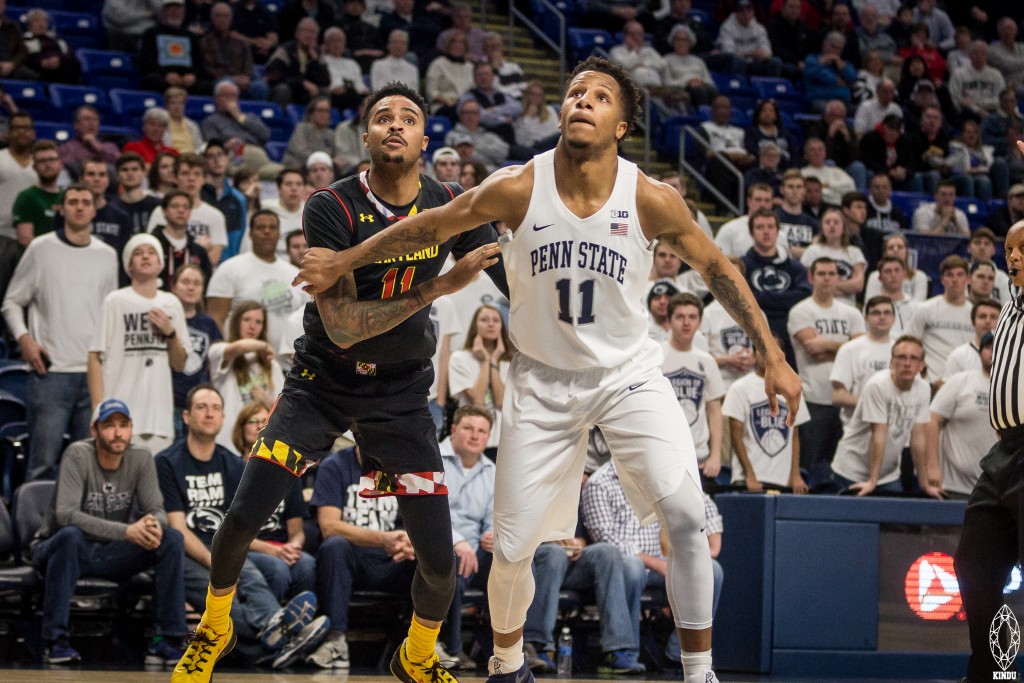 Coach Mark Turgeon thinks his Maryland men’s basketball team can still play well away from Xfinity Center, even though it’s gone 1-6 on the road this season.

That’s because the Terps finished 8-2 on the road last year, helping them earn a No. 6 seed in the NCAA tournament. Guards Anthony Cowan and Kevin Huerter, two of Maryland’s best players from last season, are this year’s leaders. Plus, Maryland’s past three road losses — two of which were against ranked opponents — have come by an average of four points.

The Terps must prove Turgeon right about their capabilities away from College Park to keep their waning NCAA tournament hopes alive. They can start with a win Wednesday night at Penn State, which would improve their postseason standing come Selection Sunday.

“I expected to win more road games,” Turgeon said, “but maybe we will down the stretch.”

Many of Maryland’s road struggles can be attributed to the lack of a go-to scorer late in games. Former guard Melo Trimble handled that role the past three years, leading Maryland to a 31-8 record in games decided by six or fewer points.

Trimble is now in the G League, and as Cowan and Huerter have tried to find a late-game scoring balance, things haven’t gone as smoothly, particularly in hostile environments.

Turgeon’s squad has outscored opponents by an average of more than six points per game at home since Big Ten play resumed Jan. 2, but it has been bested by nearly 11 points per game on the road over that span. The Terps’ lone road victory this season came in overtime at Illinois on Dec. 3, after they blew a 22-point second-half lead.

“It can’t just be, you’re reliant on the arena and the crowd to give you your energy,” Huerter said. “You should always have to find that within. Because if you don’t, you’re gonna lose, and we’ve seen that first-hand this year.”

Huerter knocked down a 3-pointer to give Maryland a lead in the final seconds at Michigan on Jan. 15, but the Terps didn’t guard Michigan’s inbound pass, leading to the Wolverines’ game-winning free throws. Cowan tried to serve as the hero in the Terps’ loss at Indiana, but he missed the potential game-tying 3-pointer.

The Terps discussed involving more players, and they found an effective formula in their 68-63 win over Wisconsin on Sunday, when Cowan and Huerter combined for 17 of Maryland’s final 19 points.

“We’ve had to reinvent ourselves four times, so when you’re doing that midseason, it’s really really different,” Turgeon said. “My guys are giving me everything they got.”

Maryland’s game Wednesday may feel as much like a neutral court as any Big Ten road test — the Nittany Lions averaged the second-lowest attendance in the conference last year, only behind Rutgers.

Still, Penn State, along with Maryland, is fighting for an NCAA tournament bid. The Nittany Lions are sixth in the Big Ten, while the Terps are ranked ninth.

“We feed off the crowds even though they’re not cheering for us,” center Sean Obi said. “There’s no one who’s nervous here.”

Maryland has struggled in February the past two years — the team dropped five of its final seven games last season. Even with center Michal Cekovsky questionable to play Wednesday (left heel), and forwards Justin Jackson and Ivan Bender sidelined for the season, Turgeon has found optimism for a strong finish in other areas.

The Terps are tied for the fifth-best assist-to-turnover ratio in the conference during Big Ten play after recording one of the country’s worst turnover margins in the country during nonconference play. Obi notched three points and six rebounds while playing tough defense against Wisconsin, helping replace the production of the injured big men.

Huerter knows Maryland needs to display those improvements on the road Wednesday with only six more games before the Big Ten tournament.

“There’s no excuse for why you can’t win on the road,” Huerter said. “You should be mentally tough if you want to be a really good team.”