A UMD student is taking his speedskating skills to the Olympics 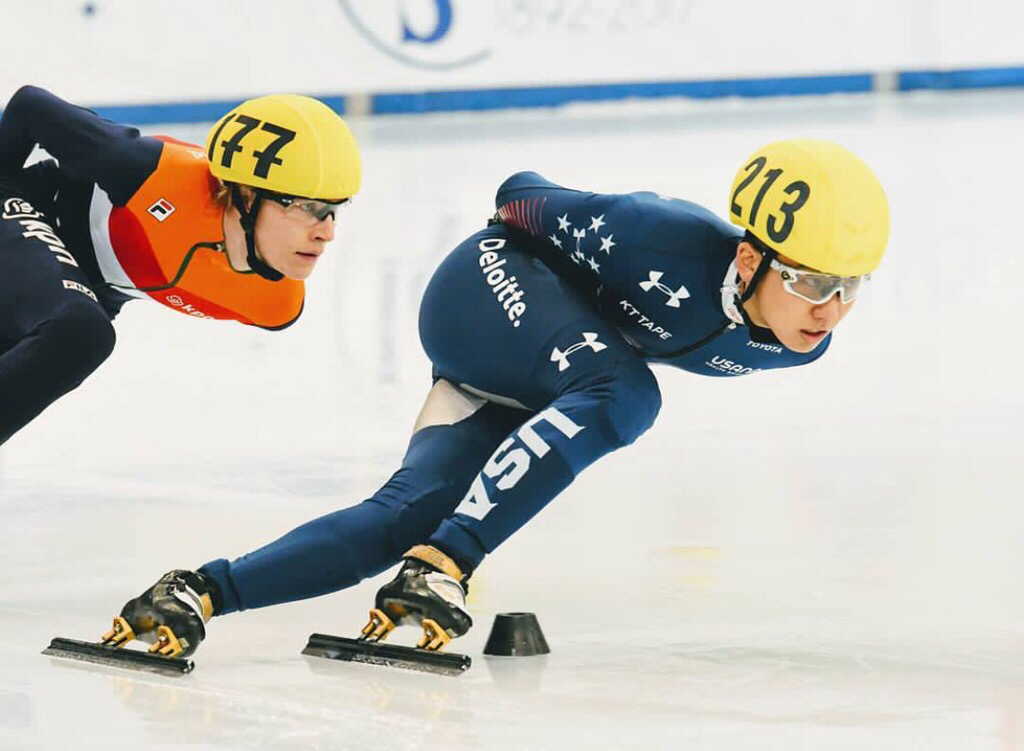 The day after he received 40 stitches on his chin, Thomas Hong strapped on his skates and stepped out on the ice.

The then-17-year-old went to Seoul, South Korea, to train and visit his father during the summer of 2015, and recalled colliding with a teammate on the Kwangwoon University rink, feeling lucky his limbs weren’t damaged in the fall. But accidents like this are part of the risk that comes with speedskating, he said.

At 20 years old, Hong — who has been skating for roughly 15 years — is the youngest man competing on the U.S. short track speedskating team in the 2018 Winter Olympics in Pyeongchang. He will compete in the 500m individual event — and its semifinals and finals should he qualify — as well as the 5000m relay, his sister said. At his first Olympic trials in 2014, Hong was the youngest competitor and finished 11th.

“He’s probably one of the most laid back people I’ve ever met in my life,” his girlfriend, Jenna Hong, said. “He really doesn’t get stressed that much, he’s not even too too stressed right now, which just is crazy.”

His friends and family, though, said if you didn’t ask, you wouldn’t even know what the South Korean-born Laurel resident has accomplished.

“I don’t really talk about it too much. My friends and the people I grew up with know that I’ve been skating,” Thomas Hong said. “They know about my accomplishments because they care about my well-being and care about how I do in this sport, but I don’t really try to push my agenda on other people.”

[Read more: UMD’s new Special Olympics college chapter is the first of its kind in Maryland]

Hong said he doesn’t like to discuss skating with others and would rather try to find common ground through his interests outside the sport. He studies finance in the business school and likes to binge-watch Parks and Recreation and The Office with his girlfriend and listen to Kendrick Lamar.

Despite training while going to school, Hong is still competitive at the international level. When he isn’t in his classes, he’s training, he said. Off the ice, he watches videos of his practices every day to improve his skating.

“I use video as a tool to not only engage how I’m doing, but also how my teammates and my competitors are doing to understand their tendencies,” Hong said. “In a sense, by watching a lot of film, I study the sport and try to apply it to myself.”

Jeff Simon, Hong’s former coach at the Potomac Speedskating Club, called Hong’s talent unique because unlike other speedskaters in other countries, Hong does not receive subsidized housing and cannot train as extensively due his student schedule. Simon said his work ethic will allow him to go far beyond his athletic pursuits.

“Thomas has done most of this, basically without help,” Simon said. “And it would be pretty interesting to see what he could do with the opportunities that are presented to the majority of other professional athletes.”

His sister, Stephanie Hong, said she was the first in their family to pick up skating, but she stopped in seventh grade because she hated it. It was her brother who had the passion for it.

In addition to his skating career, Thomas Hong chose to study at University of Maryland after high school. He is studying over all four academic terms this year and hopes to graduate in 2020, she said. But many speedskaters at his level choose to move out to Salt Lake City, Utah, to train full-time and take online courses should they choose to pursue higher education.

“That was not an option for our family,” Stephanie Hong said. “That’s why our family came [from South Korea to] here, not just for the United States, but also to have a strong education. And Thomas also has a passion for education.”

Junior finance major Jenna Hong said her boyfriend has always been able to maintain a level of respect for his friends’ and family’s time despite tackling a heavy load both at school and with his speedskating career.

“I know even if he’s stressed about skating himself, he’ll still go out on the ice and put everything out there, because it’s what he loves to do at the end of the day,” she said.

Thomas Hong, who took a year off school after completing his first year at this university to train, said he didn’t want to focus too much on the social aspect of college so he could focus on his career and studies.

He said there’s limited funding from the U.S. Olympic Committee in speedskating, and he knows his skating career will come to an end one day, so he dedicates himself to school as well.

“My family and I made the decision for me to at least get my foot in the door into college, and I want to say, it gives me an advantage,” he said. “It differentiates myself between so many other athletes that are doing the same thing.”

Hong said he feels like he hasn’t reached perfection, and the drive to improve is why he truly loves to skate.

“I just find it really interesting to pursue perfection in such a simple thing,” Hong said. “I just like the details of our sport. There’s simplicity within the complexity.”