Our obsession with school rankings is making our education system worse 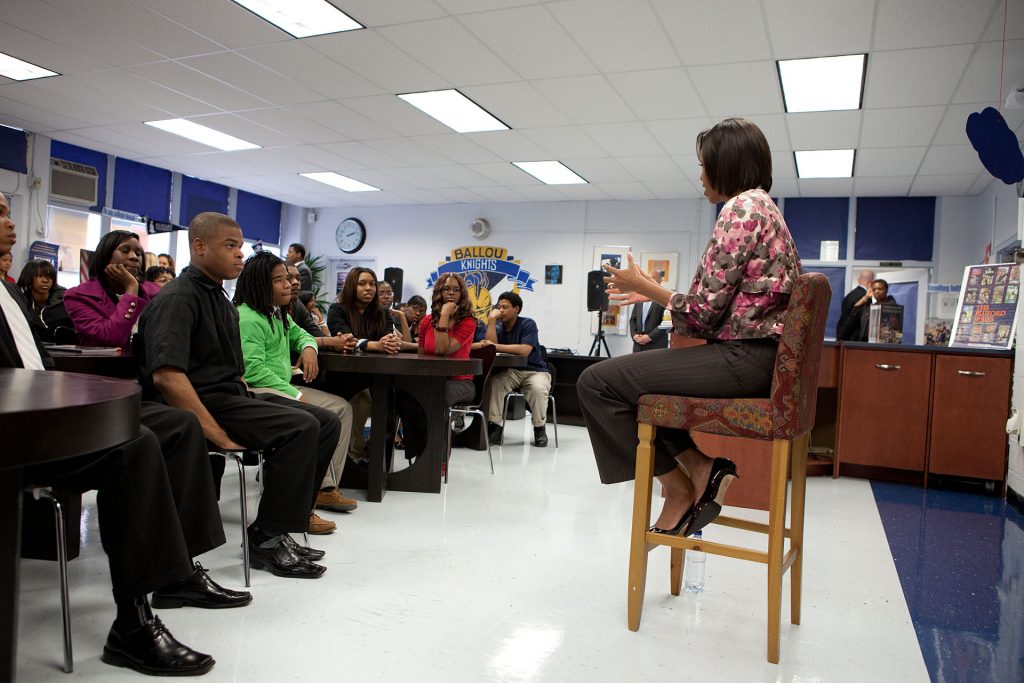 First Lady Michelle Obama shares her experiences with students at Ballou High School in Washington, D.C., March 30, 2011. Mrs. Obama encouraged them to encourage them to strive for excellence while pursuing their career goals. (Official White House Photo by Chuck Kennedy)

Late in 2017, it was revealed that Ballou High School administrators had aided graduation rates by graduating 164 students when “only 57 were on track to graduate,” according to a NPR report. The administrators at the school were reported to have pushed teachers to give make-up assignments to students who had missed too much class to actually pass. One in five students at Ballou were absent more than they were present, “missing more than 90 days of school,” also according to NPR.

Administrators pressuring teachers into passing failing students is not unique to Ballou High School. In a survey conducted by the Washington Teachers’ Union and EmpowerEd — a local teachers advocacy group — 47 percent of participating teachers said they felt an administrator had coerced them to pass a failing student or change their grade.

This represents a larger problem — educational institutions care more about their reputations than educating and preparing their students for whatever their plans are after high school. Graduation rates in this situation are similar to college rankings, which college applicants, students, graduates and administrators seem to care about very much. Their rankings, just like high school graduation rates, aren’t at all representative of everything going on at an institution. In Ballou High School, many students come from lower socioeconomic backgrounds and had many more responsibilities than simply completing their homework and attending class.

One student mentioned to NPR reporters that during her senior year at Ballou, she was no longer living at home and was working at a restaurant to pay rent. Attending class wasn’t her first priority because she needed a roof over her head and food to eat first. Graduation rates do not take into account the diverse student bodies at different high schools; they assume that all students have the same chance at graduating, and therefore a school with a low graduation rate must simply be a bad school. Things are rarely that simple.

US News’ college rankings are frequently referenced while applicants make decisions, but as an opinion columnist for the New York Times says, those rankings “are a joke.” A university cannot be reduced to a ranking, and there is no way to condense the many different properties of a school into a number. The column’s author had visited the University of Maryland, Baltimore County, ranked 159th on US News’ national list. What he found was a school with a diverse student body, plenty of academic, athletic and professional achievements, and a unique atmosphere.

When I was applying to college, as a student attending a high school in Maryland, I had many peers show an aversion to attending the University of Maryland because of its ranking as 61st. Many of my peers were embarrassed to attend a university with a ranking lower than 20, ignoring the fact that a high-ranking Ivy League school may not actually be the best fit for them as an individual. The weight placed on rankings seemed to render not only the school but applicants themselves as one-dimensional figures without complex needs and identities that should fit with the school they attend.

Every university is different, and every university has its pros and cons depending on what a student is looking for in a school. An overall ranking isn’t going to tell you whether the program you are interested in is the best in the nation, whether the faculty at the school will have diverse identities that represent you, or whether the value system of the school is similar to yours. Colleges have lost sight of the fact that having a high ranking doesn’t mean your school will be the right fit for every high-scoring student.

Like some of the schools in the Washington, D.C., school system — and likely others across the nation — reputation has overtaken the need to help students become as successful as they possibly can be for colleges. This has created a culture where high schools like Ballou think their reputation matters more than their students understanding of the material, and where colleges will do anything to improve their rankings. It has allowed them to forget that all schools have values and qualities that will or won’t work for individual students. We have forgotten the bottom line of the education system: Schools are for the students.