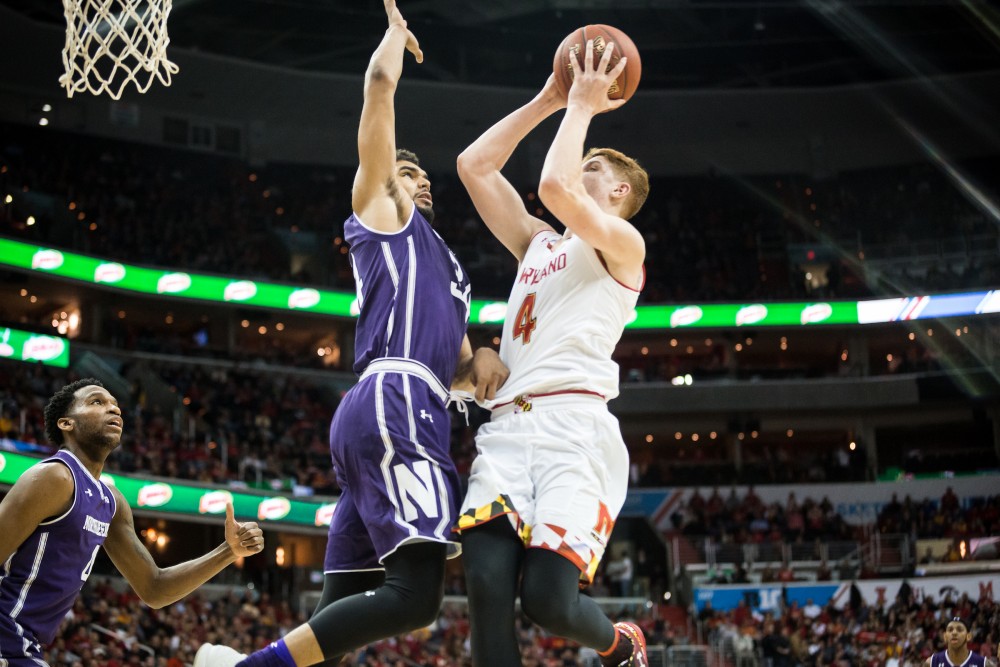 ANN ARBOR, Mich. — Guard Anthony Cowan put his hands on his head while walking down the Crisler Center court and crouched past the midcourt line, taking a moment to process what just occurred before joining the Maryland men’s basketball team’s huddle.

Maryland was 3.5 seconds away from sealing its first statement Big Ten win after guard Kevin Huerter sank a 3-pointer to provide the Terps a one-point lead. But forward Bruno Fernando fouled forward Muhammad-Ali Abdur-Rahkman on the following possession after he raced past Cowan, leaving the sophomore in disbelief his 24 points and the team’s frantic comeback were going to waste.

Abdur-Rahkman made both free throws, and Huerter’s three-quarters court lob at the buzzer fell short, as No. 23 Michigan handed Maryland its third consecutive road defeat, 68-67.

“Our first mistake was celebrating too much [after Huerter’s shot],” Cowan said. “We should’ve just went back to the bench and got a game plan on defense. But we didn’t.”

Michigan guard Zavier Simpson missed a pair of free throws after Cowan’s trey, and Maryland secured the rebound. The Terps ran screens for Huerter, who got free at the top of the key and converted a 3-pointer for his 10th point of the half.

Maryland used a full-court press to try to contain Michigan on its final possession. Huerter, who was guarding Abdur-Rahkman, called Cowan for a switch. Cowan had his back to the ball, allowing Abdur-Rahkman to catch an inbound pass that travelled over the halfcourt line. The Terps provided Abdur-Rahkman a clear path to the hoop, allowing the senior to seal the victory.

This wasn’t the same script as Maryland’s road blowout losses to Michigan State and Ohio State over the past two weeks, but the Terps, who held a team meeting Sunday night to discuss their unacceptable road performances, endured a similar pain.

“This one hurts the most,” Huerter said.

Entering Monday, Turgeon scolded his team’s defense, claiming the Terps’ poor effort led to their blowout losses at Michigan State and Ohio State. Maryland had allowed its past three opponents to shoot a combined 56.4 percent from beyond the arc.

Like in their previous road defeats, the Terps again started strong Monday. While Michigan (16-4, 5-2) missed open shots at times, Maryland hardly provided the Wolverines, who defeated Michigan State on Saturday, room around the basket as they shot 31 percent in the first half.

Maryland’s scoring droughts toward the end of the first half allowed Michigan State and Ohio State to take control, and Michigan used a 14-0 run to tie the game at 30 just over three minutes into the second period.

The Terps answered with a 7-0 spurt, but that’s when the Wolverines drained five straight treys. Michigan shot 9-for-17 from beyond the arc in the second half.

Cowan continued to lead the Terps, but Maryland, which was playing without guard Dion Wiley (concussion), in addition to forwards Justin Jackson and Ivan Bender, only scored eight bench points, compared to Michigan’s 24.

Much of the reason Maryland landed a No. 6 seed in the NCAA tournament last season was because of its 8-2 record on the road. But this year’s Terps, who host Minnesota on Thursday, haven’t displayed the poise to close out wins in hostile environments.