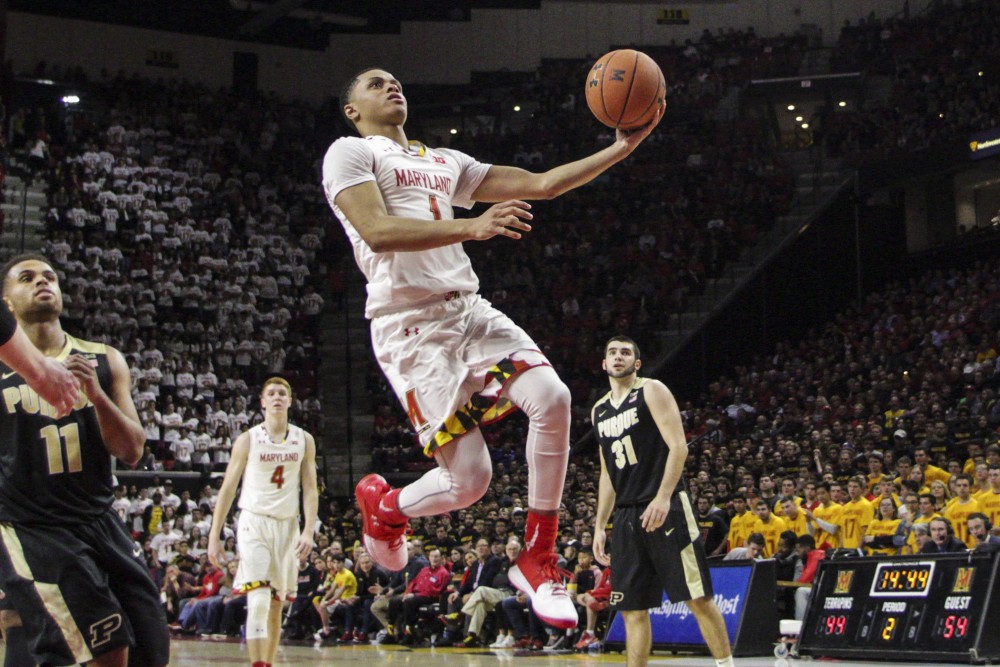 Maryland men’s basketball guard Darryl Morsell remains at Xfinity Center after almost every practice to hoist extra shots, doing anything he can to break out of the shooting slump that’s mired him this season. Morsell’s wrist has grown sore because of the extra training, and he’s forced to ice and heat his wrist everyday.

But that practice paid off in Maryland’s 75-69 win over Penn State on Tuesday night.

The freshman was shooting 1-for-13 from beyond the arc entering the game and missed his first two 3-point attempts against the Nittany Lions. So with 4:36 remaining, Penn State left Morsell open for a corner three.

Morsell drained the trey, tying the game at 61 and sending the the Xfinity Center crowd of 14,374 into a frenzy.

That shot bridged Maryland’s 9-0 run as the Terps took their first lead since the opening minute of the second half, helping them hold off the Nittany Lions in their first Big Ten game in over a month.

“That was a big load off his shoulders and our team,” coach Mark Turgeon said. “I felt like when that went in, we were going to probably win the game.”

On the possession after Morsell’s 3-pointer, center Michal Cekovsky finished an and-one dunk, a display of toughness Turgeon said set the tone for his squad. Maryland (13-3, 2-1 Big Ten) maintained a slim lead from there, and Nittany Lions guard Josh Reaves’ 3-pointer with 22.4 seconds left cut Maryland’s lead to two.

Guard Anthony Cowan (game-high 18 points) sunk a pair of free throws on the next possession, and Penn State (11-5, 1-2) then missed two shots. The Xfinity Center crowd again roared as forward Bruno Fernando jogged down the court waving his arms with the victory all but clinched.

“Coach always says we don’t have time to feel sorry for ourselves,” Cowan said. “Through the circumstances, all we can do is play hard now.”

Guard Kevin Huerter said he and Cowan would have to “bring it” every game with forward Justin Jackson out for the remainder of the season with a torn labrum. But Huerter played just six first-half minutes due to foul trouble and didn’t score his first point until the 11:03 mark of the second period.

Cowan led the Terps by playing the whole game, and Huerter found his groove in the final 10 minutes to finish with 13 points.

“Me and Kevin just have such a great chemistry,” Cowan said. “It was hard to have him out in the first half. In the second half, our offense kind of flowed a little better with him on the floor. He knows we need him on the floor.”

On Sunday, Maryland announced forward Ivan Bender (torn right meniscus) would join Jackson on the sideline for the rest of the season, but the Terps had little trouble finding frontcourt depth. Fernando recorded 17 points and 11 rebounds for his first double-double and Cekovsky finished with 10 points and six rebounds.

The Terps entered Tuesday averaging 16.5 turnovers per game, while Penn State had forced 16.67 giveaways per contest. Maryland played slower with Jackson and Bender out, committing just five giveaways. But the Terps failed to pull away until the final four minutes, partly due to their 67.6 percent free throw shooting. Three Penn State players recorded at least 15 points.

The Terps, though, made their shots when it mattered, beginning with Morsell’s clutch trey, to secure an important conference win before they visit No. 1 Michigan State on Thursday.