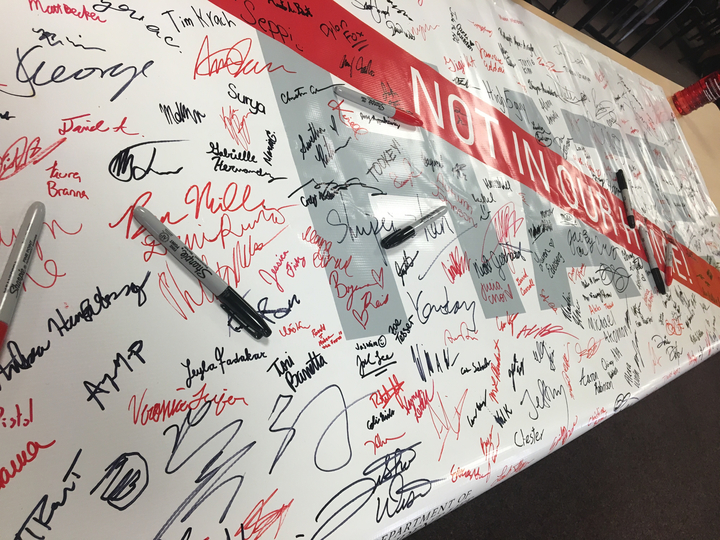 While many members of the University of Maryland community expressed support for the new hate bias coordinator position and recent policy changes, several remain skeptical about whether it will create more transparency among the administration and officials.

This university announced on Nov. 27 that the coordinator will meet with individuals affected by hate bias incidents as requested and work with a hate bias response team to develop action plans for these incidents. Additionally, the Office of Diversity and Inclusion will keep the university community aware of hate bias incidents via an online log updated as they occur and optional email alerts.

University President Wallace Loh said one of the most important changes in policy is outlining how the three university entities tasked with responding to hate bias incidents — the ODI, the Office of Civil Rights and Sexual Misconduct and University Police — will coordinate with one another.

“There should be a support structure that can mobilize very quickly to support [victims of hate incidents] and is coordinated,” Loh said. “Right now it is not coordinated, so to have somebody who can pull things together — that’s helpful. Not only helpful, it’s necessary.”

Miranda Mlilo, a member of ProtectUMD and the president of Students for Justice in Palestine, questioned why these changes hadn’t been implemented sooner.

“Until I actually see it in place — and working and effective — I can’t say whether or not these will be good enough policies,” said Mlilo, a junior environmental science and policy major. “It could be something that the university is saying in order to act like they’re doing something, act like they’re responding to student concerns, because right now we’re in the public eye.”

This university has faced a recent increase in hate bias incidents. University Police charged a former university employee with malicious destruction of property after a swastika was found spray-painted on a campus trash cart in September. Three incidents involving offensive language and/or drawings, including a swastika, were also reported in the men’s bathroom of the North Campus Dining Hall between Sept. 28 and Oct. 9.

The change in policy comes after many called for better communication and more transparency about hate bias incidents during a meeting in mid-November where students living in Somerset Hall revealed there was a etching of a Confederate flag found in a dorm bathroom.

Zach Caplan, a freshman government and politics major who lives in Somerset Hall, said many of the residents were pleased with the changes.

Hiring a hate bias coordinator is a “good first step” to address hate bias on the campus, said Arthak Adhikari, a senior economics major. He said students will need to be aware of the resources for it to be effective.

“This is the first I’ve heard about this,” Adhikari said. “If they do more reach-out stuff, then maybe it’ll be effective. But other than that, I don’t know.”

The university communications office posted the new position and policies on numerous university websites, including the ODI’s website and UMD Reflects, university spokeswoman Jessica Jennings wrote in an email. It has also been put on social media channels across the university, as well as the ODI listserv.

Lee Ahmed, a junior computer science major, said it’s “cool that they’re advocating for people who were affected by [hate bias]” by hiring a coordinator, but only if that coordinator has an open-door policy.

“If it’s just super busy scheduling and it’s just there for face value, then that would suck,” Ahmed said. “But other than that, I appreciate the sentiment.”

Ahmed added this university’s response was more than he was expecting.

“I thought it was just going to be business as usual or whatever, but the fact that they’re opening up a new position to address these issues, it seems like they’re trying at the very least to address the issues that have been coming up recently,” he said.

The recent hate bias incidents have followed an academic year filled with racial tension. Second Lt. Richard Collins, a black Bowie State University student, was fatally stabbed near the Montgomery Hall bus stop in May. Sean Urbanski, a white former student of this university, has been charged with a hate crime, as well as first- and second-degree murder, in the killing.

There were also five reported instances of white nationalist posters on the campus since December 2016, and a noose was found in a fraternity house in April.

Donald Kettl, a public policy professor, said the plan strikes him as “sound policy” and a “good, strong start.”

“With relatively new initiatives, it will be important to get feedback along the way, to adjust it as time goes by,” Kettl said, adding that some of the biggest issues the university will face are anticipating what kinds of issues could arise, providing strong responses that build trust among the campus community and improving the overall campus climate.

“That’s not the kind of thing that is just the responsibility of the university’s administration, or of any particular group on the inside,” Kettl said. “It is something that really involves and requires a partnership among administrators, faculty and students to try to understand and explore the big issues.”