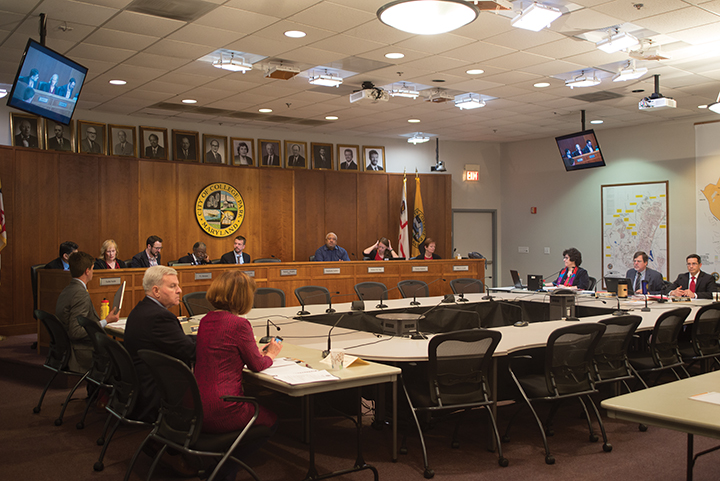 The goal of the changes is “to streamline the process, to make it easier to get a variance and make it more clear when a variance is warranted, [and] to ease up on the restriction on front yard fences and garden fences,” Mayor Patrick Wojahn said before the meeting.

In 2005, the city adopted its own ordinance because it wanted stricter regulations than those in Prince George’s County, City Planning Director Terry Schum said at the July 11 meeting.

The ordinance adopted in 2005 did not allow front yard fences and prohibited chain link as a replacement material in front yards, each with some exceptions, Schum said. It also required permits to install fences on residential properties, and established a requirement that fences must be set back 25 feet from any street, she added.

The new ordinance allows front yard fences at or below 3 feet tall, eliminates the setback requirement on corner lots and modifies certain criteria for obtaining variances, among other policies.

Residents spoke at a public hearing in July on the regulations, raising issues with the difficulty of getting a permit or variance, according to the city’s agenda. On Tuesday, they weighed in again with their concerns.

The new ordinance does not require a permit for garden fences in a front yard, if the enclosed area does not exceed 25 percent of the front yard and is at least 4 feet by 6 feet. Materials for these fences are limited to open wire mesh, and fences must be removed once the garden is no longer in cultivation.

Suchitra Balachandran, another CBE member, said she thought someone would need a permit to enclose more than 25 percent of their garden — a provision she thought should be removed.

“[The Committee for a Better Environment] feel[s] that any biodiversity and planting should be encouraged, and frankly we feel that lawns should be discouraged,” Balachandran said. “We just think that if residents are given the opportunity, they might have a beautiful garden with a beautiful front yard fence and a lot of interesting things growing in there.”

Rick Hudson, a District 1 resident, said the council may want to delay the changes and table the issue, because it’s “real confusing.”

“Not understanding the laws and not understanding what’s going on really kind of made a fool of us on national TV here not too long ago,” he said. “So, I would just say I’m against it right now, just because I don’t think it really sounds like anybody really understands it.”

District 1 Councilwoman Christine Nagle said the ordinance “represents a compromise, between members of the community and the council.”

“The revised ordinance, at least before tonight I believe, was easier for residents to understand, while maintaining the character of our neighborhoods.”