Review: ‘The Breadwinner’ has beautiful animation and a powerful story 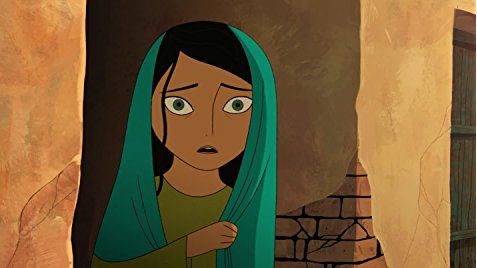 The Breadwinner is the touching story of courage and creativity of one girl who must grow up quickly and learn how to take care of her family.

Angelina Jolie produced the animated film, which follows Parvana, a young girl in a Taliban-controlled Afghanistan, where women have very little place in society. When her father is taken, Parvana must cut her hair and pretend to be a boy so that she can provide for her family.

The animation style feels almost like a portrait, but the backdrop is just as important as the characters and their movements. Markets and smoke stacks capture the world in which this small story takes place. This makes the film feel more real and grounded, and gives a deeper context to the story that resonates from one scene to the next.

Parvana, like her father, loves stories — this drives the movie forward just as well as the plot itself, as it gives all the information about Parvana a viewer needs. Her character is revealed through the stories she tells her brother to help her mother when she’s home. The animation style shifts every time Parvana tells a story, clearly indicating the imagination of the young woman and perhaps her brother. The artwork is simpler, appearing more like paper dolls against a backdrop and giving a youthful shift to the narrative.

The stories, while perhaps the movie’s greatest strength, can also be regarded as a weakness. The movie frequently pauses for little stories, and though they always add to the main story and provide some new insight to the characters, culture and plot, they break up the main story a little too much. The filmmakers should have chosen the best stories to animate or perhaps shortened some of them so that they didn’t depend so much on tales that were not part of the main narrative.

At times, the tone of the movie can seem a little all over the place. Though the subject matter is heavy, at times, the movie feels like a dramatic, heart-wrenching film, and then a fun family film. This again relates to the story-telling, when Parvana tells her brother an admittedly cute story, that feels out of place with its humor. There is absolutely room for humor within the story, and it could even make the film more heartwarming, but the style of humor in the story feels forced and unnatural.

One of the repeated thematic elements is Parvana’s desire to return her father’s walking stick to him in prison, as he lost his leg in combat. The movie’s crutch is the storytelling, but it could definitely find a way to reach its point without it.

Ultimately, the movie achieves its intended goal — telling a story that’s important, empowering and worth listening to.