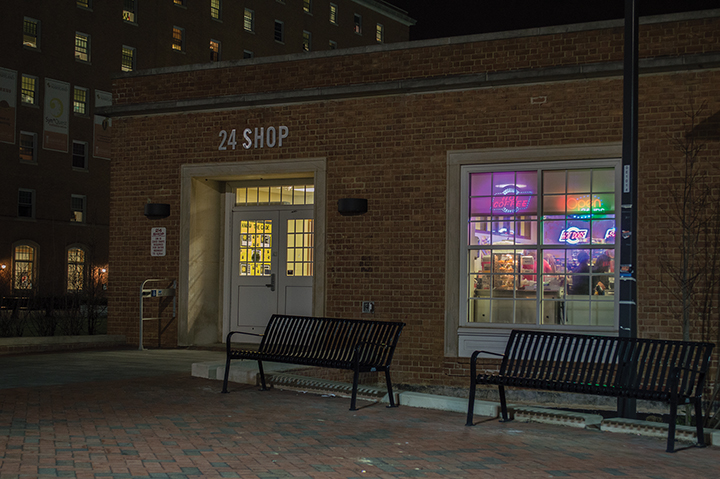 The 24 Shop is located in the Denton community.

The SGA Sustainability Committee is working to implement free reusable shopping bags at the University of Maryland’s campus convenience stores.

If implemented, students would have the option of bagging purchased items from campus convenience stores in plastic bags or reusable bags. After students are done with the reusable bags, they would take them to a designated drop-off location.

The Department of Resident Life or Dining Services would pick up the bags and return them to campus stores, said Will Klajbor, the committee’s director.

The committee has been working on its initiative throughout the fall semester to reduce the number of plastic bags that are handed out at campus stores, such as the 24 Shop and Commons Shop, Klajbor said. The initiative would also increase the options available for students who don’t want to use plastic bags, he added.

“I think as students we’re all seeing a lot of plastic bags being handed out by these on-campus shops, sometimes when they don’t need to be,” said Klajbor, a senior economics and environmental science and policy major.

In a Student Government Association survey of 158 undergraduate students from across colleges at this university, 146 students said they would choose reusable shopping bags over plastic bags if given access.

Campus convenience stores sell reusable bags for about $7, which is too expensive for the average student, Klajbor said. The bags are also not as well-advertised as they could be, he added.

Some people would be more likely to pick up the free reusable bags if they are stationed next to the cash register at the shops, Klajbor said.

“We think we’ve kind of reached a point in our culture … that we understand the effect that [plastic] has on the environment,” Klajbor said. “Knowing all of these things and being smart students … people are going to opt to choose the reusable option.”

Plastic’s chemical makeup is harmful to the environment, particularly for marine life. At least one-third of debris on beaches is from single-use, disposable plastic, like plastic bags, according to the Environmental Protection Agency.

Strategic placement of drop-off bins and advertisement posters, in areas potentially including dorms, will increase student participation and proper use of the system, said committee member Kendall Grady.

“[It’s] not just making sure everyone knows what we’re trying to do and why we’re trying to reduce plastic bags, but how beneficial it can be if everyone does their part,” said Grady, a junior environmental science and policy major.

The success of the reusable bag program would depend on factors such as dropoff locations and the cleanliness of the bags, said Adrienne Small, a recycling specialist at this university.

While the committee has not yet determined the bag it would use, one made of anti-microbial material would be best to maintain hygiene, said committee member Lily Kilduff. Reusable bags made with this material look like those found in grocery stores, but limit the growth of bacteria that can accumulate from some food products.

“I think the materials would be one of the things that’s a make or break for this system,” said Kilduff, a senior sociology major.

Dining Services Assistant Director for New Initiatives Allison Tjaden said while she has not discussed the drop-off system with the SGA committee, she is looking forward to brainstorming with the committee to move the project forward.

“I’m a proponent of piloting new projects and initiatives,” Tjaden said. “But I can’t say without seeing [the plan].”

The committee originally met with Tjaden in September to discuss the possibility of a tax or ban on plastic bags at this university. After discussion, they ultimately agreed this university should add options, rather than take them away from students, Klajbor said.

A tax or ban would be too harsh on the student community, Klajbor said.

“A big part of environmentalism and sustainability is that open communication and not trying to force ideology and opinion on other people,” Klajbor said. “As a group we decided a ban or tax was something that wouldn’t be viewed favorably by the student community.”

The committee members do not know how much the bags would cost, but would look to the University Sustainability Fund or SGA reserves for funding, Klajbor said.

[Read more: RHA hopes to cut down the use of plastic bags on campus]

The committee will know more details about the future of the program after meeting with Dining Services in December, Klajbor said.

The Office of Sustainability is supportive of a program like the one the SGA committee is working on because one of the basic principles of sustainability is reduce, reuse and recycle, said Andrew Muir, a spokesman from the office.

“Encouraging and fostering a culture of that on campus — I think that’s really important,” Muir said.