“I can make a difference”: College Park Mayor Patrick Wojahn reflects on his career 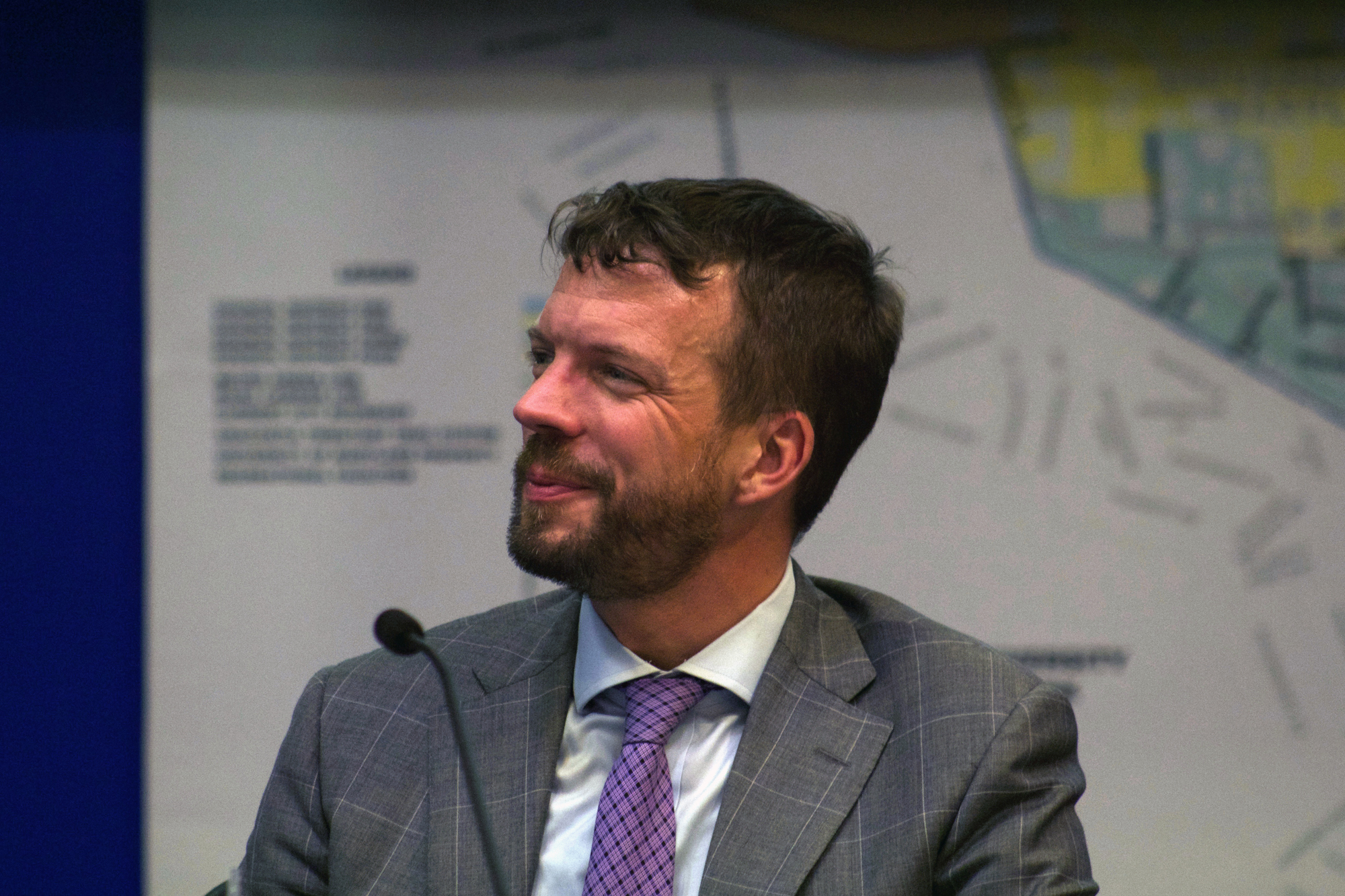 The day after College Park Mayor Patrick Wojahn was re-elected in the most contested mayoral race in city history, he received an unexpected phone call.

It was from a young resident, who told Wojahn he had just come out as gay a few weeks earlier. He watched the election, and he wanted tell the city’s first openly gay mayor that he appreciated his public service.

“He felt that by me being out and being who I am, that it made life easier for him,” Wojahn said. “That’s the sort of thing that makes this all worth it — the long hours and standing in the rain on [Election Day] for 13 hours and the sleepless nights … that I can make a difference in someone’s life.”

That desire to make a difference has manifested in different ways, from legal work to volunteering, throughout the two-term mayor’s life. But it was a trip to study in Russia, when Wojahn was a junior at the University of Wisconsin-Madison, that opened his eyes to the possibility of a future in the political sphere.

In the mid-’90s, while volunteering for an HIV/AIDS education and advocacy center called Aesop in Moscow, he saw several organizers abroad facing repression, as well as violence and attacks from police. But Wojahn called it “a time of real optimism” thanks to advocacy efforts and the passage of a nondiscrimination law in the face of adversity.

“In some ways, at the time, it was more advanced than LGBT rights in the United States was,” Wojahn said. “Unfortunately, things have taken a turn for the worse since then in Russia — but at the time, it really inspired me.”

Laura Kaegebein, Wojahn’s older sister, said she noticed a clear change in her brother when he got back from Russia and Germany.

“His experiences abroad really kind of matured him, but also got him thinking about the world and how he could make a difference,” Kaegebein said.

When Wojahn returned, he ran for student government in April 1997 and was elected vice-chair. In 1998, after graduating with bachelor’s degrees in international relations, German and Russian, he deferred his acceptance to Georgetown Law for a year to work for WisPIRG, a lobbying group, as a campus organizer at the University of Wisconsin-Milwaukee.

“That was kind of like an organizing boot camp,” Wojahn said. “They really put a lot of resources into training their employees. So, from my year working with them, I really learned a lot about how to run a campaign.”

While in law school, Wojahn met his future husband, Dave Kolesar, who was pursuing his master’s degree in electrical engineering at Catholic University. The pair knew they wanted to move in together after Wojahn finished school in 2002, and Kolesar, a Cheverly native, knew where to look.

College Park “fit the bill,” as it was relatively affordable and close to public transportation, Wojahn said.

It was hard for Wojahn to find jobs doing policy work after he earned his law degree, he said. His first position after graduating was a year-long stint as a law clerk at the D.C. Superior Court for Judge John Campbell. He worked in legal services for about eight years after, he said, before becoming a public policy analyst for the National Disability Rights Network. In May 2014, he started as the director of government relations for Rails-to-Trails Conservancy, where he still works full-time. The D.C.-based nonprofit aims to create a national trails network from unused rail lines, and Wojahn advocates for trails and safe bicycle and pedestrian networks.

Wojahn said he never necessarily expected he’d run for public office. But when the District 1 council members didn’t run for re-election in 2007 — about the same time he and Kolesar were among the 19 plaintiffs who lost Maryland’s same-sex marriage lawsuit — he decided to give it a shot.

“College Park is a great place to live, and it’s a place with a lot of potential — a lot of untapped potential — and I felt that I could do a lot for the community by running,” Wojahn said.

Kolesar said he rolled his eyes when Wojahn said he wanted to run for District 1 councilman.

“So like, ‘Oh boy, here we go,'” Kolesar said. “But you know, God bless him. He genuinely wants to make a difference. Maybe it’s because he’s from the Midwest. … Having grown up in the D.C. area, you kind of become a little more cynical and jaded toward politics, but Patrick is much more optimistic about politics than I am.”

On the council, Wojahn spearheaded a proposed change to the city’s charter that said the city would not discriminate in jobs, housing or public accommodation because of religion, gender or sexual orientation, among other factors.

Wojahn also helped form the Neighborhood Stabilization and Quality of Life Workgroup, which devised more than 70 strategies to “address the long-standing tensions in our city between students and long-term residents,” he said in 2015.

Wojahn called that year an “exciting time for the city,” prompting him to run for the vacant mayoral seat. He won the most competitive election in decades, defeating District 4 Councilwoman and Mayor Pro-Tem Denise Mitchell. In the 2017 mayoral election on Nov. 7, Wojahn was re-elected to his position, winning the four-way race in a landslide.

‘Always on the go’

Wojahn splits his days between his job at Rails-to-Trails and his mayoral work, to which he devotes at least 30 hours per week.

“There’s often times where he’s gone by seven in the morning, and he comes home at 10 at night with various meetings,” Kolesar said, adding with a laugh that even though he doesn’t see his husband very much, “I’m a bit of a loner, so that’s OK.”

The city council’s student liaison, Chris Keosian, worked closely with the mayor over the summer as a transportation policy intern for Rails-to-Trails. He said he was impressed by how Wojahn balances his responsibilities.

Wojahn said he tries “to take some time for [him]self every once in a while,” by spending time doing things such as biking, which he’s done ever since he was little, and running.

He also enjoys getting out in the community by going to farmers markets, running a weekly timed 5K in College Park and going to The Clarice Smith Performing Arts Center and MilkBoy ArtHouse for music performances, he said.

“He’s always going to support some group or some person,” said Janie Gaylor, Wojahn’s neighbor and a District 1 resident. “He’s always on the go, doing something for someone.”

Late in Wojahn’s first term as mayor, the council introduced a charter amendment that would extend city voting rights to non-U.S. citizens, generating controversial buzz that put College Park in national headlines. The amendment appeared to pass on Sept. 12.

But days later, city officials announced that the proposal hadn’t received enough votes due to a measure requiring six votes for changes to the city charter. The six-vote requirement was in violation of state law, officials determined after legal review. Still, the noncitizens voting measure didn’t pass.

“I’ve never thought of us as anything but the highest degree of professional,” Keosian said the weekend after city officials announced the measure did not pass. “To miss something this big is pretty embarrassing.”

District 2 Councilman P.J. Brennan, who has served on the council since 2013, said he thinks Wojahn has executed his role as mayor “professionally” and “with a lot of integrity.”

“One thing that people don’t really realize with Patrick is that he does not stop — he has more energy than the whole council combined,” Brennan said. “He is constantly going to meetings, learning new information, talking to new people, from the time he gets up in the morning to the time he goes to bed at night.”

Zari Malsawma, a District 4 resident who competed against Wojahn for mayor, said “in terms of being rewarded for his campaign efforts, [she] thinks he deserve[s] it,” but said they have different visions for the city-university partnership, among other issues.

“In terms of what he wanted to accomplish, I think he was successful [as mayor for the last two years],” Malsawma said. “But I don’t agree with his focus.”

One of Wojahn’s focuses is the growing partnership between the city and University of Maryland. Wojahn said in a Oct. 30 mayoral debate that he views the city-university partnership as “a symbiosis,” as the two mutually benefit from the relationship and “rise and fall together.”

In his past two years as mayor, the city has partnered with this university on initiatives such as the planned transition of a dilapidated former school site on Calvert Road into a child care facility and a joint bike-share program in collaboration with bike-sharing company Zagster.

Jonathan Artis, Wojahn’s next-door neighbor who moved into the area in November 2015, said he likes Wojahn’s positive outlook for the city and his perspective on the city-university partnership.

“Me as a new resident, I think working with the university is better than trying to go against them, I mean, that doesn’t help anybody,” Artis said. “Mayor Wojahn’s message — ‘let’s continue to work with the university, we’re not always going to agree on everything, but they’re a partner, and if they fail, we fail’ … I agree with that message.”

Wojahn, whose campaign centered on issues such as transportation, sustainability and development in downtown College Park, said that while no one knows what could happen in the next two years, he imagines it’s “very likely” he’ll run again in 2019.

He said he’d like to take on new challenges in the future, adding that he could see himself on the Prince George’s County Council or serving in the Maryland House of Delegates.

“They’re very different roles that take on very different things, so I think either one of those could be a challenge that would offer some new opportunities for me in different ways,” Wojahn said, “but I’m playing it by ear.”

Kolesar said he’d probably give his husband another eye-roll if he runs for mayor again or pursues a higher office.

“He’d probably do very well,” Kolesar said. “I know I am a bit biased in saying this, but the political world probably needs more people like him.”