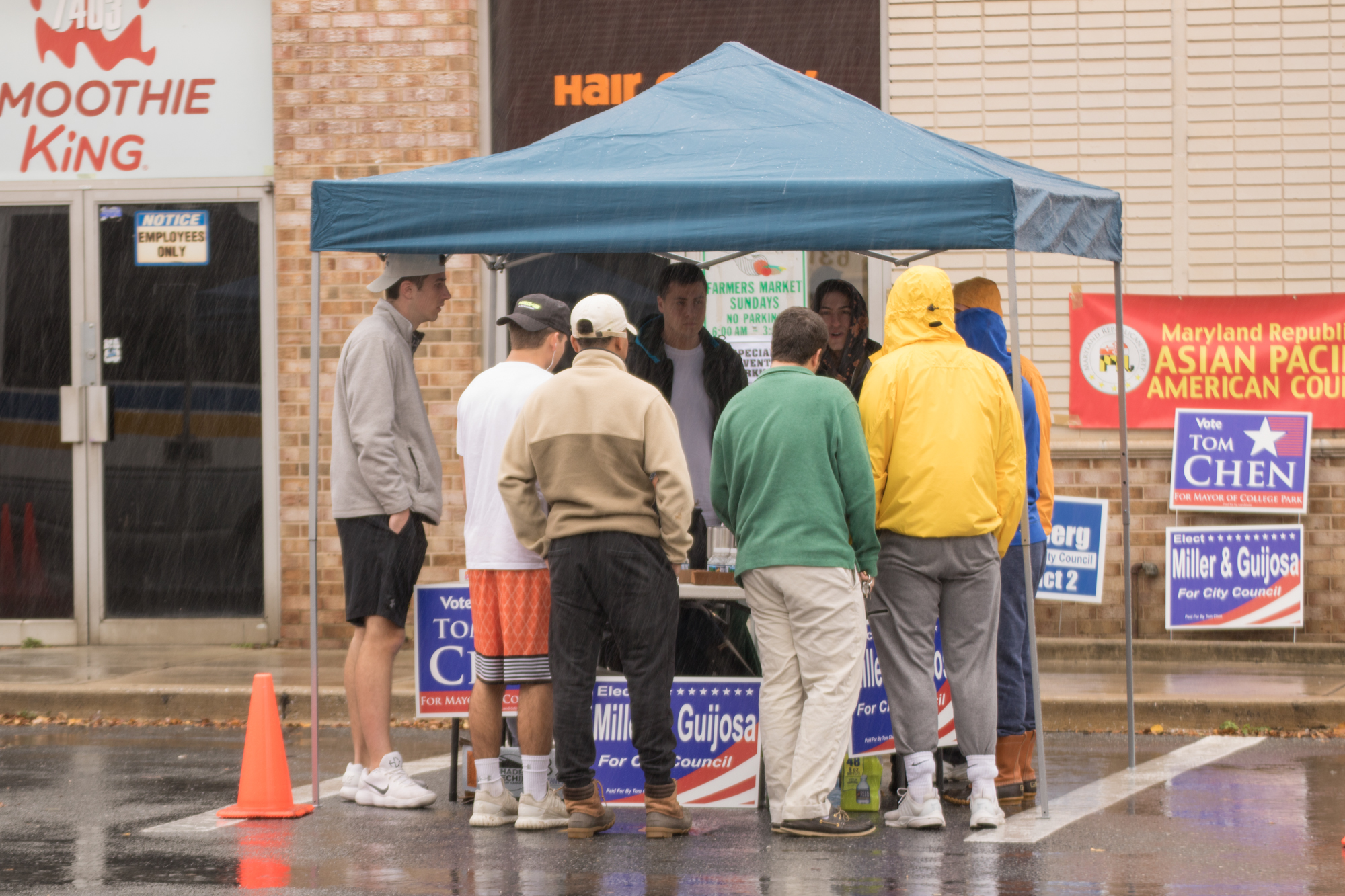 College Park’s 2017 elections took place Tuesday night, holding races for the city’s mayor and eight council members. Mayor Patrick Wojahn was re-elected to his second term in the most contested election of its kind in city history, and all of the council candidates who ran for re-election won in their districts.

Here’s a rundown of who was elected in each of the city’s four districts.

Kabir received the most votes of the four candidates, receiving 788 out of 1,855 votes, according to the city’s Board of Election Supervisors. Kennedy received 483 votes, while Beth DeBosky and Christopher Gill received 261 and 323 votes, respectively.

As a councilman, Kabir said he would like to quicken construction of the Hollywood Streetscape project, which aims to revitalize College Park’s Hollywood Commercial District. He also wants to bring more activities for youth and senior citizens, as well as to create a dog park.

“I am very grateful to the residents who voted for me and I’m very pleased with the outcome,” Kabir said, adding that he’s looking forward to working with Kennedy, who has helped him work on the Hollywood Community Garden. “We have a good partnership going forward serving the residents of District 1.”

“Feeling good,” Kennedy said. “I’m really looking forward to working with Fazlul [Kabir], excited about that. He’s an amazing public servant, I’ve worked with him in the past.”

Kennedy’s business background and experience with fundraising are two reasons why District 1 resident Theresa Renner voted for her.

The District 1 council race was the most expensive of the city’s four districts with a total of $7,380. Kennedy spent $2,744 — more than any of her opponents — but she received the least amount of money, according to campaign finance records. Kabir had $2,604 in contributions.

Christopher Gill, a District 1 candidate, said the loss was a “tough beat,” but he respects the winners.

“They’re both conscientious public servants who will do the best job that they can,” Gill said. “The voters have spoken and that’s the way it goes.”

“I get my life back, but I feel sorry for the city,” DeBosky said.

Brennan received 226 of 674 votes — including provisional and absentee ballots — according to the city’s Board of Election Supervisors. Dennis received 159 votes.

His platform has focused on community engagement, smart growth and quality of life issues.

“I’m really happy and really grateful to my neighbors who came out and voted today,” Brennan said. “It’s really humbling and I’m really excited to serve another two years.”

Brennan said he’d like to work on improving communication with residents, completing a new city hall and attracting quality development to the area.

It’s important to thank the other candidates who participated in the race, Brennan said.

“We had five people run in our district — people who demonstrated they really do care about the city — and their participation shows that democracy is strong,” Brennan said.

Dennis, who has served three terms on the council and has lived in College Park since 1995, has said he would continue making progress on issues that the city is already working on. He’s focused on enhancing the relationships between the council and its constituents, increasing the residents’ quality of life and addressing public safety issues.

Dennis said he thought he should be re-elected but was worried after the “turmoil over the last few months” stemming from issues surrounding a proposed charter amendment allowing non-U.S. citizens to vote in municipal elections.

“I’m relieved that it’s done and I get to continue and hopefully continue some of the longer-term projects that we have on the table,” Dennis said.

He plans to move forward with renovating City Hall and to continue improving relationships with stakeholders.

Blasberg said while he didn’t win, he sent his congratulations to Brennan and Dennis.

“I thought I ran an okay race — I don’t know what I could’ve done better,” Blasberg said.

Douglas acknowledged the winners “won fair and square,” adding that he “felt it was worth doing and [he’s] glad [he] did it.”

Despite his loss, Tobin said he’s proud of his campaign, volunteers, supporters and this university’s student voters.

Public leaders such as Wojahn, Brennan and Dennis “have a mandate for their agenda in bringing people together and bringing the university students into the fold and creating an inclusive city,” he added.

“We came out of this election as a better, more unified city than we were before,” Tobin said. “The overall message to take from these election results is that pro-community, pro-inclusion and pro-outreach to different communities won at the ballot box.”

“Everybody had great ideas and everybody was working toward the better of the city,” Day said. “We can’t let those resources go to waste … the candidates who didn’t win need to stay involved. … We can be using them as resources and picking their brains because they all brought their ideas to the table.”

Day, whose priorities include the Calvert Road child day care center and City Hall rebuilding, plans to “push to continue the strong communication between the students, the residents, the university,” according to an Aug. 30 Diamondback article. Day raised $462 for his campaign and had spent $196 as of Friday, according to campaign finance reports.

Resident Steven Levine said he voted for Day because “I’m supporting anyone who is against allowing noncitizens to vote.”

Rigg said he was honored and “humbled by the trust that the people in District 3 have given, and [he] really just want[s] to get to work accomplishing what it is that they want and what they need.”

“What they want and what they need is somebody to lead with integrity, to lead with transparency and to deliver results, and that’s what I aim to do,” Rigg said.

Rigg directs a policy office within the U.S. Department of Health and Human Services and has served on the Advisory Planning Commission for the past two years. He also served as president of the Calvert Hills Citizens Association for five years.

His campaign focused on continuing collaborations with this university, tackling quality of life issues and fostering a greater sense of community. All residents should be able to vote regardless of their immigration status, he said.

Rigg raised the most money by far of any District 3 candidate. As of Friday, he had $2,806 in contributions, according to campaign finance records.

Guijosa, a senior computer science and criminology major, and Miller, a senior family science major, ran alongside mayoral candidate Tom Chen. Guijosa said during a District 3 candidate forum last week that she believes non-U.S. citizens voting “dilutes the voices of those who are citizens.”

Miller, the social chairman and historian for Tau Epsilon Phi fraternity, said his top priority was improving public safety. He wanted to focus on increasing commerce by incorporating more green areas, particularly in Old Town, improving communication between students and residents, and working on traffic and pedestrian issues on Route 1.

While Miller said he is opposed to non-U.S. citizens voting in municipal elections, he said he would support forums where they could still voice opinions, along with streamlining the process to citizenship.

Miller had raised $120 for his campaign as of Friday. He did not respond to requests for comment.

“[I’m] excited, elated, humbled, grateful and ready to go,” Mitchell said. Kujawa said, “We worked hard, and we got out, and we did what we had to do.”

Mitchell, a former District 4 councilwoman and mayor pro-tem, has said her biggest focus is to maintain One College Park, a group of city stakeholders that focuses on diversity and inclusion efforts. Mitchell ran for mayor and lost in 2015.

Mitchell said she is most excited about “serving my constituents, and making sure that District 4 is a stakeholder at the table.”

Kujawa, a co-chairwoman of the College Park City-University Partnership’s Sustainability Committee, said if re-elected, she would focus on neighborhood safety measures and transportation. She’d like the city to expand its bike-share program, she said.

Mitchell spent $1,634 on her campaign, the most in District 4, according to pre-campaign finance reports filed as of Oct. 31. Kujawa spent $341.

Graduate student and city resident Rachel Ruisard said she picked Mitchell because of her background in education.

“Personally, being a feminist, I look to see women on board and as far up as you can go,” she said. “[Mitchell] has a lot of degrees in education and really pushes education, and that is really a focus of hers. I thought it complemented the other city council members.”

Alan Hew, a former District 4 councilman and alumnus of this university, took third place with 137 votes.

“There’s an advantage to living in The [College Park] Woods,” he said. “I’m surprised that it wasn’t closer than it was.”

Hew, whose platform focused on city development and transportation issues, has said he wants to cultivate fresh fruit and vegetable gardens in the city. As of Oct. 31, Hew had the highest total contributions to his campaign among District 4 candidates. He listed $835 in donations on his pre-election campaign finance report.

Gregory said he entered the race because he didn’t like the direction the city council was going in. He’d like council to focus more on College Park neighborhoods, and assist residents with infrastructure issues.