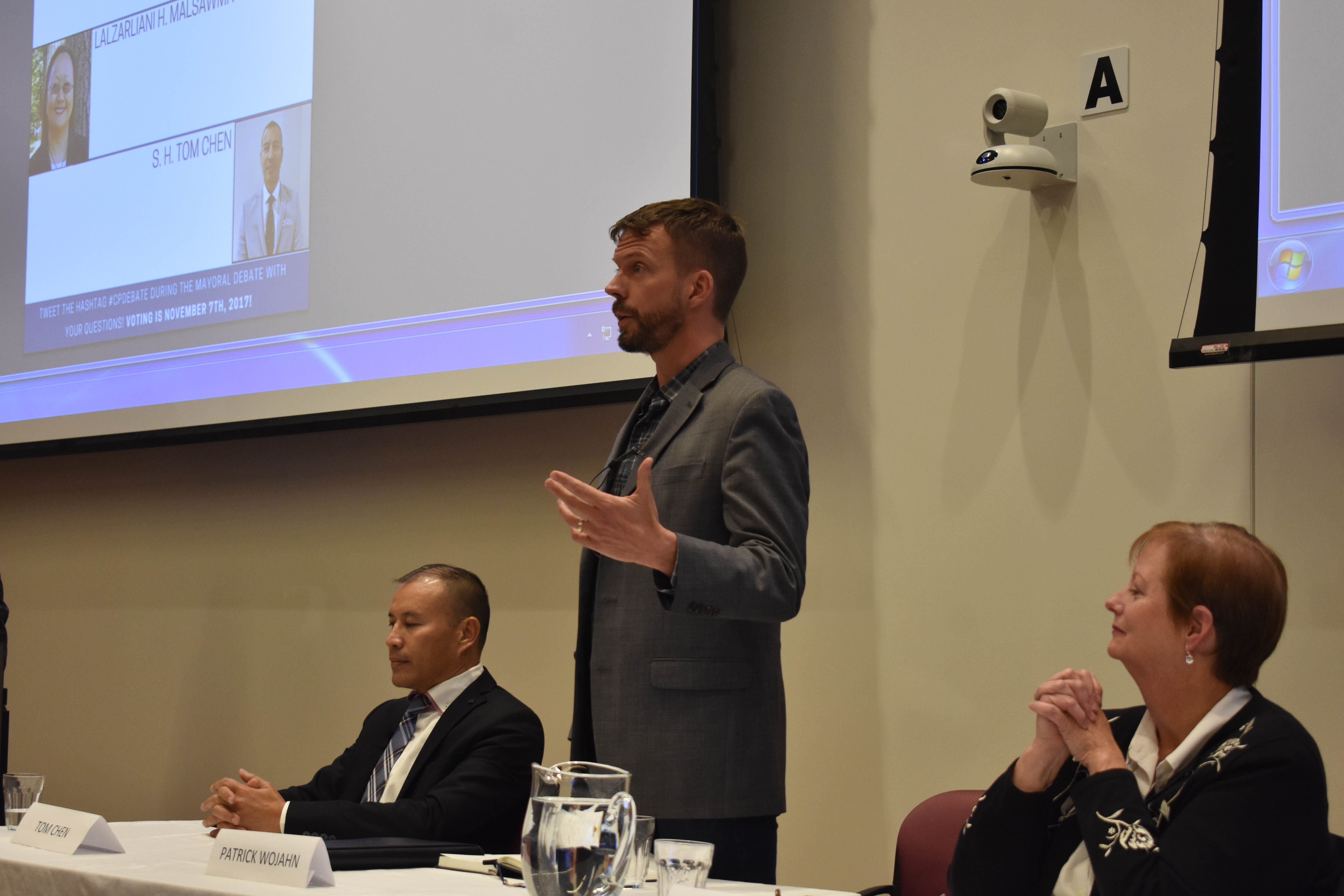 Current mayor of College Park, Patrick Wojahn, answers a question at the mayoral debate held in the Edward St.John Center on October 30, 2017. (Mateo Pacheco/For The Diamondback)

The event, held in the Edward St. John Learning and Teaching Center, was co-sponsored by the Residence Hall Association, the Graduate Student Government and the National Panhellenic Council.

During city council proceedings in September 2015, candidate Tom Chen once indicated he had up to 28 people living in one of his properties, after the city had legally limited the number to 16 residents, according to Veitch. Students shared concerns with the standard of living in some of his properties, he added.

Chen said when he purchased his properties everything was “up to grade” and “students’ concerns [are] my concerns.”

“If you go to any house in downtown, or maybe off downtown area, point one house for me, the house limit is five,” he said. “Everyone of them over five, six, seven — they’re all the same. It doesn’t matter who you are, they’re all in the same.”

Veitch asked candidate Zari Malsawma if her comments in a Sept. 25 Diamondback article constituted a blurring of the separation of church and state. She said her vision is for College Park to “become a city where God’s name is hallowed, his kingdom come and his will is done.”

“My understanding of separation of church and state is not so that people can be kept from practicing their faith in government, but that the government does not go around building churches, and paying people for performing religious duties in the performance of governmental jobs,” she said.

District 4 Councilwoman Mary Cook was questioned about the noncitizens voting initiative and its reversal, and was asked why she didn’t raise concerns about the voting threshold after it wasn’t met in September. She said she “honestly forgot.”

“We pay some people in our staff large amounts of money to make sure that things don’t happen, and unfortunately, they still did happen,” Cook said.

Current mayor and candidate Patrick Wojahn was asked about the noncitizens voting reversal, to which he “accept[s] [his] share of responsibility for what happened,” noting that the city is taking steps to make sure nothing like that happens again.

The candidates also shared differing opinions on absentee voting. The state of Maryland does not require an excuse for voters to submit absentee ballots, but to submit an absentee ballot in this city, citizens must have experienced an accident or illness that prevents them from getting to the polls, the death or serious illness of an immediate family member, or be confined to an institution, among other scenarios.

Students at this university attending classes during Election Day are not permitted to file an absentee ballot.

Chen said getting an absentee ballot should be easier, and Wojahn agreed, noting that the council has already been exploring this possibility, as well as the option of early voting.

Cook and Malsawma stressed the need for the council to carefully evaluate changes to voting laws. Malsawma said loosening absentee restrictions could open the door to voter fraud.

“I would like to explore that … before we say, ‘Yes, let’s make it easier to have absentee voting,'” Malsawma said. “Citizenship is a privilege, a right, and has responsibilities.”

She expressed her disappointment at the council’s efforts with the non-U.S. citizen voting proposal, which failed to pass in September due to a lack of votes, adding that she would like to see that “not come up again, ever.”

Veitch then asked their views on how to balance serving both students and long-term residents and the role of a city-university partnership.

Chen and Wojahn focused on the need for cooperation between the city and this university.

“We are a symbiosis. We benefit from the university as a city around it, and the university benefits from us,” Wojahn said. “We do rise and fall together. The more that we can do that, the better. … We ignore the university at our own peril.”

Malsawma said she didn’t see this type of relationship between the two entities.

“What I see is a lot of buildings going up, and I see that the university is benefiting a lot more than the city in this partnership so far,” she said. “What I would like to see is more students and residents coming together and working together under a vision.”

Cook said the city should partner with this university but remain autonomous. She noted student participation with city committees is “sadly lacking,” calling for more.

“It is very important for the university to remember that we are an autonomous body and that we have residents to answer to … all of you are our constituents in one way or another too,” she said.

In 2005, the city adopted a rent stabilization ordinance to protect residents from unwarranted rent increases, extended in 2009, 2012 and 2013. In 2014, the council allowed it to expire, Veitch said.

Malsawma said she wasn’t sure rent stabilization would help everyone, adding that there must be competition among landlords. Cook agreed with the need for greater competition and said she supported the ordinance’s expiration, though she wasn’t on the council at that time.

Wojahn was against the expiration as a District 1 councilman, but was not on the prevailing side of the vote. Rent stabilization is a tool to provide some affordable housing and ensure a balance between rentals and owner-occupied properties, he said, though it isn’t perfect.

Chen said in his 22 years living in the city he’s seen mayors, including the current mayor, talk about rent control, which he found “so ridiculous.”

“They want to do rent control for one purpose: kicking all the students out of the Old Town area,” Chen said, adding that “government needs to behave themselves.”

Chen said the city government sees students “like an ATM machine [giving] ticket after ticket [for] small, stupid” code violations, emphasizing the need to “focus on real crime” such as robbery, murder and assault. He continued to speak as the moderator informed him his time was up.

Wojahn rebutted, calling code enforcement a “tool for the students.” He added that when student housing is not maintained and develops issues, such as mold and rodents, “these are not victimless crimes.”