UMD shouldn’t force its employees to pay for parking 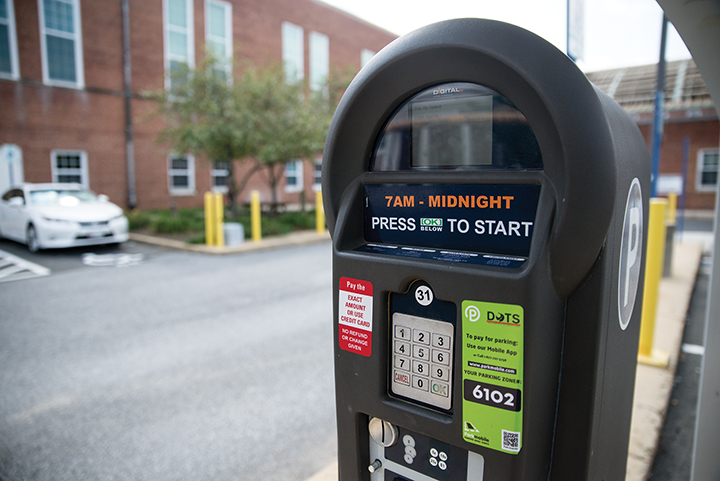 An electronic parking meter sits outside of the Stamp Student Union

This simple message was printed on stickers across campus last week. Union leaders distributed them as part of a campaign to change the University of Maryland’s parking policy for employees, who are required to buy permits. This policy is deeply unfair to workers, especially the economically vulnerable.

Employees earning less than $30,000 annually are required to pay $427 a year for the privilege to park at their job location. As yearly income increases, so does the parking cost; the upper limit is $853, for employees who make more than $80,000. Some workers may not come into contact with parking fees if they take public transportation, out of choice or necessity, but it creates an unfair penalty for those who need to drive to the campus.

For the workers in the lowest income category, $427 can be a significant burden. Depending on their household size, those making under $30,000 may be Medicaid eligible or even fall below the federal poverty line. For workers making the Maryland state minimum wage of $8.75 an hour, $427 works out to almost 50 hours worth of pay. More than a whole week of their salary goes back into the hands of their employer. It is unjust that the university would pay these minimum wage employees so little and then charge them to park on the campus.

The union representing this university’s employees is fighting to get rid of the parking fees completely. But so far the administration has not budged, and has even indicated it wants to remove the current cap on cost increases, which would allow parking fees to rise by more than 7 percent, The Diamondback reported. This university is trying to jack up costs at a time when it should be doing more for its workers.

Unfortunately, this exploitation is systemic. Last year, Prince George’s County’s minimum wage increased to $10.75 an hour. But even though this university is within the county limits, it is not legally bound by the law and can defer to the Maryland minimum wage of $8.75. The administration’s failure to pay all workers a living wage, combined with charging them hundreds of dollars a month in parking fees, demonstrates a serious misstep.

Negotiations between this university and the union are ongoing. In the meantime, we should put pressure on our school’s leaders to do right by their workers, especially those making the minimum wage.

This university cannot be allowed to ignore its employees and dismiss their union, especially as university President Wallace Loh’s salary recently increased by $75,000. Increasing pay for the highest earner instead of removing parking fees for some of the lowest earners is unacceptable. And I doubt he struggled to pay for a permit.

Jack Lewis is a senior government and politics major. He can be reached at jlewis20@umd.edu.