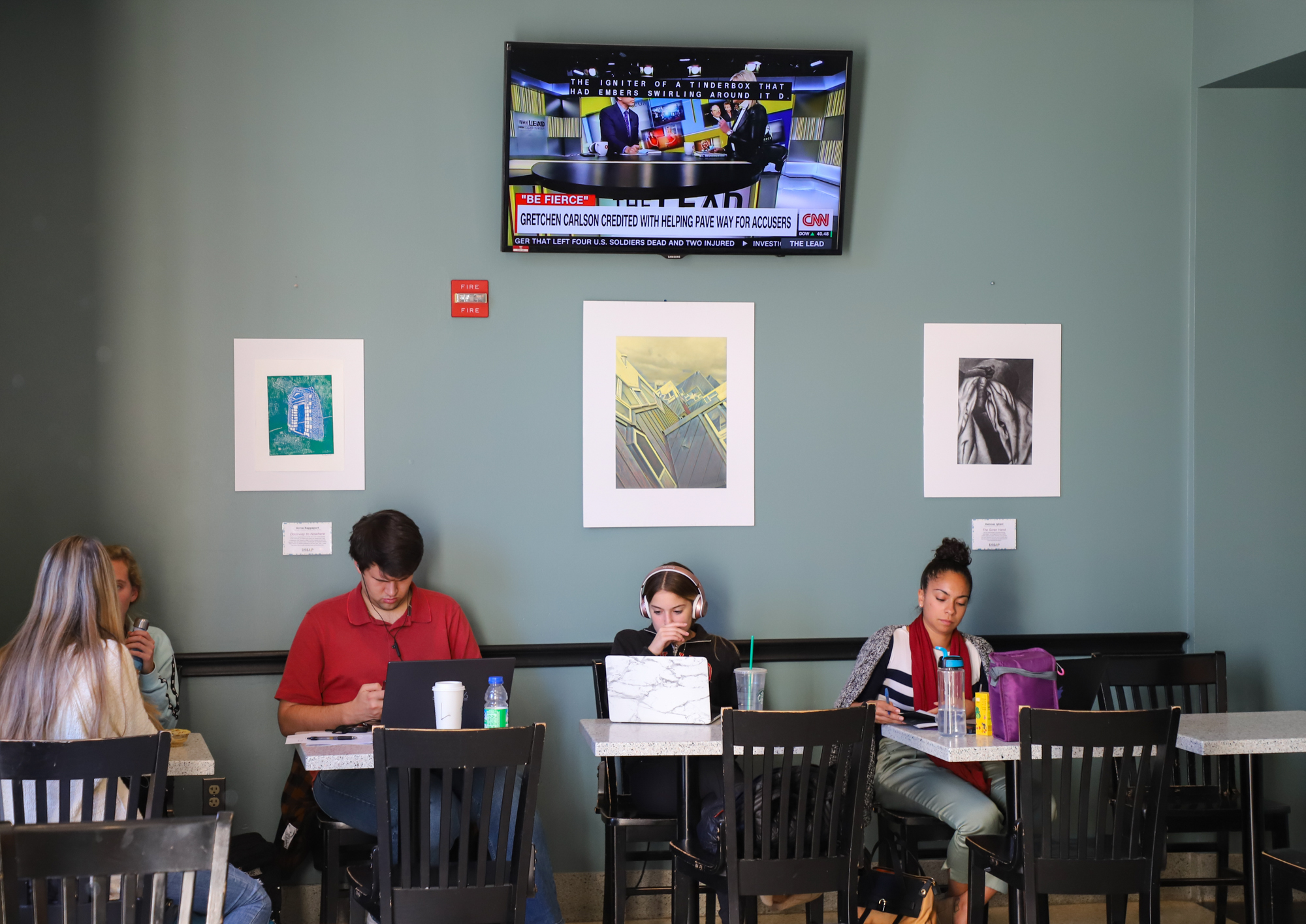 A Dining Services employee is leading an effort to display student art in restaurants and cafes around the University of Maryland campus.

Andre Christie, a manager at The Coffee Bar in Stamp Student Union, said his love of art and desire to decorate his workspace inspired him to start a monthly curated exhibit of student work in the cafe.

“I reached out to the university to see if they had any art or any students looking to get their art displayed, but I got a little pushback from that,” said Christie, who has some of his own art on display there. “So I decided to create my own process.”

Students who wish to participate can submit their works and a brief write-up about their pieces to a Google Doc, Christie said.

Christie chooses new pieces, which go on display in The Coffee Bar on the fifth of each month.

Each piece is mounted on the wall for three weeks, along with a small card listing the artist’s name and the ideas or inspirations behind the artwork, Christie said.

Christie reached out to other art-related campus organizations, such as the Art and Learning Center, to spread the word about his project and receive more submissions, he said. He estimates he receives about 12 submissions per go-round.

“It hasn’t been difficult,” Christie said of his efforts to find interested students. “I’ve filled every showing, but I’d like to get it bigger.”

Many students who have chosen to participate in the program are not pursuing a degree in art, said Jason Gembicki, Dining Services’ senior graphic designer.

“Every student has their own voice, whether or not they’re an artist or an art student,” Gembicki said. “So it’s cool to let them express themselves and then get to see their art displayed for everybody else to appreciate.”

The first art pieces went on display in August, Christie said, but now that the program has been fully established, he has hopes of expanding.

While the display is in The Coffee Bar only, Christie said he’d like to organize a student art exhibit in the South Campus Dining Hall.

“It’s influencing people and the word is getting out,” Christie said.

His art display has received attention from other campus organizations, such as the University Health Center, which has since started a similar program.

“I want to see it grow so big that it becomes an entity of its own, where art is displayed in almost all of the buildings on the university,” Christie said.

Junior Mehrnaz Ighani, whose work has been displayed once in The Coffee Bar, said she’s appreciative of Christie’s initiative to showcase student pieces.

“I feel like for amateur artists, it’s very hard to find places to display your art,” said Ighani, a public health sciences and studio art major.

Ighani has unsuccessfully attempted to exhibit her work in the Stamp Gallery, a platform she said is largely reserved for graduate art students.

Although art teachers often display student works in their classes, the pieces are frequently too close together to each receive the attention they deserve, she said, adding that this problem doesn’t exist in The Coffee Bar display.

“When you have your artwork displayed at a coffee bar, people will look at it,” Ighani said. “They will dive into it and appreciate the true beauty and the truth behind the aesthetic.”

Christie said his favorite thing about art is the “satisfaction in creating something beautiful,” and he believes it’s important to give students an opportunity to experience that.

“It puts on display the talents of our student body,” he said. “My favorite thing is just to see everyone’s art, and how they express themselves through it.”