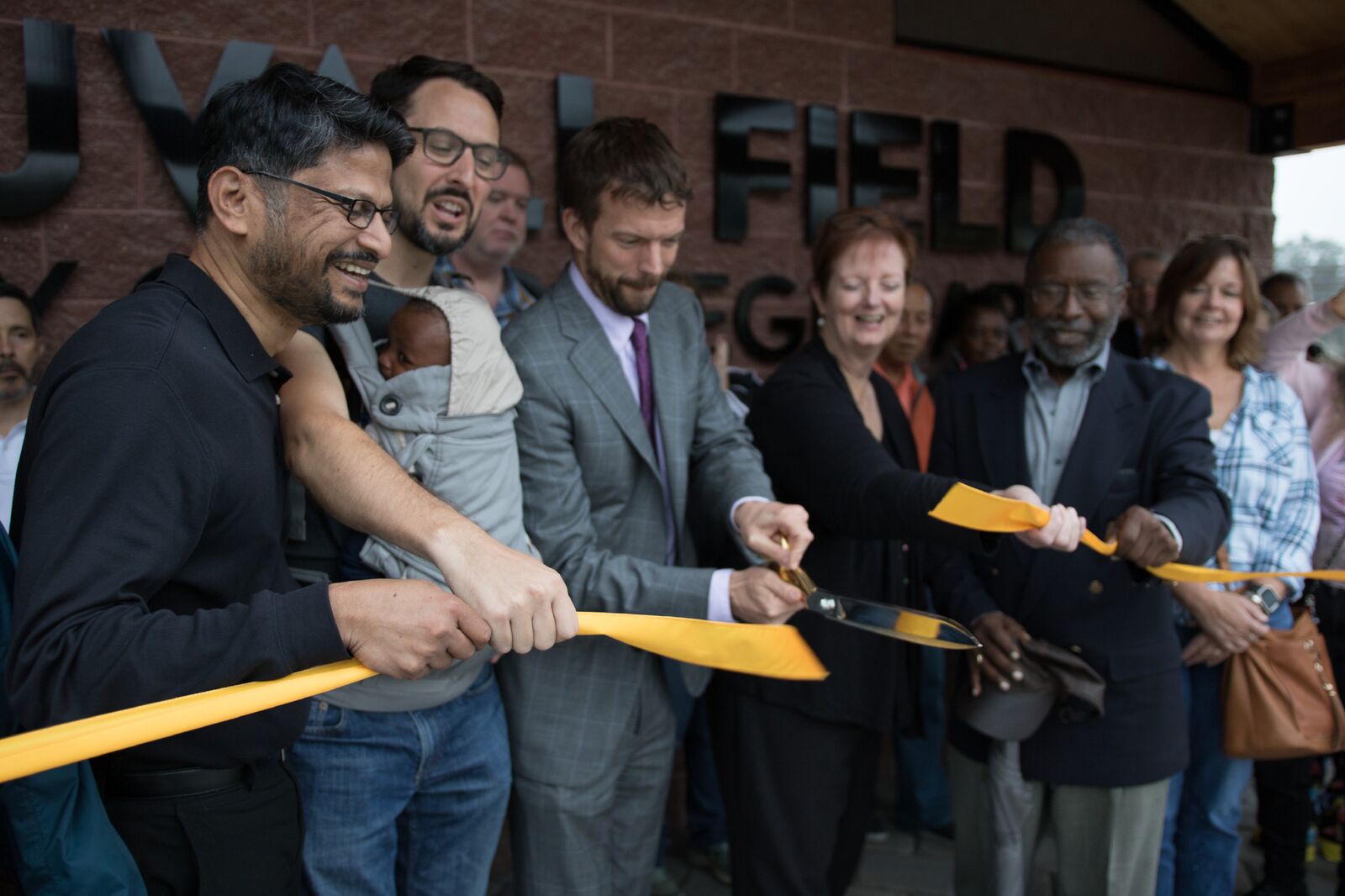 Beneath cloudy skies and amid a light rain, College Park officials and residents debuted a new concession stand and plaza at Duvall Field, the largest city-owned recreational facility, on Friday evening.

“This used to be a jumping place,” District 1 resident Dave Turley said.

Turley said he thought the new concession stand and plaza are a step in the right direction, and he’d like to see more family-oriented events like concerts and movie nights held at Duvall Field.

“I think it’s great,” District 1 resident Ryan Moore said. “The concession stand has been an eyesore for a long time.”

The old concession stand was “past its prime,” “dilapidated” and “not serving the needs of the community,” city planning director Terry Schum said, as it was made of wood and had to be repainted often, and the bathrooms were not handicap accessible. The new concession stand was “built from scratch” after the old one was demolished over a year ago, she said.

The concession stand used to be and will continue to be used primarily by the College Park Boys and Girls Club, Schum said. There was storage space and a bathroom in the building that was used when there was a tournament or game at the field, she said.

Renovating the concession stand and plaza cost $1.3 million, Schum said. This was too expensive for the city in 2007, when it was first considered, she added, so the majority of the funds for the project were obtained from the state. Every year, the city got some money from the state’s Program Open Space, and after enough years, they had enough funds to pay for the project without using too much taxpayer money.

“We were able to accumulate, over the years, enough Program Open Space and match money and bond bill money to finally do the project,” Schum said.

The city had been planning to renovate Duvall Field for more than a decade, Wojahn said. He thanked David Milligan, who took the College Park Boys and Girls Club to Annapolis to request funding for the project in 2007, when Milligan was a city council member and the club’s president.

Wojahn said the new concession stand was built with sustainability and accessibility in mind and would help bring the community together, through rain gardens and permeable floor surfaces to prevent runoff. The space was also designed to be more handicap-accessible, and he said the opening of the new concession stand and plaza is only the first phase of Duvall Field’s renovations, with improvements to the sports fields to come in the near future.

“We already have seen a change in demographic and uses of the field from more traditional baseball and football and those types of things to things like lacrosse and soccer,” city manager Scott Somers said.

Schum said parts of the fields could be repurposed into an exercise facility or dog park if it went unused as an athletic field.

“We’re going to work on getting these fields renovated,” Wojahn said, “and making it so that our kids no longer have to play in the mud and water in the years to come.”