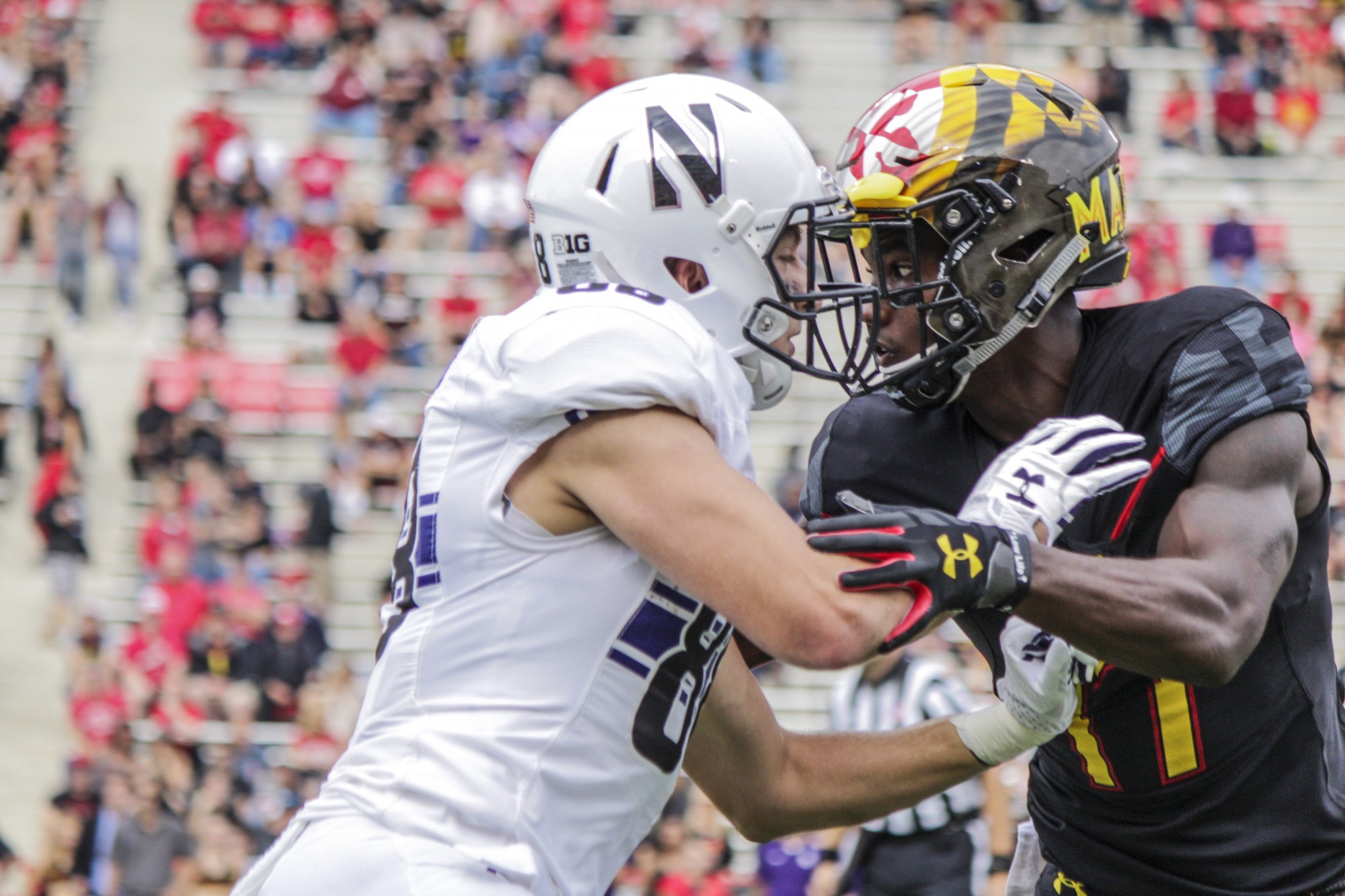 Maryland football fans cheered in the second quarter Saturday as Northwestern cruised down the field for its third touchdown of the first half.

They weren’t applauding another Wildcats march toward the end zone, but rather a loose game ball in the stands that was being tossed around the student section. It was a rare moment of levity during a 37-21 loss that dealt a blow to the Terps’ bowl game hopes. Maryland needs to win three of its next six games, four of which are against ranked teams, to be eligible for the postseason.

Maryland’s defense allowed more than 400 yards for the third time in four contests, overshadowing a career game from wide receiver DJ Moore, who caught 12 passes for 210 yards and two touchdowns.

“It feels good,” Moore said of his performance, “but winning would be better.”

[Read more: Maryland fans tossed footballs around the stands after Northwestern’s kicker hit them over the net]

Northwestern took advantage of crossing patterns from its receivers to convert 10 of 21 third downs, which coach DJ Durkin attributed to a weak performance from his front seven. The Terps have just one sack in their past four contests.

They’ve also struggled to contain mobile quarterbacks, as Clayton Thorson became the third signal-caller to surpass 40 rushing yards against them this season.

“At the end of the day, we have to get some sort of pass rush,” Durkin said. “All those routes take a long time to develop, so when the quarterback has five seconds to stand back there, he’ll find someone.”

Quarterback Max Bortenschlager started for the Terps (3-3, 1-2 Big Ten) despite suffering an apparent head injury last weekend at Ohio State. Though he found mixed results in the pocket, completing fewer than half of his passes, he leaned on Moore to move the ball downfield against the Wildcats (3-3, 1-2).

Moore hauled in his 100th-career reception on Maryland’s second possession of the game, snagging a throw over the middle for a 21 yards. Later in the drive, he caught a 12-yard score, passing former wide receiver Stefon Diggs for fourth all-time on the program’s touchdown catch leaderboard.

In the second quarter, Moore outmuscled three defenders near midfield and sprinted down the left sideline before evading another Wildcat to cap a 52-yard touchdown.

“DJ is a hell of a receiver,” center Brendan Moore said. “He played his butt off today.”

Moore’s second score gave the Terps a 14-10 lead with about eight minutes remaining in the half. But the defense surrendered two touchdowns before intermission, putting Maryland behind, 24-14, at the break.

With the Terps trailing by nine early in the fourth quarter, Bortenschlager found Moore for completions of 18 and 11 yards to enter Wildcats territory. However, on fourth-and-8, the Philadelphia native dropped a pass that would have been a first down.

Maryland’s frustration boiled over on its next drive, when wide receiver Taivon Jacobs thought a defender interfered with him as he went up for a long third-down toss. The officials denied his appeals for a flag, and Bortenschlager threw an incompletion on the ensuing play for a second straight turnover on downs.

Durkin, who argued with officials throughout the game, said he would speak with the Big Ten about calls like the non-pass interference.

Northwestern running back Justin Jackson clinched the game with a 21-yard touchdown run up the middle, giving him 171 rushing yards on the day. The Wildcats finished with 238 yards on the ground.

Maryland heads to Madison next weekend to face No. 7 Wisconsin in a tilt that could hand the Terps their fourth loss in five games. With that matchup looming, and the sting of a double-digit defeat to Northwestern still fresh, there was a familiar mood in the locker room.

“Everybody was down,” linebacker Jermaine Carter said. “We practiced hard all week, we focused, but we just didn’t come out on the right side of things.”