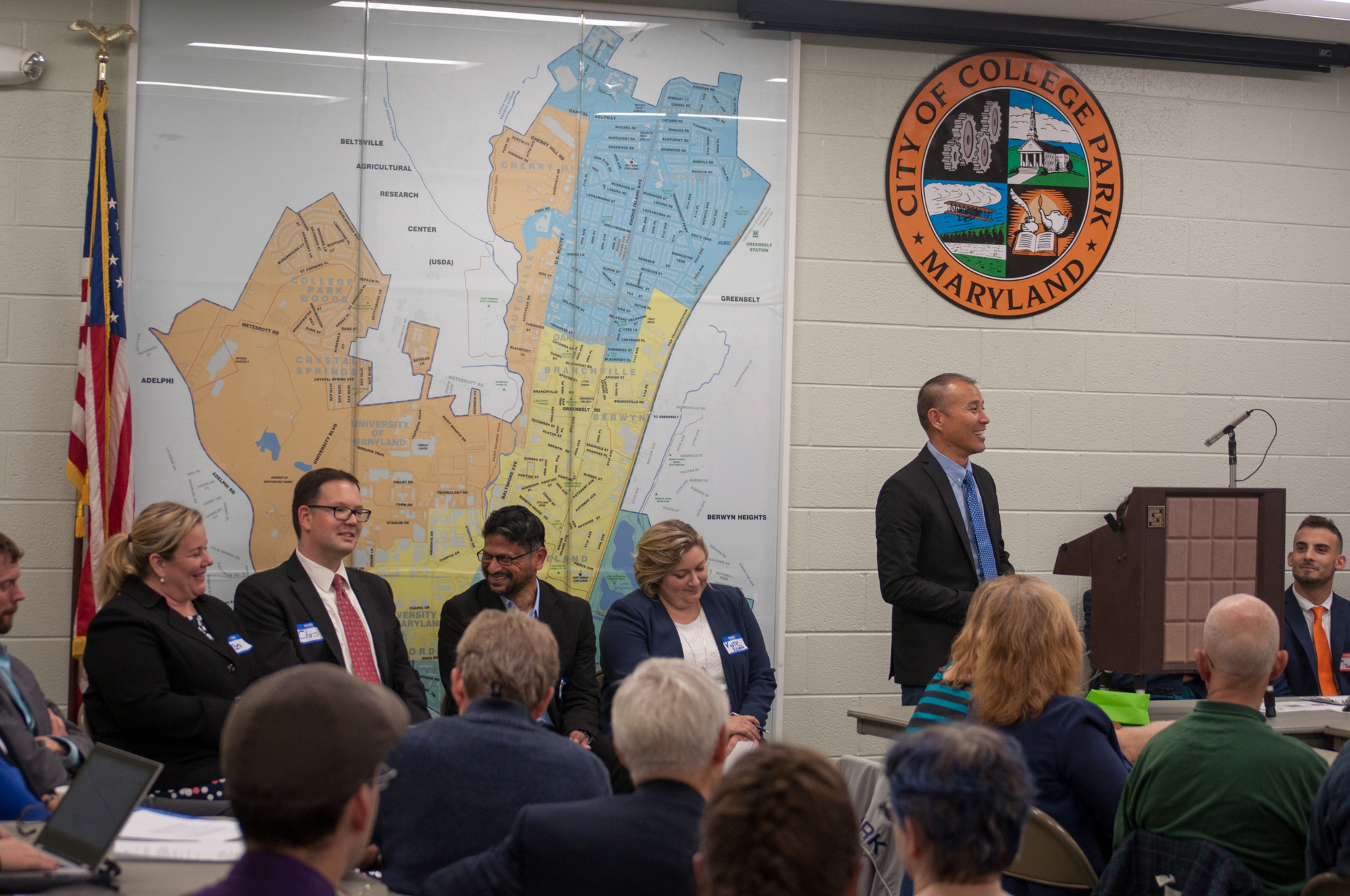 The forum included mayoral candidates and council candidates for Districts 1, 2 and 4. District 3 is not part of North College Park, so it was not included.

At the standing-room-only meeting, the four mayoral candidates — Mayor Patrick Wojahn, District 4 Councilwoman Mary Cook and city residents Zari Malsawma and Tom Chen — began by explaining what made them best suited for mayor.

Wojahn cited his experience in the role and as a council member for eight years.

“The reason why I ran for council in 2007 and ran for mayor is 2015, is because I saw a lot of untapped potential,” Wojahn said. “To get beyond just the fast food restaurants and the bars and bring in … high-quality development that respects our neighborhoods and takes advantage of our existing infrastructure.”

Cook shared how she came to the Cherry Hill neighborhood in College Park and cited her city involvement.

“The bottom line here is it’s all about you. It’s not about me,” Cook said. “What I want is to get back to basics.”

Malsawma said she would bring something different to the role of mayor.

“My vision for the city is for it to become a city like none that’s ever been, a city where no evil can thrive,” Malsawma said, adding she’d like to pursue a strong identity for the city.

She said Wojahn has a vision, but she’s not sure she shares it.

“I would like us to be a city with a strong sense of identity that is not dependent on our relationship with the university,” Malsawma said, adding she’d like College Park to take advantage of its diversity and be a model for other cities.

Chen shared his experience coming to the United States at 16, working in a restaurant and helping his family, later moving to College Park and becoming a restaurant owner.

“I’m learning from the community and students. I learn a lot of stuff from them,” he said. “I think we see a lot of divide between the city of College Park and the university.”

Malsawma focused on restoring the residents’ faith in the council after the noncitizens voting initiative. The council had to revoke the measure’s passage since it had insufficient votes. She also called for a new City Hall.

Cook highlighted revisiting the city’s Strategic Plan to include a more comprehensive view of city infrastructure, rather than focusing on individual city projects, as well as green spaces and evaluating city policing.

“The first time I was elected, it wasn’t easy,” Kabir said. “Now, I’m very comfortable. … I know immediately who to contact. That took me a while to learn.”

Kabir said the council should be focusing on serving people from all ages — from young people to senior citizens.

Candidate Chris Gill said he’s voted in the city for seven years, and shared his connection to the community — College Park is where he bought his first home, dated and married his wife and is now raising his children.

In the short term, Gill said the city website could be more accessible so that reaching out to council members doesn’t have to be the first way residents try to resolve problems. In the long term, he said, the city needs to figure out its goals.

“If we don’t have a plan for what [the city] wants, [the state and county aren’t] going to do it,” Gill said.

“I’d love to convince other funders to invest in our community,” said Kennedy, the chief development officer for the League of Women Voters.

Candidate Beth DeBosky said her best qualification is that she loves people, and she’s interested in what residents want.

“This is a public service position,” DeBosky said. “My job is to serve you. … I have a fiduciary duty to serve you all, not me.”

Brennan said this is his “forever home” and emphasized how he has helped expand the city’s ability to communicate with residents.

“I’m interested in having good relationships with our county and state officials to [get] good schools in College Park,” Brennan said.

Douglas said he’d like to see the intersection at Route 1 and Paint Branch Parkway fixed, calling it a “death trap.” He’d also like District 2 residents to be hired for city development projects.

“My greatest qualification is I’m not on the council,” he said. “I’m a new perspective.”

Tobin, a District 2 resident, said his involvement in this university’s Student Government Association safety walk and his role on the Neighborhood Quality of Life Committee shows his care for city issues.

“A student’s best asset is you,” Tobin said. “To see a vibrant community around them.”

Douglas said he’d like to see a more responsive council — one that is not “wishy-washy” — along with safer streets and more city development jobs for residents. He said the city government is “completely out of touch with its people,” adding he feels the U.S. government has the same problem.

“Poking a stick in Christopher Columbus’ eye isn’t my priority. Alien voting isn’t my priority,” Douglas said. “We need to get back to basics [and] keep our eyes on the ball. … We’ve got to change the council … otherwise this isn’t going to change.”

Councilwoman Dustyn Kujawa spoke about her accessibility to the residents, after which candidate Alan Hew said he quickly got involved with city issues after moving to College Park, participating in initiatives such as updating the sector plan for the Route 1 corridor.

Candidate Denise Mitchell, a 42-year College Park Woods resident and former councilwoman, said her former terms on council were ones served with integrity and transparency. Candidate Oscar Gregory questioned the state of city development in the city, and said he’d like to see a redirected focus to the neighborhoods.

Gregory focused on traffic issues, particularly with the number of cars on the Beltway and Route 1 traffic. He also said he’d like to see city officials work from home instead of investing in a new City Hall, so that the funds for that project could be used on fixing city infrastructure and youth programs.

“I’ve worked corporate for 35 years. … Bring the money back,” Gregory said. “I’m not a politician, I’m a representative.”

Mitchell said she’d like council members to be accountable and transparent, and made references to the citizens nonvoting initiative.

“Being a council member is about accountability and transparency,” Mitchell said. “[It] means providing town halls to the community and telling them what’s going on in the city.”