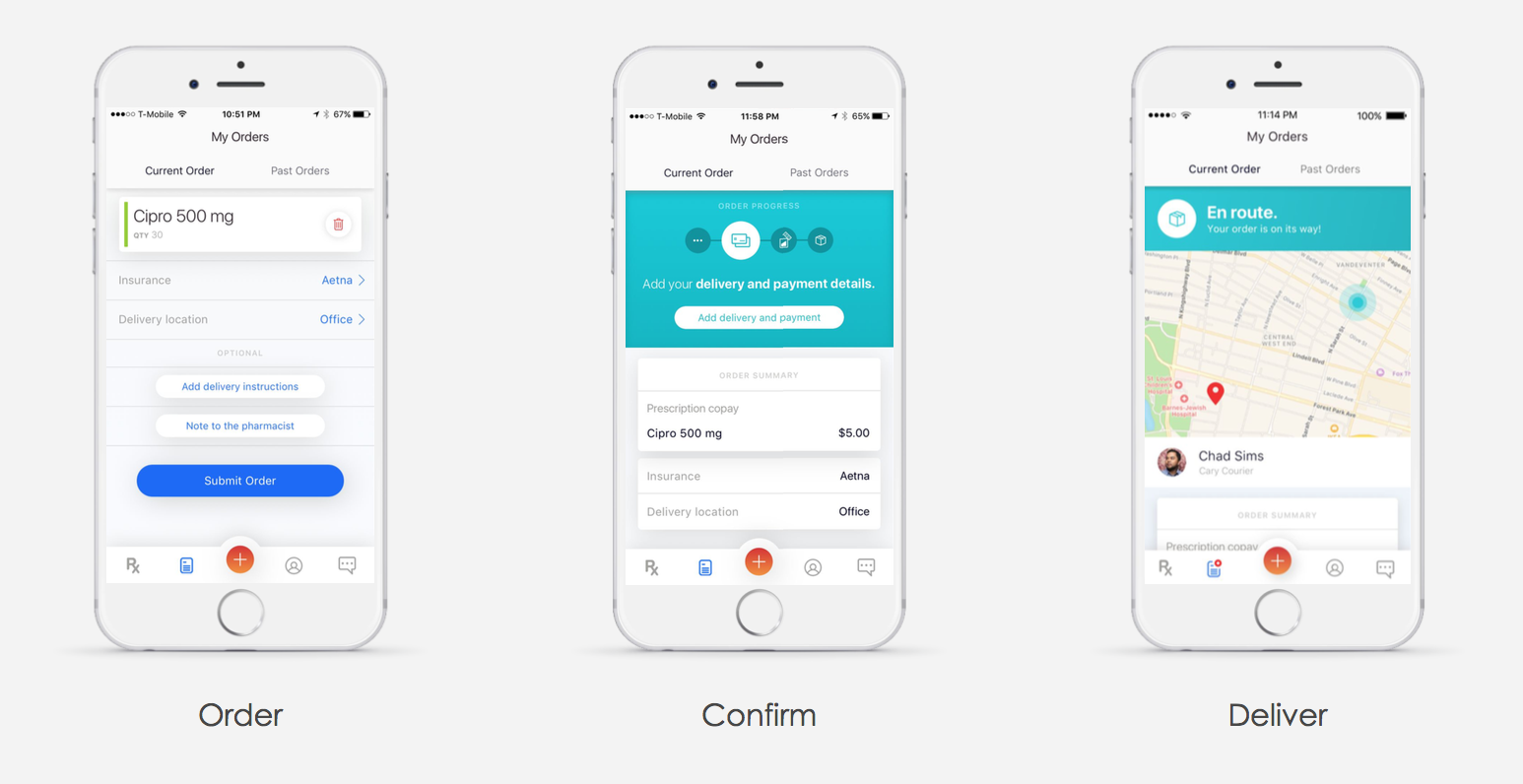 The app, called CaryRx, includes sections for an individual to chat with a pharmacist and track orders, among other features.

Patients can upload paper prescriptions by taking a photo and transfer existing prescriptions from another pharmacy through the app. Areo Nazari, one of CaryRx’s founders, said transferring someone’s prescriptions to the app takes “20 seconds at most, with just a few taps of your finger.”

An individual’s doctor can send prescriptions to the app as well. CaryRx accepts insurance plans from most major carriers, and patients will have the same co-pays for their prescriptions, according to its website.

The company has one pharmacy located in Washington, D.C., and delivers same-day to that area, but some Marylanders can enjoy free two-day shipping for scheduled deliveries, Nazari said.

There is also an express delivery option for the two-mile radius in D.C. where the pharmacy is located, allowing the user to receive medicine within 30 minutes of placing the order. Nazari hopes to start expanding pharmacies — and the same-day radius — to northern Virginia and Maryland suburbs in late 2018.

Nazari said he was the manager for a Target pharmacy when he came up with the idea for the venture, which is currently the only one in D.C., after noticing how outdated the shipping policy was.

“People had to call in and give their insurance cards over the phone, plus delivery took two days and was only offered a few days a week — it didn’t help people who actually needed medicine,” said Nazari, who graduated from this university in 2006 after majoring in biolog. “Everyone is used to ordering food and home products on demand and your pharmacy experience should be the same.”

CaryRx launched on the Apple Store over the summer and will launch on Android platforms next month.

The company promises 100 percent discreet service. No one sees a prescription except the patient and pharmacy team, Nazari said. The packages are then sealed into a box with tamper evident tape.

Co-founder Kevin Lance, an alumnus from this university, said he wanted to create the app to help college students.

“A few years ago in college I was sick in bed and did what any student would do and went to CVS on Route 1, waited in line, didn’t feel well the entire time, and by the time all was said and done two hours were gone out of my day when I should have been resting,” Lance said. “I don’t want another student to go through that.”

Senior Rachel Rabinowitz said she currently goes to the pharmacy when she needs medicine, but she might use CaryRx in the future.

“When you are sick you don’t want to have to go out and get medicine,” the criminology and criminal justice major said. “Especially being a student, medicine is not always readily available because you might have to drive to get it, so this service is really convenient.”

So far the number of users of the app is in the hundreds, mostly for repeat subscriptions, Nazari said.

Another alumnus Nima Negahban, who graduated from this university with a computer science degree in 2006, is an investor with the startup.

“I think we have a huge benefit coming from different backgrounds from University of Maryland,” Nazari said. “It is really great of the university to breed a culture of entrepreneurship and give us the tools to launch a business like this and I am happy to be located near this area.”

CORRECTION: Due to an editing error, a previous version of this story misspelled Nazari’s name. This story has been updated.