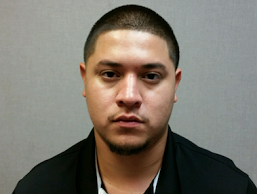 Police identified a victim and charged a suspect with murder in a fatal shooting at a College Park apartment complex early Sunday.

Officers responded to the Seven Springs Apartments complex on Sunday at about 5:25 a.m. for a double shooting and found 24-year-old Rogelio Sierra-Duran of Silver Spring and another man inside a building, Prince George’s County Police said in a news release. Sierra-Duran was pronounced dead at the hospital.

The second victim was still in the hospital as of Sunday night, county police spokesman Cpl. Harry Bond said. His injuries are preliminarily not considered life-threatening, the release said.

Police identified 21-year-old Davie Serpas of College Park as a suspect, according to the release. Serpas was taken into custody in Washington early Monday and was charged with first- and second-degree murder. He is in custody awaiting extradition to Prince George’s County.

An initial investigation shows Serpas and the victims argued while at a party at the apartment, which escalated into the shootings, the release said.

Police are investigating the homicide.

CORRECTION: Due to a reporting error, a previous version of this story incorrectly said two victims had been identified. The man who died was identified; the man who suffered injuries was not. This story has been updated.