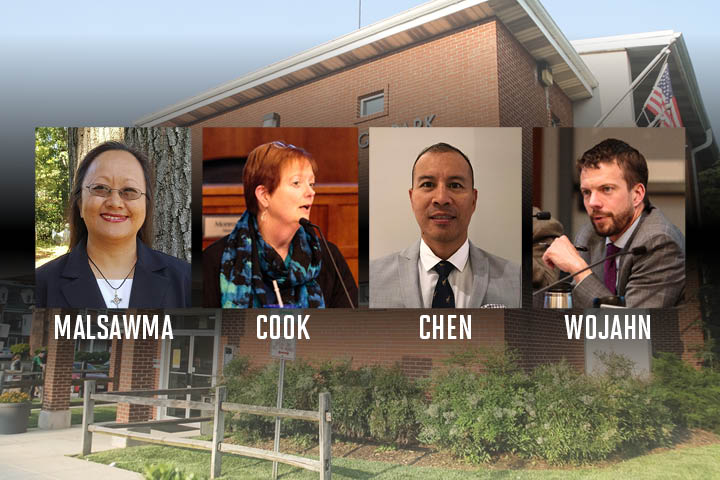 Three new candidates have entered the College Park mayoral race, challenging incumbent Patrick Wojahn in what is now the most contested mayoral contest in city history.

District 4 Councilwoman Mary Cook, District 4 resident Zari Malsawma and District 3 resident Tom Chen join Wojahn in the pursuit for the mayoral seat, which will be decided on Nov. 7. They all filed in the past week.

Since the city became incorporated and held its first election in 1945, as many as three College Park residents have crowded the ballot for mayor — but never four, according to the city’s website.

“It shows that there’s a lot of interest in what’s happening now in the city,” Wojahn said. “I remember in the last election talking about how competitive the race was, and I think it’s a continuation of the same thing. … I’m looking forward to this discussion and this debate about the future of our city. I think it will be a good dialogue.”

Before he ran for his first term as mayor, Wojahn served four terms on the city council as a District 1 councilman. He founded College Park Day in 2010 and established the Neighborhood Stabilization and Quality of Life Workgroup, now known as the Neighborhood Quality of Life Committee, which addresses tensions between students and city residents. He said he plans to focus on issues such as transportation, sustainability and development in downtown College Park during his campaign.

Cook previously said she wasn’t planning to run for councilwoman or mayor but decided to run for re-election to her District 4 seat after seeing that “a strong voice for the residents” is needed on the council. While collecting signatures to petition for candidacy, residents questioned why she wasn’t running for mayor, she said.

“There was just so much support, and I said, ‘Well, if I can actually see that I’ve got that support behind me, then I’ll go ahead and run,'” said Cook, who has served nearly five years total on the council. “Obviously, we need a strong voice in College Park. Many people are not happy with the way things are going in the city right now, on so many different levels, and so I made the decision to run.”

Cook has been involved in seven committees — including the Committee for a Better Environment and Veterans Memorial Improvement Committee — and has held a leadership role in six of them, she said. In her time on the council, she “initiated the Strategic Plan as a tool for future construction and budget development,” established the first and only “Go Carless Day” and supported residents’ use of Shuttle-UM, according to the city’s website.

Cook said she’d like to see council members and city staff go “back to basics” and “refocus our attention on the needs of the residents.”

“Although College Park takes care of its residents, to an extent, I think there’s so much need by some of our individuals in the community and we’re missing it,” Cook said. “For example, [the council approved] an Aging in Place committee, and we’ve hired new people to work in the [Youth, Family and Senior Services], which is good, but we’re still missing these people.”

Council members and the city are “not in good contact with our immigrant populations,” Cook said, adding that she doesn’t think it’s because they don’t want to be.

“I don’t think that we have made the attempts to reach out to some populations,” Cook said. “It’s very easy to print something in Spanish and hand it out, or we have Spanish-speaking staff, but we also have people from I don’t know how many different countries, and we’re not reaching out to them. … We just have to figure out how to do it the best way possible.”

In College Park, 25.9 percent of citizens are speakers of a non-English language, which is higher than the national average of 21 percent, according to Data USA. The most common languages spoken in the city in 2015 aside from English were Spanish, with 7.9 percent of the overall population being native speakers; Chinese, with 4.6 percent; and Korean, with 1.8 percent, also according to Data USA.

Malsawma, who tried to run for mayor in 2015 but didn’t reach the signature threshold to be on the ballot, said she’s running for mayor this year because it is something that “God has led [her] out on.”

“The vision he’s given me is to help make College Park into a place where no evil can thrive,” Malsawma said. “To see it become a city where God’s name is hallowed, his kingdom come and his will is done. A city like none that’s ever been, and that’s my motto. I can’t explain it any other way, that’s my passion.”

Malsawma was a co-coordinator for the College Park Woods Neighborhood Watch — a grassroots program organized by concerned residents interested in reducing crime in their communities — from 2006 to the spring of 2011, and has served as a block captain ever since. She’s also been a member of the civic association since the mid-1990s, and is a lead for Nextdoor’s neighborhood network, she said, which is a private social network for neighbors and their community.

Malsawma said she’d like to work on creating a stronger sense of identity as a city.

“So far, the council and the mayor are capitulating to the wishes of the [University of Maryland] and not really finding out what the residents want,” Malsawma said, citing the Calvert Road child care center project.

“That is just so not beneficial to the rest of the residents unless you work for the university,” Malsawma said. “[I would like] for us to form a really strong sense of identity so that when projects and proposals come up from the University of Maryland, we can say, ‘Well, this is who we are, and that doesn’t really fit in with what we want to be, or do, as a city.’ So I’d like to develop that sense of very strong identity with regards to what College Park is going to be all about.”

Chen, a District 3 resident who has lived in College Park for about 22 years, wants to bridge the gap between city residents and students at this university and ensure that everyone has a voice in the city, said Samit Sheth, one of his campaign managers.

Since moving to College Park, Chen has been a restaurant owner and landlord for students, which has given him relevant “experience in balancing preservation” of the city’s resident and student interests, Sheth wrote in a message. He’d like to keep students out of trouble and keep the community safe for residents, Sheth added.

“It’s going to be an exciting six-and-a-half weeks,” Wojahn said. “I look forward to hearing from the voters.”