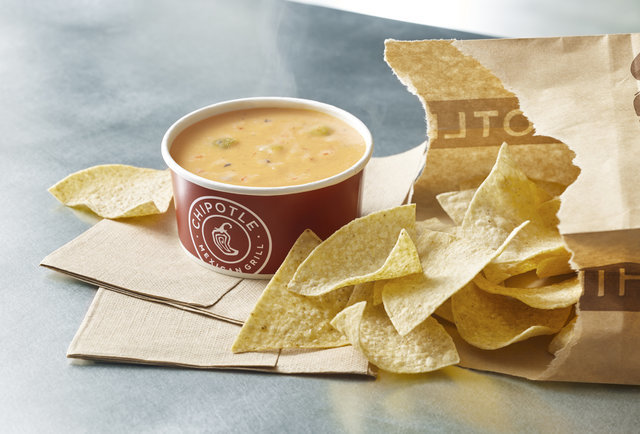 Chipotle’s new queso is easily the year’s most controversial food. So we had two writers break down the cheesy new creation.

Amid a stressful week of school, I got a text message last Wednesday that would forever change life as I knew it.

“Our all-real, all-delicious queso has arrived. Dreams do come true,” the automated text from Chipotle read. (Yes, I get automatic texts from Chipotle. Please do your best not to judge.)

Certainly, I’m not the only one with a steadfast love for this fast food establishment. Anyone with taste buds can confirm that Chipotle is heaven — if entry to heaven costs $7 before the guac.

But even the greatest things in life have the potential to rise even higher: Looney Tunes was great as it was, but couple it with Michael Jordan and you get Space Jam. Pretty much any dessert is instantly ten times better with Nutella.

For Chipotle, the ticket to superstardom is great queso.

So, of course, I had to make the pilgrimage that same night. Accompanied by my friend Allison, I set off on a journey that would challenge my unwavering support of Chipotle.

There was a minor setback: The College Park location was out of chips. (I guess a couple other people were on the same venture we were.) Not to worry, a quick stop at the Commons Shop produced a bag of tortilla chips. Nothing was going to stand in the way of me and this tub of melted cheese.

Allison and I reached my apartment, and the moment for my very first bite of the ringer known as Chipotle queso had arrived.

Dear reader, I’ll remember that bite for years to come.

My teeth sunk into that Tostitos Restaurant Style chip coated in yellowish goop and I was reminded of everything that is terrible in the world. It was that bad. Grainy, slightly spicy but mostly watery, it tasted like beans and disappointment.

Crying Jordans flooded my mind. A month of Sundays hit the calendar. I almost called my mom because I just needed to hear a comforting voice.

This is the Chipotle queso that 2017 deserves.

It was like Donald Trump’s inauguration day. It was like La La Land creators stepping onto the stage to accept their Oscar, only to be informed that Moonlight actually won. It was like the Falcons leading 28-3 in the third quarter of the Super Bowl, only for the Patriots to come back for a 34-28 victory. It was like Ted Cruz’s Twitter.

My flicker of hope — that one day, Chipotle would have queso and everything in the world would be OK again — burned out forever last Wednesday night. A little part of me died. In my 20 years, I have never experienced such disappointment. If this is adulthood, I want no part of it.

I want so badly to be able to give Chipotle the benefit of the doubt here. But did they put, like, any effort into trying to make this good?

The road to hell, it turns out, is paved with subpar queso.

But in the wise words of my friend Allison, “It tastes so bad. I’m still gonna eat it though.”

Let’s just say you score a date with who you believe to be the most attractive girl on this campus. You have a decent conversation over dinner and have similar career aspirations, but by the end of the night, you realize a long-term relationship isn’t realistic.

Do you regret going on the date? Probably not, and rightfully so. You just don’t go on a second.

Thus is the curious case of Chipotle’s new queso dip, the cheesy goodness that has been critiqued nationally for days after Chipotle-goers celebrated its release. Many people aren’t fond of it. So what? Nobody will force you to get it again. Chipotle’s queso dip is unlike traditional queso but adds a new element to the already desirable Tex-Mex cuisine. Perhaps it should have been obvious to me that this opinion would be unpopular when a Chipotle employee didn’t know how to charge me for a small side.

Was it $5.25 or $1.75? She asked two coworkers next to her and was still confused, providing critics with easy fuel. Not only did some not like it, but its newfound uncertainty also added 15 minutes to my order experience.

After being charged correctly (I think), I was eager to try the restaurant’s newest experiment. The first bite was satisfying, as was each thereafter.

Before discussing what Chipotle’s queso concoction exactly is, let’s make clear what it isn’t. It’s not the type of dipping sauce that you would find at an authentic Mexican restaurant. It’s not something you would want on your burrito or bowl or salad all the time. It’s not as flavorful as one might have thought, revealing one problem collegiate Chipotle-goers have: We all have notably high expectations for one of the most popular eateries around campus.

Nonetheless, the consistency was ideal. It was just creamy enough — so much so that it moved enough when you poked it with a chip. Its consistency seems to be among its most critiqued characteristics. If you want your queso dip to move around the way water does, you can pick up Tostito’s in a jar the next time you shop.

Though I only used the queso dip for chips, the combination of garlic, pepper and lemon and lime juices gave the cheese an ideal flavor for the occasion. It doesn’t taste as great after sitting out for more than 20 minutes, but anyone who lets their Chipotle sit that long isn’t worthy of queso anyway.

The sizes seem either too small or too large with no happy medium, but perhaps that will change in the coming weeks. It could be viewed as relatively expensive if you don’t want it on your burrito or in your bowl (Disclaimer: Be wise and get it on the side the first time), but queso isn’t really meant to be an every visit type of addition. It’s more of an “I just got a C- on my statistics exam and need to momentarily feel better” supplement.

I understand why people have used words like “trash” or “garbage” to describe the queso dip. One Twitter user went as far as to call it “a crime against cheese.” But perhaps the expectations were slightly too high.

Scott Gelman is a Chipotle fan, Pitbull fanatic and sports reporter for The Diamondback.