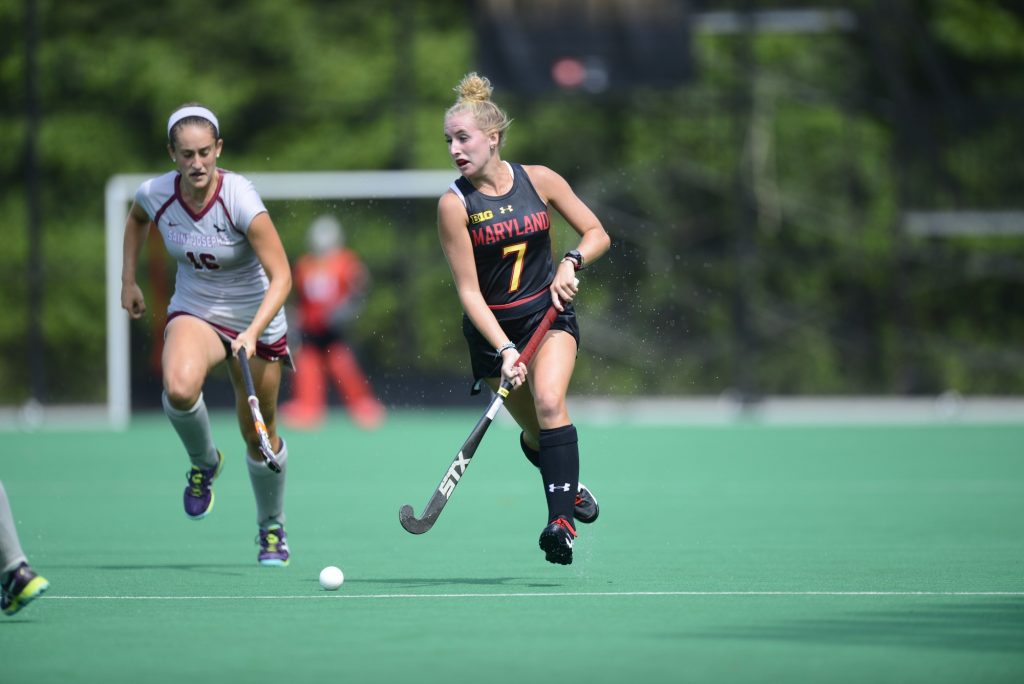 With two defenders and the goalkeeper in front of her during the Maryland field hockey team’s 4-1 win against Bucknell on Sunday, the freshman midfielder tried to tuck the ball into the unguarded net while ensuring her stick didn’t touch the others vying for possession. Four Terps surrounded and watched.

Greenwalt briefly broke away, which enabled her to fire a shot into the lower-left corner of the net. It was Greenwalt’s first career goal, one that she’s dreamt of since she was a Maryland ball girl in third grade.

Greenwalt attended Maryland games and on-campus clinics growing up. She’s always sought to help the Terps win. Against the Bison, her two scores did just that.

“As soon as it hit her stick, I was like, ‘I’m going to be on this. I’m not going to let my team down. I’m going to try and score this,'” Greenwalt said. “I was just ready to play I guess.”

The sequence was a turning point for Greenwalt, who coach Missy Meharg said worked on shot selection through the team’s first six contests. The Gambrills native attempted 15 shots entering Sunday’s contest. None reached the net, prompting Greenwalt’s celebration after both goals against Bucknell.

Greenwalt, who starred at Archbishop Spalding High School, has needed time to develop because of her eagerness to contribute.

On the road, midfielder Lein Holsboer watches Game of Thrones while Greenwalt completes homework in the hotel room. During their conversations, which range in subject from school to field hockey to boys, Greenwalt is animated and boasts the same enthusiasm, likely prompting her immediate success in College Park.

“She’s so eager to do everything perfectly and get all the information in,” Holsboer said. “Sometimes she gets a little hyped about it. We tell her to calm down and focus on one thing. She has such an amazing aura around her.”

That guidance proved beneficial against the Bison, as Greenwalt’s second career score gave No. 9 Maryland a lead it didn’t relinquish. In the 40th minute, she possessed the ball after a saved shot and deposited it between the pipes, giving Maryland a 2-1 edge.

Perhaps her most impressive feat, Greenwalt has appeared in all seven games and started five, emerging as the latest Maryland freshman threat. When she arrived in College Park, Greenwalt aspired to “play a lot.”

Greenwalt is satisfied with the outcome and figures to remain an aggressive member of Maryland’s attack when the Terps host No. 15 Princeton on Tuesday.

“Sometimes she’s just so eager to do well that she’s not taking the time to think [shot attempts] through,” Meharg said. “[Sunday], I thought she grew 100 percent.”

Greenwalt said from the time she first worked during games at the Field Hockey and Lacrosse Complex, she’s felt like she was a part of the team. The atmosphere made Maryland her only desirable university.

When game day arrives, Greenwalt transitions that ambition onto the pitch.