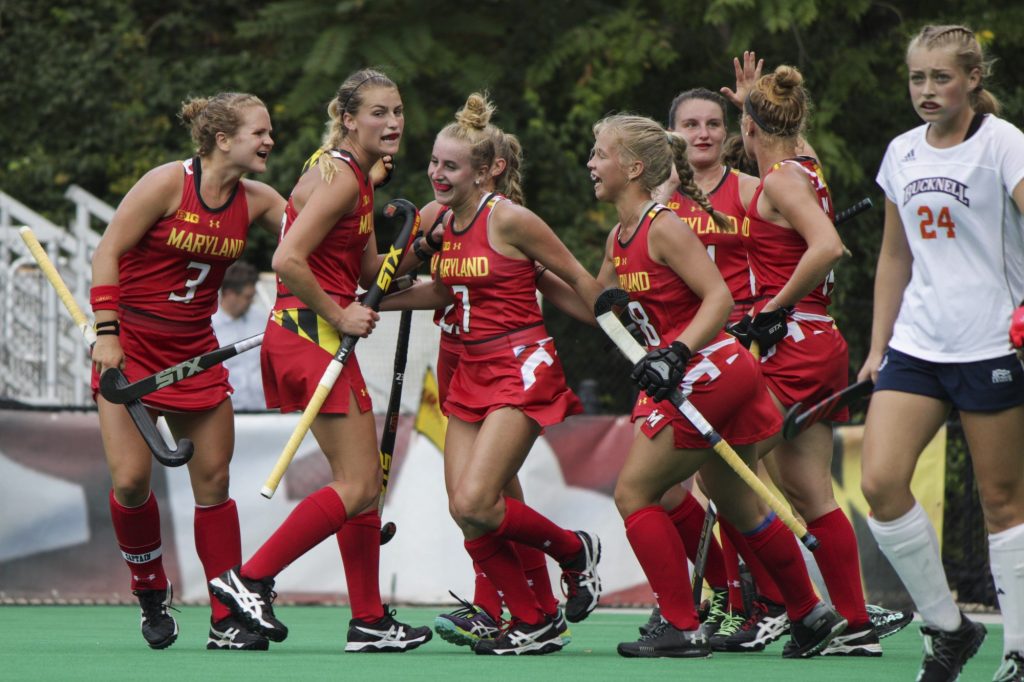 During halftime of the Maryland field hockey team’s 4-1 win against Bucknell on Sunday, head coach Missy Meharg urged the No. 9 Terps to consider the theme of the last few weeks before taking shots. Maryland’s roster boasts six freshman, so the coaching staff urged the team to prioritize making connections.

That meant emphasizing personal skills and understanding how the players can help their teammates. It also resulted in practicing two-touch passes and executing when in the offensive zone.

On Sunday, that cohesive outlook helped the Terps capitalize on their 13 penalty corner opportunities. Though midfielder Lein Holsboer has served as the primary passer off such attempts in the past, Meharg put different players in unusual places during penalty chances against the Bison.

Maryland connected, securing its fourth straight win in advance of hosting No. 15 Princeton on Tuesday night.

“We work so hard in practice to get everyone in the right spot and having big variety on our corners,” Holsboer said. “We just work really hard capitalizing on those opportunities.”

The Terps were unable to execute on their first four attempts, but still, Maryland’s various penalty corner tactics kept the Bison guessing on the Terps’ fifth try.

Freshman midfielder Kyler Greenwalt sent the ball in defender Bodil Keus’ direction, but her shot was saved. The dynamic of Maryland’s personnel, though, left Greenwalt positioned in front of the left-corner of the net. She tucked the ball into the lower-left corner of an unguarded net to give Maryland a one-goal edge.

The Terps took that advantage into the intermission and capitalized on one of their six first-half penalty corner attempts. The backline, meanwhile, didn’t allow the Bison (3-6) to attempt a shot in the opening period, the second time Maryland’s defense has held a team without a shot in a half this season.

Bucknell opened the second half with an aggressive offensive approach, which enabled forward Nicole Rupnik to breakaway and tie the game at one minute into the second half. Still, Maryland’s distinct strategy on its corner attempts helped it establish a substantial lead.

In the 43rd minute, Holsboer passed the ball to defender Carrie Hanks, who was also integrated into Maryland’s corner game Sunday. Hanks sent the ball back to Holsboer in the left side of the circle, and Holsboer deposited it into the upper-left corner to push Maryland’s lead to three.

By the time Holsboer scored the second time about a minute later, the game was seemingly out of reach. The Bison earned just three corner attempts, and Maryland boasted a 36-6 shooting advantage.

After similarly taking advantage of corner opportunities in their conference opener against Indiana on Friday, the Terps’ different personnel groupings on penalty attempts Sunday led them to their third straight home victory.

“Corners are a huge deal,” Greenwalt said. “Once you get a corner, it’s a guaranteed shot on goal.”