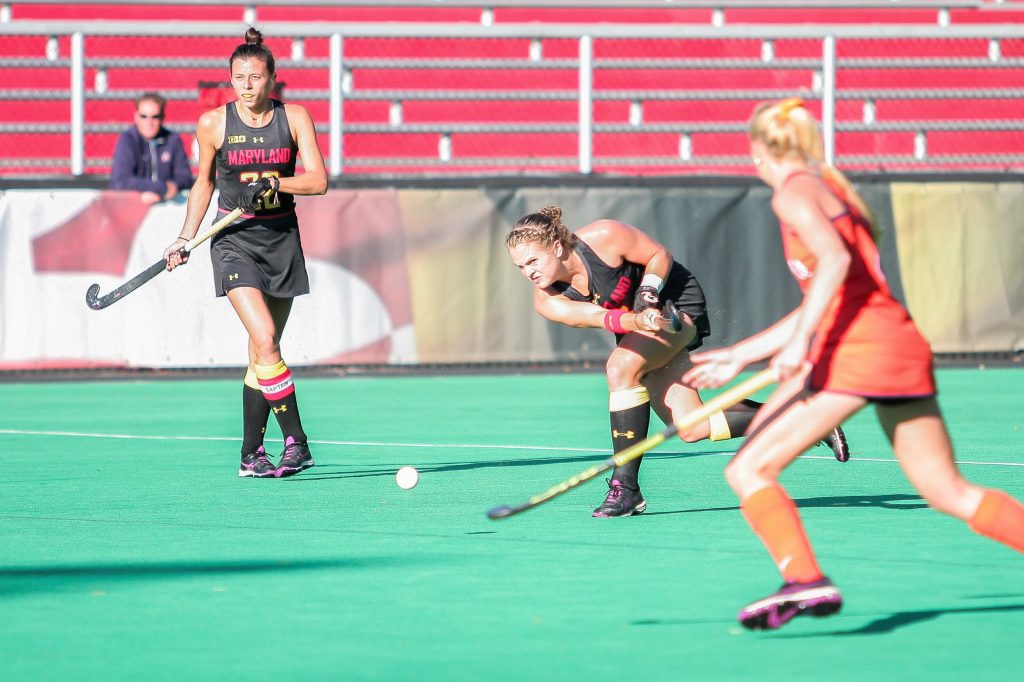 As the Maryland field hockey team participates in practice drills that don’t involve the backline, defender Carrie Hanks gets antsy. She’ll speak to freshman Hannah Bond, but she’ll still use a stick to gently hit a ball back and forth in front of her.

Coach Missy Meharg laughs it off, admiring how the Niskayuna, New York, native always wants to be involved. When the No. 9 Terps practice penalty corners, Meharg studies Hanks’ form. The coach’s conclusion is often the same: Hanks is one of the team’s best at sweeping, hitting and dragging the ball.

Still, Hanks, who Meharg said is routinely the last person to exit the Field Hockey and Lacrosse Complex, receives a reminder before she departs for the day.

“I’m always laughing with her about how, ‘I think you have enough touches on the ball today,'” Meharg said.

Meharg has long held Hanks’ work ethic in high regard, which has earned Hanks a starting spot in 73 of Maryland’s 74 games entering Friday’s match against Indiana. Hanks hasn’t paid much attention to her streak, but the stretch has proved her versatility.

Hanks made 69 consecutive starts spanning three seasons, a streak that ended earlier this month when she served as a substitute against then-No. 2 Duke. Each time Hanks takes the field, Meharg is thankful the defender chose Maryland over Princeton three years ago.

Most recently, Hanks was one of three captains on the U.S. Under-21 team during its tour in England last spring. She contributed on penalty corners and embraced a leadership role, which has helped Hanks lead Bond, freshman defender Sophie Giezeman and the other younger members of Maryland’s backline.

Hanks’ role is notable given she’s usually quiet, but her leadership helped Maryland execute its most complete game this season in a 1-0 win over then-No. 9 Louisville last weekend.

“People think you’re the leader and you know everything and you always have to be at the top of your game,” Hanks said. “I’m taking in learning experiences as they come, growing as a player, but also as a leader in every minute of every game.”

While Hanks has anchored Maryland’s backline since making the position change, the influence she’s had on Bond is notable. Bond, an Oxted, England, native, has started every game and appeared aggressive across the field. Hanks’ desire to always be near the ball has become contagious.

Plus, Hanks and Bond were designated for Maryland’s “Top Terp” program, which pairs a senior and freshman together to bond preseason.

“A designated top Terp assignment more or less has turned into a really special mentoring and sisterhood,” Meharg said. “She’s mentoring her in such a calm, demanding way.”

Hanks, who figures to be in Meharg’s starting lineups against the Hoosiers and Bucknell this weekend, helped the Terps keep Cardinals leading scorer Nicole Woods off the board. Her flexibility and attention to detail continue to impress Meharg, but Hanks hasn’t taken the starting time for granted.

“There are many strong players throughout my four years,” Hanks said. “It was never a guaranteed thing … It’s not necessarily about who’s starting but about the minutes you can contribute.”