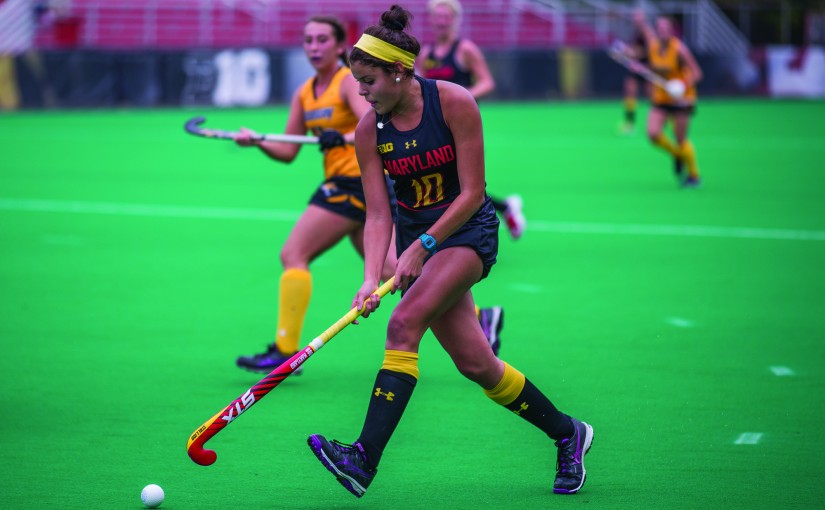 During halftime of the Maryland field hockey team’s 8-0 win against Towson at the Field Hockey & Lacrosse Complex on Friday afternoon, coach Missy Meharg gave the No. 11 Terps three pointers. Then, she exited, insisting that the Terps discuss the second-half strategy among themselves.

It was yet another exercise to get the new-look team on the same page, and forward Julie Duncan said Maryland didn’t get overly technical. Instead, they strategized to maintain their approach, already carrying a two-goal advantage into the second half.

The outlook proved beneficial, as Maryland scored six times after the intermission to end a two-game losing skid. And the Terps did it convincingly, outshooting Towson, 58-0, on the afternoon.

Maryland’s 58 attempts were the most in program history, breaking the previous mark of 51.

“In every minute and a half in hockey, something happens after a goal is scored,” Meharg said. “Once the string starts coming, if you keep it up, something highly volatile is going to happen.”

That’s precisely what guided the Terps, who averaged just a goal per game entering Friday’s contest. In the 50th minute, forward Linnea Gonzales scored for the second time, tipping the ball into the net behind Tigers goalkeeper Emilee Woodall from about five yards out.

Six Terps scored against the Tigers, a significant stride for an attacking unit that is without its top two goal scorers from last season.

Halfway through the second period, the Terps doubled their shot total from their matchups against the Blue Devils and Eagles. They recorded just 18 shots overall against two top-15 teams last weekend.

Meharg said Towson decided to “play everybody under the ball,” which sometimes could be challenging to play through. But even with a first-year center back and first-year right back, the Terps didn’t have much trouble.

“Everyone was getting opportunities and different people were getting in,” Gonzales said. “That was really nice.”

There was evidence of Maryland’s youth — missed passes and crowded zones when the Terps had possession inside the arc — but the adjustments the team said sparked its second-half rally against Boston College were evident.

From there, the Terps didn’t look back. Maryland dominated possession and couldn’t be slowed. The outcome might have been more lopsided if Woodall didn’t notch 34 saves.

Towson head coach Heather Hodges was left frustrated, urging her players to continue sprinting with about 29 minutes remaining in the game. But the Tigers were unable to slow Maryland’s offense, which continued to try and add to its lead as the final seconds ticked off the clock.

Meharg’s halftime strategy helped lift the Terps, who despite the dominant effort want more of their shot attempts to land in the net.

“We need to work on our outcomes,” Gonzales said. “Fifty-eight shots is a lot. I think we can get more goals next time.”