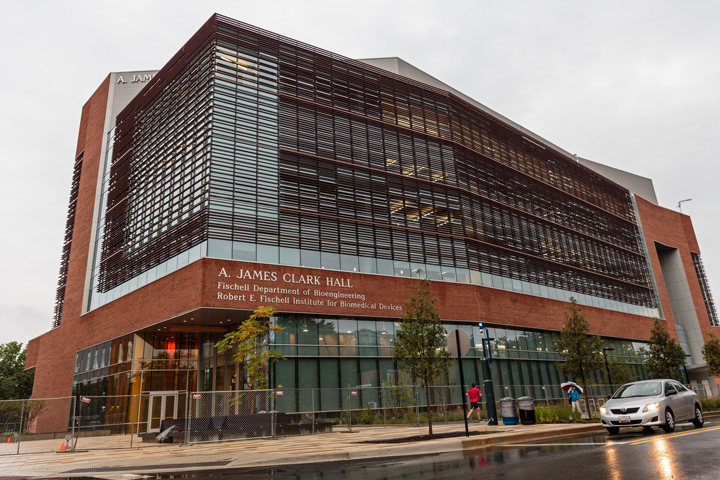 The construction of Clark Hall, the new home to the University of Maryland’s bioengineering department, will be completed later this month, with professors moving into offices this fall and classes in the building starting spring 2018.

The final phases of construction include installing audio and visual systems in various rooms and adding finishing touches to some of the building’s mechanical systems, said William Olen, director of capital projects for Facilities Management. Furniture deliveries for the building began Aug. 21, Olen said.

The $169.1 million, 184,000-square-foot building will include roughly 25,000 square feet of research space for faculty and graduate students, said John Fisher, the bioengineering department’s chairman. The project was previously slated to be completed by June.

For students, such as those building biomedical technologies, “this is going to be a tremendous expansion of space,” Fisher said. “Fostering those student groups … will be a major use for these new facilities.”

[Read more: Clark Hall is on schedule to be complete by June 2017]

The fifth floor, however, is for a new program, the Robert E. Fischell Institute for Biomedical Devices, Pines said. The institute emerged from the bioengineering department’s founding mission, which was envisioned as a pipeline for students to study and develop biomedical technologies, he said.

Fischell is a 1953 graduate of this university and holds more than 200 patents for products including lifetime pacemaker batteries and implantable insulin pumps, according to the engineering school’s website. Fischell also helped to establish this university’s bioengineering department.

“When the [bioengineering] department was formed, Dr. Fischell was very much interested in biomedical devices,” Pines said. “He started the department to build an undergraduate stream of students who would hopefully go on to the graduate program to work on future biomedical devices that might help improve human life.”

By consolidating all of the latest technology — from 3-D-printed materials to wet laboratories and large testing spaces — innovators can flesh out ideas, build prototype designs and test them out in a streamlined, easily accessible space, Pines said.

A group of undergraduate students recently built a 3-D-printed measurement device that can go around a person’s head to measure brainwaves and relate them to early detection of Alzheimer’s disease, Pines said. The seven undergraduates who built that device took first place at this year’s National Institutes of Health Design by Biomedical Undergraduate Teams challenge, Fisher said.

“That’s the kind of device that we wanted to encourage our undergrads and grads to research, to create the prototypes in these new facilities so that it might extend human life and improve human life on the planet,” Fisher said.

Clark Hall is named after Alfred James Clark, a 1950 alumnus of this university and the owner of Clark Construction Group, which has built 26 other buildings on the campus, Pines said.

Funding for the project came from multiple sources, with $146.5 million from the state of Maryland and another $1.96 million from this university, Olen said.

Among private donations, about $15 million came from Clark before he died in March 2015, and about $6 million came from Fischell, Pines said. On Nov. 10, a dedication ceremony will be held in honor of both men’s contributions to the university, and the Clark and Fischell families will likely be in attendance, he added.

“It should be a fantastic event; it should honor these two gentlemen for their contributions, but also — just a little hint — it will showcase some projects some of our students are working on and some they have already done,” Pines said.

One such example of student innovation was the UMD Hyperloop Team — which aims to decrease commute time through a levitating pod that moves close to the speed of sound — that competed at the SpaceX Hyperloop Pod Competition in California this August, Pines said.

“They didn’t use Clark Hall, but boy, would it have been so much better if they had,” Pines said. “Even though they did really, really well — they were in the top six of all competitors of 24 or 25 teams — maybe they could have been in the top two, had we had this better space.”

Clark Hall will house an Innovation Lab with dimensions about 300 feet long, about 50 feet wide and 25 feet high, Pines said. This will help engineers work on larger projects like a Hyperloop pod within a controlled environment, he said.

“There’s just so many opportunities, because the space has all the accessories and the volume to study these complex problems and come up with solutions,” Pines said. “I think we can’t even imagine some of the things we might be able to do when we get going.”