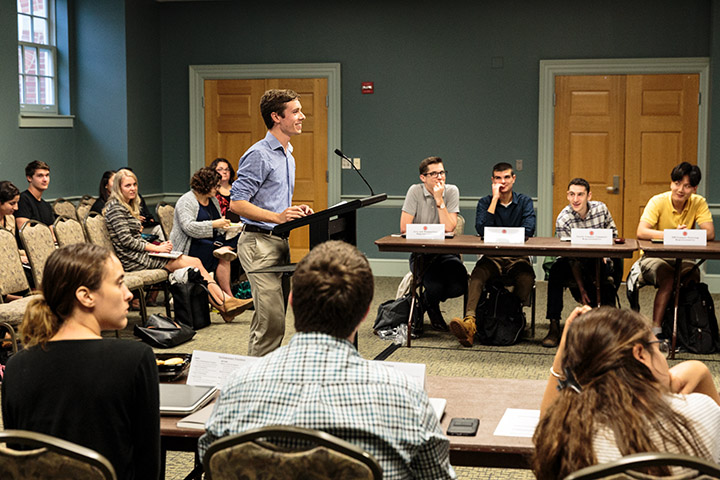 During the SGA’s first meeting of the semester Wednesday, members discussed issues ranging from President Trump’s decision to end the Deferred Action for Childhood Arrivals Program, to campus concerns such as student voter registration and student government election reform.

The Task Force on Election Reform, a group that Student Government Association President A.J. Pruitt established shortly after SGA elections in the spring, presented their goals for the coming months, when the group will be investigating how the SGA can increase voter turnout and encourage more competition for student government elections.

In the spring, the One Party was the only party that ran in the SGA elections, after the Unity Party withdrew following a Diamondback report showing the party violated election rules. The presidential race was between A.J. Pruitt, current SGA president and long-time student government member, and Christopher Boretti, an unaffiliated candidate with no prior SGA experience.

Christian Knapp, the chair of the task force, said factors such as having candidates with diverse viewpoints and backgrounds, advertising and ease of information access to constituents are essential to consider in improving voter turnout and competition between candidates.

Knapp and Nathaniel Zumbach, SGA’s business school representative, are the only two on the committee so far. The task force plans on recruiting two non-SGA members and one SGA member to join the group by next week.

The task force plans to interview students next week from various campus organizations to find out what they know about the SGA, and why they chose to participate in or refrain from SGA-related activities, Knapp said.

“We have a lot of students who are involved in political activism on campus who aren’t involved in student government for one reason or another,” said Knapp, a senior government and politics major.

Knapp said he wants to determine if factors such as the amount of time the election period is open, or the amount of information publicized affect voter turnout and competition.

While it is important to have a task force to address this issue head-on, Knapp said he is skeptical the task force’s findings will directly affect the voter turnout and competitiveness in the 2018 election. The difficulty in “engineering political and social outcomes [and] the possibility of false positives” when implementing any policies may interfere with the task force’s ability to achieve its goals, Knapp said.

“Despite the high probability of failure, the 5 percent chance that we do make a real difference in making sure we have competitive elections is that student government on this campus is really worth it,” Knapp said. “Having a democratically elected student government is very important and I think our students at the University of Maryland are worth it.”

Pruitt said he does not think anyone will find the exact solution that solves the issues that have come up in SGA elections. Elections even on the national level can see low voter turnout as well, Pruitt said.

“We do need to get up from where we are and I do think that’s possible,” Pruitt said. “I think it’s possible by making some shifts to election rules, but it’s also possible by, as an organization, entering more students’ lives and affecting them on a daily basis.”

The SGA plans to vote on an initiative next week that would enable the organization to support and become involved with the TerpsVOTE Voter Registration Drive Coalition. The coalition, made up of several campus student groups, plans to encourage students to register to vote for elections in which they are eligible, such as city and state elections.

The SGA traditionally spearheads the initiative to register students for major national elections, said Georgie Jones, director of civic engagement for the SGA. However, this is the first time that the coalition would promote voter registration for state and local elections through TurboVote, an online service that assists in the voter registration process.

Jones, who is working closely with the TerpsVOTE initiative, said one of her major goals is to find a way to engage students in the College Park City Council election. The senior government and politics major said she wants to increase voter education and awareness.

Pruitt said it is important students register to vote because their ability to have a say in elections strengthens the student body voice in discussing and advocating for relevant issues.

The SGA also approved appointments for legislative secretary, the governance board and the finance committee. Connor Peterson, a sophomore government and politics major, will fulfill the role of legislative secretary. The SGA approved Pruitt’s appointment, Lilia Abecassis, a senior government and politics major, to serve on the governance board. Vice President of Financial Affairs Alia Abdelkader appointed Katrina Delos Reyes, a sophomore computer science and mathematics major, and Andrew Stover, a sophomore public policy major, to serve on the finance committee. The SGA approved both appointments.