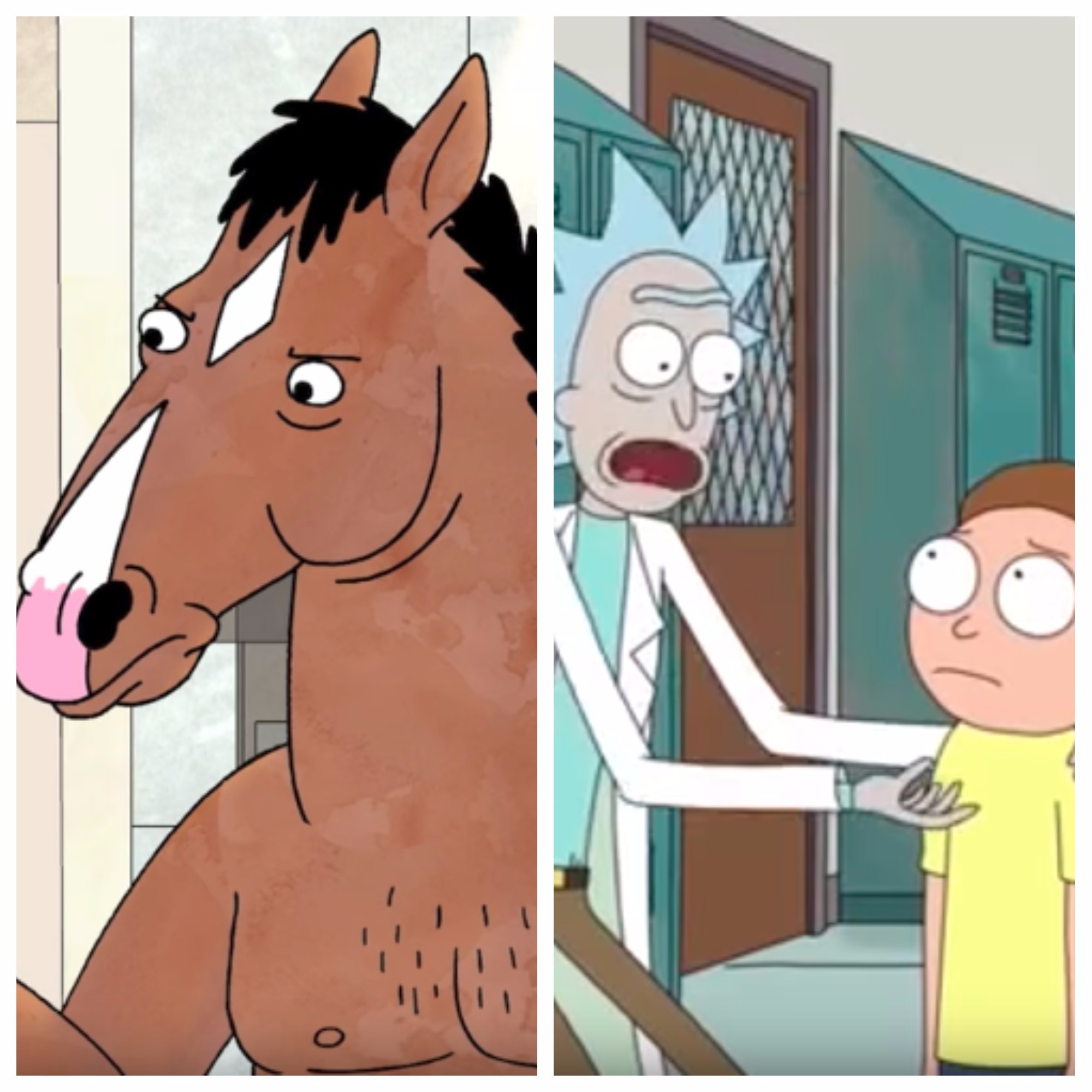 Season four of Netflix Original BoJack Horseman premieres Friday, and fan-favorite Rick and Morty is more than halfway through its long-awaited season three. The two adult cartoons have stood out among other similar programs, receiving acclaim from fans and critics alike.

But these shows don’t have endless backlogs of episodes to binge. In fact, Rick and Morty has a total of 27 episodes, and BoJack Horseman streamed 36.

So, what makes Rick and Morty and BoJack so unique compared to other cartoons? The short answer is that they are both character-driven series. Instead of 20 minutes about a goofy family’s misadventures that conclude in a relatable lesson, these shows capture complex character arcs and emotions. The characters feel the consequences of their actions ­— not just in one episode but throughout the show.

Let’s look at Rick and Morty first. The show’s subject matter is about as dark as possible. Somehow, the writers and animators find a way to make horrifying subjects humorous. The premise of a grandfather and his grandson going on a new sci-fi adventure every week is simple and funny on its own. The show makes us laugh at things like Rick creating a mini-universe full of unique people in a battery just to power his car or jumping to a parallel universe to take the place of another version of himself who dies when his own universe collapses.

The show’s mystique is that literally anything can happen. Rick often boasts that he can travel to every conceivable universe and do anything. The consequences are real, but not for Rick or Morty. It’s funny because what we’re watching is so fictional that we don’t feel the impact or the horror that the people left in Rick and Morty’s wake do. In the meantime, we’ve been along for the ride with them and gotten to know the characters well.

Instead of watching funny adventures where the protagonists rarely face consequences, the adventures hit close to home. At no point is this more tangible than in season three’s episode “Pickle Rick.” A long-advertised episode that had fans excited for action turned out to be a story about avoiding therapy. Rick didn’t transform himself into a pickle because he thought it would be cool or impressive, he did so because pickles are incapable of going to a therapist appointment.

The true darkness of the episode comes at the end, when Pickle Rick makes his way to the therapist’s office to reunite with his daughter and grandchildren. Morty’s mom drives everyone home from the appointment, and she ignores her own kids’ subtle cries for help to return to therapy. Instead, the grown-ups in the car would rather drop the kids off and go get a drink without them.

For the first time, something is dark because it’s real. There’s no adventure — just a family we’ve grown to know over two and a half seasons — sitting in a car, not talking about issues they could easily resolve if they just took therapy seriously.

BoJack on the other hand, does the opposite. There are frequently episodes of the show with little-to-no laughs, yet the drama of the show is palpable. A dark line about life being fulfilling is tragic in one episode, and in the next it’s comedic.

The genius of the show is that it makes the audience feel complex emotions, then asks why they’re sad if this show is about an anthropomorphic horse who’s trying to win an Oscar. The subject matter is absurd, but it offers powerful commentary on Hollywood, society and relationships.

BoJack’s genius moment occurred last season. For a show that uses wordplay and silly jokes juxtaposed with dramatic emotion, it’s easy to get lost and become numb to certain characters. But BoJack doesn’t let you do that. In season three, BoJack apologizes to his close friend and moocher, Todd (voiced by Aaron Paul), whose role is never anything more than comedic relief. BoJack apologizes and tries to blame his transgressions on a rough past and childhood. Todd sidesteps the explanation and tells BoJack that it’s his fault and that he needs to take responsibility for his actions.

At no point in these shows should the audience be comfortable with what’s happening, and the writers know that. They’re like us. It’s almost as if they’re examining the subject matter of the show with us and saying, “Why is this funny? Why is this sad?” In doing so, the creators share some of the process. It becomes a communal experience.