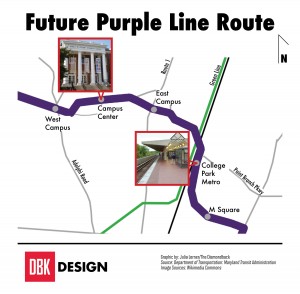 The Purple Line is set to get full federal funding with an agreement signed “in the very near future,” a spokesman for Gov. Larry Hogan said.

Without government money, the state cannot afford to construct the 16.2-mile light-rail system, which would span from Bethesda to New Carrollton and pass through College Park. But with this agreement, the state can access $325 million in already-appropriated funds, as well as $900 million through the agreement’s full duration, The Washington Post reported.

President Trump’s 2018 budget proposal had previously put the future of the Purple Line at risk, as local entities would be forced to pay for transportation-related items that did not have federal agreements. The Trump budget also threatened to limit other local transportation options that received federal funds, including bike trails and pedestrian infrastructure.

The Purple Line was originally scheduled to be complete in 2022, according to the Maryland Transit Administration’s website, but the project has faced delays. In August 2016, U.S. District Judge Richard J. Leon said officials had to further examine ridership and safety elements before it could receive funding.

Leon questioned in May how a decline in Metro ridership would affect plans for the Purple Line, leading Maryland transportation department secretary Pete Rahn to order officials to halt pre-construction efforts.

The Purple Line, which local officials have cited as a key part of urbanizing the city, is slated to have five stops on or near the University of Maryland’s campus: Adelphi Road/West Campus, Campus Center near Cole Field House, East Campus near Ritchie Coliseum, the College Park Metro Station and M Square on River Road.