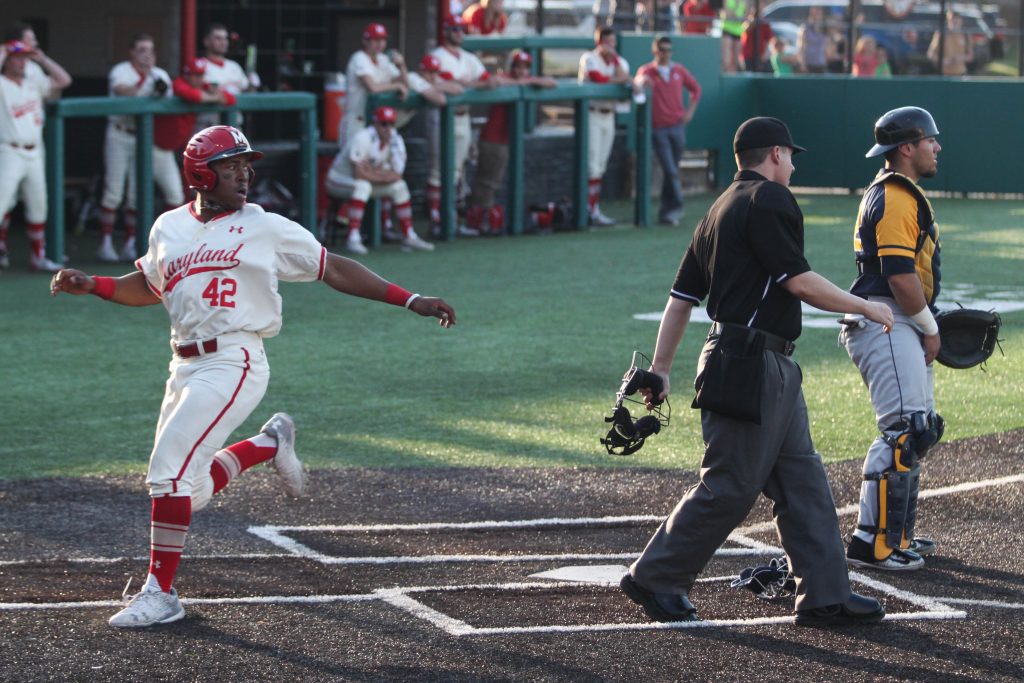 The Seattle Mariners selected Maryland baseball right-hander Jamal Wade in the 17th round of the MLB Draft on Wednesday afternoon. Wade became the second Maryland pitcher to be selected after the Diamondbacks took right-hander Brian Shaffer in the sixth round Tuesday.

Wade continued to transition as a pitcher during his junior season with Maryland and was used as a middle or long reliever. Over 19.2 innings, he pitched to a 5.03 ERA but held opposing hitters to a .203 average.

Wade walked 13 and struck out 33 this season. The Owings Mills native hit .267 with six doubles, two home runs and 11 RBIs in the New England Collegiate Baseball League last summer. He also pitched to a 1.59 ERA and recorded 21 strikeouts over 11.1 innings.

As a hitter, Wade revealed his power in College Park. His first three career hits with the Terps were home runs. Wade has been a two-way player since his days at St. Paul’s High School, when he played third base and shortstop and pitched. He received seven at-bats this season but predominantly served as a pitcher.

Wade’s older brother, LaMonte, played for Maryland and was selected by the Twins in the ninth round of the 2015 Draft.

The Houston Astros selected Maryland baseball right fielder Marty Costes in the 25th round of the MLB Draft on Wednesday. Costes was one of two Terps hitters picked in the draft, after the Toronto Blue Jays selected shortstop Kevin Smith in the fourth round Tuesday.

Before the draft, Perfect Game’s Brian Sakowski said there was “some buzz” that Costes might be selected in the first 10 rounds.

Despite occasional defensive miscues — Costes made six errors in 2017 — the Baltimore native emerged as a dominant power threat in the middle of the lineup. He ended the season hitting .322 with 13 home runs and 46 RBIs, notching the third-highest on-base percentage (.429) on the team.

Costes had success with the Baltimore Redbirds in the Cal Ripken league last summer, hitting .319 with seven home runs and 24 RBIs over 35 games.

There is a chance Costes returns to College Park for his junior season to improve his draft stock. Costes was a draft-eligible sophomore.

The New York Mets selected Maryland baseball right-hander Ryan Selmer in the 31st round of the MLB Draft on Wednesday. Selmer was the third Terps pitcher to be selected.

For most of the season, Selmer was former coach John Szefc’s most consistent late-game option. However, he struggled toward the end of the year.

Still, Selmer ended the season with a 3.05 ERA in 41.1 innings, earning eight saves and appearing in 27 games.

A year after struggling with the Gaithersburg Giants in the Cal Ripken League, Selmer pitched to a 3.18 ERA over 22.2 innings for the Wareham Gatemen in the Cape Cod League last summer.

At 6-foot-8 and 220 pounds, Selmer could emerge as a bullpen prospect for the Mets. He made four starts during his time in College Park.

The Miami Marlins selected Maryland baseball right-hander Jared Price in the 37th round of the MLB Draft on Wednesday.

Price had the best season of his collegiate career with the Terps this season. Over 23.2 innings, he pitched to a 3.04 ERA. Price walked nine hitters and struck out 27.

Before his senior season, Price, who received a medical redshirt because of an injury in 2016, pitched well with the Silver Spring-Takoma Thunderbolts in the Cal Ripken League. Over 12.2 innings, Price put up a 3.55 ERA.

Price posted a 6.42 ERA during his first three full seasons with the Terps.