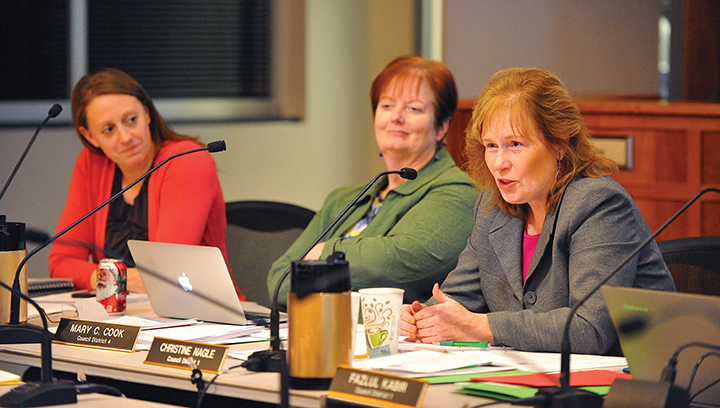 Councilmember Christine Nagle speaks during a council worksession on Feb. 2, 2016.

Cardiff Andana, a 24-year-old College Park resident, would “love to get more involved” in the city’s elections — but right now, he can’t.

Though Andana has lived in District 1 for about 12 years, he cannot vote in the city’s municipal elections because he is not a U.S. citizen.

“There are a lot of people who are also in the same position that I am. We’re not citizens, so the law prevents us from making our voice heard in terms of how our lives and the district are run,” said Andana, an Indonesian citizen. “Most of the people that are also in my situation, at least the ones that I know, are very smart, are willing to read, and listen and see what’s going on around them. … We know what we’re doing and we’re knowledgeable about what candidates we [would be] voting for.”

College Park currently uses the voter’s list supplied by the Prince George’s County Board of Elections, which must comply with the state of Maryland’s voter registration qualifications. State qualifications include a requirement that a person be a citizen of the United States, among others.

On Tuesday night, the College Park City Council introduced a possible amendment to the city’s charter to eliminate U.S. citizenship as a voter registration requirement for city elections and authorize a supplementary city voter registration list. The public hearing for the amendment has been scheduled for July 11.

The proposed change could go into effect by the next election in November, said Janeen Miller, the city clerk. If the charter amendment is adopted on July 11, the first opportunity to do so, the decision would take effect 50 days later, provided it is not petitioned for referendum by citizens, Miller said.

“I think it would be a great opportunity for us to engage more of our residents to empower them to participate in our municipal government by allowing them to have a say in the vote,” Nagle said at the work session. “These are people, a lot of them, who, they pay property taxes, they pay income taxes, their children are in the schools and yet they’re not able to have a voice in our municipal elections, about things that impact their daily life. I really would like to see us move forward in this direction.”

In Maryland, seven municipalities allow non-citizens to participate in their municipal elections, Nagle said. The most recent addition, Hyattsville, is the first in Prince George’s County to allow it, Nagle noted.

As of 2015, 86.5 percent of College Park residents were U.S. citizens, which was lower than the national average of 93 percent, according to Data USA.

Mayor Patrick Wojahn said allowing non-citizens to vote in the city’s elections would help ensure the city government is accountable to both citizens and non-citizens alike.

“Our community is increasingly diverse and, as an elected official of the city, I personally feel it’s important to serve all people who live in the city and rely on the city for services and pay taxes to the city, regardless of their citizenship status,” Wojahn said.

But Zari Malsawma, a District 4 resident who became a naturalized U.S. citizen in 1984, disagrees with the measure.

“I’m not for it at all,” she said. “I think that voting is for people who know what citizenship is all about, what it means to be a citizen of the United States and [what] the privileges are, and what the responsibilities are.”

Malsawma, who is originally from India, thinks that many Americans take their rights and responsibilities as citizens for granted, which results in them not “doing their part to maintain these privileges,” she said.

“For us to say, ‘non-citizens can come and vote [in municipal elections],’ that really undermines the value of American citizenship,” Malsawma, who has been a College Park resident for about 44 years, said. “And I treasure mine.”