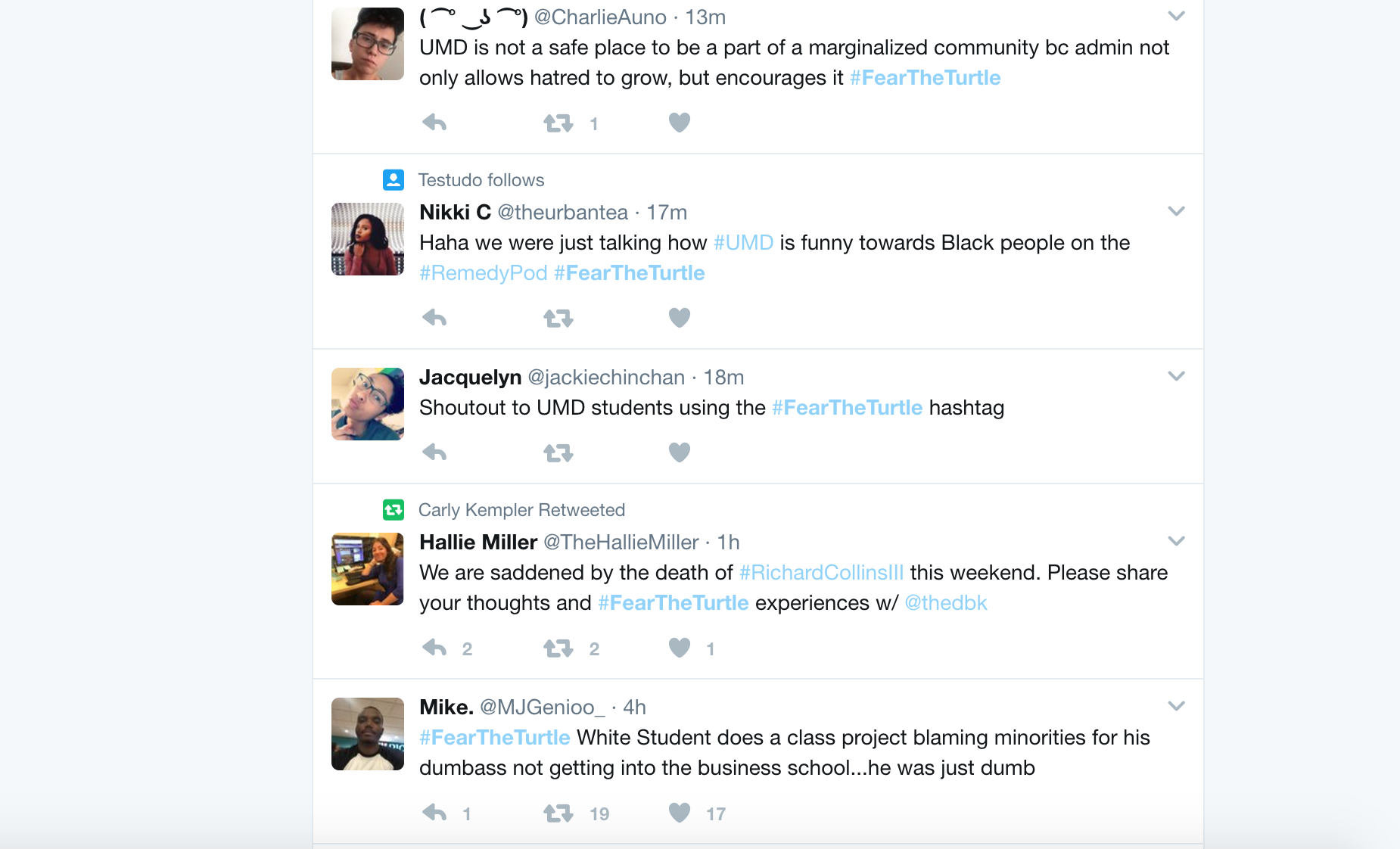 On Saturday, former Bowie State University student Richard Collins III was fatally stabbed outside Montgomery Hall. University of Maryland student Sean Urbanski was charged with first- and second-degree murder, as well as first-degree assault, in connection with the stabbing.

Originally, University Police said the crime was not race-related. Urbanski, a white man, appeared to be a member of the racist Facebook group “Alt-Reich: Nation,” and University Police are now working with the FBI to determine whether the stabbing was in fact a hate crime.

This university’s students, alumni, staff and faculty took to Twitter with the hashtag #FearTheTurtle to share their thoughts, fears and experiences of racism, discrimination and hate on the campus.

freshman year @ a white frat party I told a guy in the frat i was from Iran. He yelled FUCK YOUR COUNTRY&high fived his bro. #FearTheTurtle

my first week in college park a white kid told me at a party that obama was a monkey & that all black girls were ugly #FearTheTurtle — beza (@itsBayzuh) May 22, 2017

“Harmless” racist jokes that many thought would stay on YikYak manifested on our campus’s sidewalks and bathroom stalls #FearTheTurtle — The Great Stone ???? (@Alexis_Ojedi) May 22, 2017

While university President Wallace Loh and the university administration have created various task forces and groups to address diversity and sexual assault on the campus, some members of the community have found his responses inadequate and dismissive.

#FearTheTurtle Please read one of the many opportunities Pres. Loh had to do something to stop hate at UMD and chose not to https://t.co/3EwsciSd7X — Erica Fuentes (@EricaYoFuentes) May 22, 2017

Had a convo w Pres. Loh about need for mandatory anti-racism and diversity training for students/faculty… he told me it was a waste

Loh has spoken out against President Trump’s racist rhetoric and travel ban, but one student columnist wrote that Loh has already undermined the legitimacy of marginalized students on the campus, especially when responding to groups such as ProtectUMD — a coalition of 25 student organizations at this university —and their demands for safety.

when a UMPD officer whispered in my AfAm student’s ear: “I could f&ckin’ ruin your life right now if I wanted to.” #FearTheTurtle — jessica (@jluwrites) May 22, 2017

#FearTheTurtle SGA member asked if I was a new member of the diversity council when I stepped into a meeting. THAT’S NOT ALL WE HERE FOR. — jocelyn ???? (@Minuta_Mami) May 22, 2017

“Why am I getting pulled over sir?” “You looked out of place. Where are you coming from?”#FearTheTurtle — Nikki C (@theurbantea) May 22, 2017

Several other students, professors and members of the community have also tweeted with #FearTheTurtle since the incident.