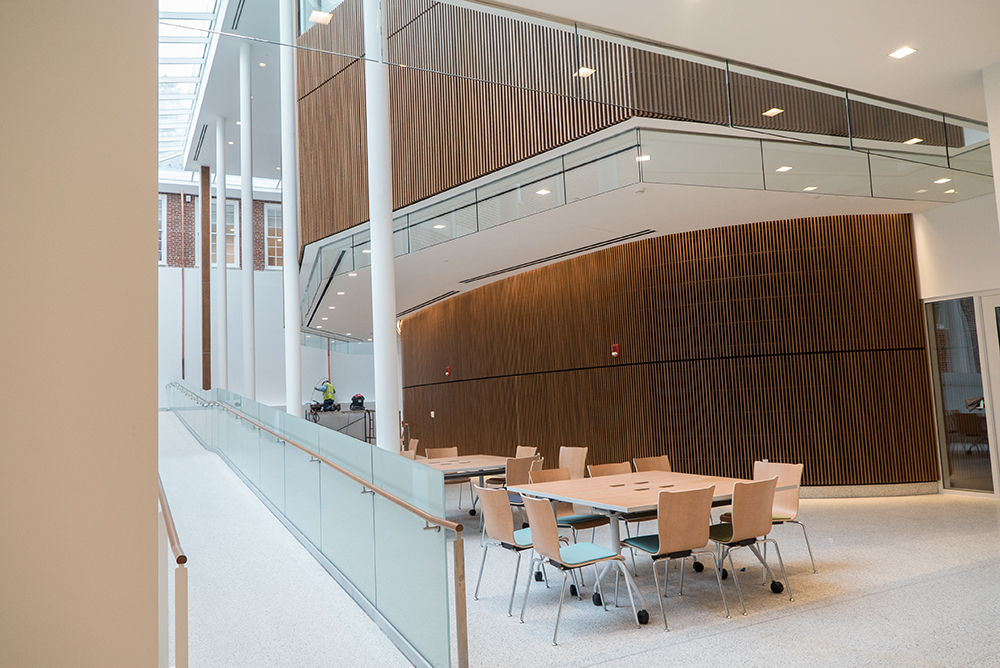 About 250 guests, faculty and student volunteers gathered in the recently completed Edward St. John Learning and Teaching Center on Thursday for the building’s dedication ceremony.

The large lecture hall, which can seat 238, used for the ceremony was filled, with some people standing in the back. University President Wallace Loh thanked everyone for attending the ceremony despite the rain.

The event comes less than three weeks before the 187,000-square-foot space is scheduled to start hosting classes for the summer session, Loh said. The building features 12 classrooms and nine labs; about 12,000 students coming through the building each day during the academic year, St. John said.

St. John, a 1961 electrical engineering graduate of this university, donated $10 million toward the building with the intent that the space would be used for collaborative learning.

“When I went to school, you had lecture halls, and you just sat there and listened, and there was very little interaction with the professor,” he said. “Most of those students just fell asleep in those big lecture halls, including me.”

Because of this, every classroom is designed in a collaborative fashion, which allows students form into groups easily. The professors who are selected to teach in the space are encouraged to attend classes that teach them how to fully utilize the new technology and resources that the building has to offer, St. John said. Classrooms have multiple projectors that will allow professors and students to project on more than on wall in the room, as well as the ability to project material on the screen from a student’s laptop. Training to use this technology will be done through the Teaching and Learning Transformation Center, which is located within the new building.

St. John, the chairman of St. John Properties, is a successful businessman now, but he wanted to be a pilot when he came to this university, he said. In an attempt to join Air Force ROTC, he signed up for electrical engineering when he learned that that was the preferred major, and he said the school required a 2.0 GPA to graduate. St. John said he graduated with a 2.01.

He noted that his mother wanted him to take over the family business, and the real decision to switch career paths happened over drinks with friends at Town Hall Liquors on Route 1.

“Town Hall was the watering hole,” he said. “My two roommates from Delta Tau Delta fraternity and I went up there, and over a six-pack of beer, we decided I should drop the flying thing and take over the business.”

Thomas Mike Miller Jr., the president of the Maryland Senate, made a comment about St. John’s connection to the bar, saying Town Hall is where he and St. John ended up after having dinner with Loh, following the announcement of the donation.

“He’s never forgotten where he came from, and that was College Park,” Miller said.

Miller noted that when he attended this university for four years, there were no new buildings or constructions going on. Now, with Clark Hall also opening soon and the Iribe Center adding infrastructure to campus, it’s progressing, he said.

Clark Hall is the campus’s new bioengineering building, and construction is supposed to be completed in June. The Iribe Center, set to open in 2018, is a computer science building. Brendan Iribe donated $31 million to build the center and create a scholarship in his name.

In his speech, Loh said the university had been waiting for this building for 25 years, with it being one of the many items on the capital improvements projects list that needed funding. Before St. John’s donation, it “was not making progress,” Loh said.

“The new labs give us the ability to actually grow the lab exercises into something that we think is the way chemistry ought to be taught,” said Michael Montague-Smith, senior chemistry lecturer and director of Undergraduate Studies. “The fact of the matter is that it’s a modernization and a step forward that allows us to grow as a department.”

Nazar Bedi, a senior economics major, volunteered to give tours to guests at the event.. Although she is graduating so she won’t have class in the building, she shared the enthusiasm that many of the guests displayed.

Bedi said she had gone on a hard-hat tour of the building when it wasn’t fully constructed.

“It’s crazy that it developed into something so nice,” she said. “I think people were mostly stunned about how many classrooms there are in here and how collaborative they are.”

St. John said he would ultimately like to see the collaborative learning promoted by the center spread to other buildings on campus.

“I strongly believe that education has the power to transform lives and strengthen communities,” St. John said. “I hope the building and its methodology inside not only impact this university, I hope it impacts all universities. I hope it helps transform the way people learn.”