Brendan Iribe donates $500,000 to get more women involved in computer science at UMD 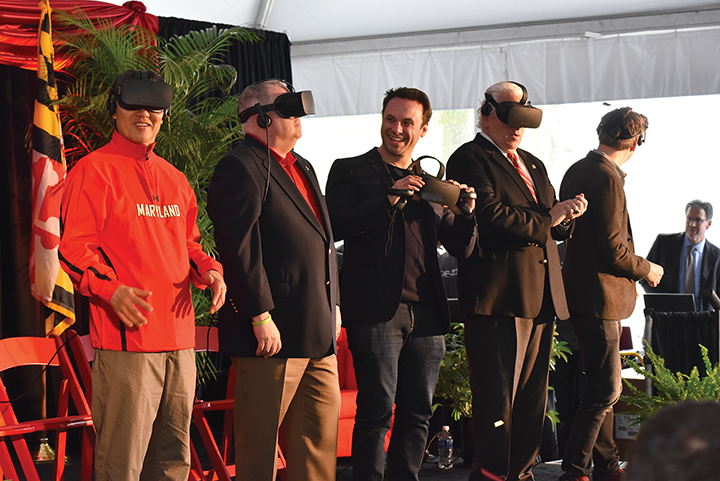 Brendan Iribe, CEO and co-founder of virtual reality company Oculus VR, donated a total of $500,000 to various initiatives in the Computer Science Department to encourage women and other underrepresented students to participate in the program.

The donation, which will give $100,000 each year for five years, will go toward sending students to the annual Grace Hopper Conference, tutoring support for computer science classes, expanding Compsci Connect, among other initiatives.

“He’s a very generous individual, no doubt about it,” Samir Khuller, professor and Elizabeth Stevinson Iribe Chair for Computer Science, said. “He is passionate about trying to figure out ways in which students who haven’t had much access to computer science can be encouraged to go into the field.”

The amount of women in the computer science program has increased drastically, but Iribe wants to expand that number even more and also expand other minority groups’ participation in the major as well, Khuller said. Five years ago, about 10 percent of students in the major were women, but currently 600 out of 2,800 students are women, he added.

Iribe plans to donate $30,000 per year over the course of the next five years for students traveling to the Grace Hopper Conference, which is the largest gathering of women technologists in the world. The University of Maryland sends about 50 students to the conference each year. This university pays for student’s flights, hotel and registration fee, which totals about $1,000 per student, Khuller said. With this donation, Khuller hopes to send more students to the event this year in October.

“This conference shows [students] that the field is full of women and gives an opportunity to network outside of the university as well,” Khuller said.

Compsci Connect, a three-year program that introduces middle school girls to computer science, will receive $40,000 per year. It is part of The Maryland Center for Women in Computing, which works to increase diversity in computer by providing opportunities for women and other underrepresented minorities to engage in computer science.

“Without donations from people such as Brendan, we would lose money because we keep the prices really low so we can get more people from underrepresented populations into the camp,” Jan Plane, director of MCWIC, said. “We are able to teach these girls at a young age how computing is being applied in other areas, which wouldn’t be possible without the donations we receive.”

Plane added that, due to Iribe’s donation, the number of students enrolled at the camp will double.

“Five years from now many of those students might decide to come to this university because of their experience at the camp or the outreach programs,” Khuller said. “So Iribe’s donation to that program still affects the university in a positive way, even though it isn’t directed specifically at current students.”

The Maryland Center for Women in Computing’s new tutoring program will receive $10,000 per year. About 250 tutoring appointments were scheduled in the past year with four tutors, Kate Atchison, MCWIC coordinator, said. The overall budget of this pilot program was less than $2,000, but with the donation, Atchison said there will be more staff and two more computer science classes will be available for tutoring. Currently the program offers tutoring for two classes.

Iribe, a former University of Maryland student who dropped out his freshman year, also donated $31 million in 2014 for the creation of a new building named the Brendan Iribe Center for Computer Science and Innovation, which is currently under construction. Of that donation, $1 million went to a scholarship fund that is awarded to two students per year. Iribe also donated last month to the student-run and nonprofit organization Startup Shell, which provides a network for student-run startup companies to expand.

Jamie Matthews, a junior biology and computer science major, said she was excited to hear about Iribe’s donation.

“At the beginning when I joined the computer science major, I was hesitant because most of my classes are male-dominated,” Matthews, recipient of the Brendan Iribe Endowed Scholarship, said. “But due to the effort of the department to make me feel welcome, I now feel like I belong and I am excited that other students will have that opportunity as well through this donation.”