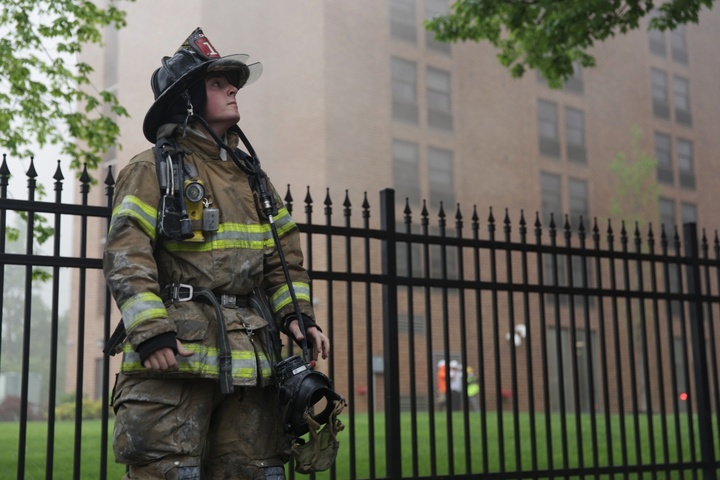 The Prince George’s County Fire Department responded to a fire at the under-construction Fuse 47 apartment building on Monday morning.

The roof of the building has collapsed and one firefighter suffered minor injuries, Prince George’s County Fire Chief Ben Barksdale said at a news briefing Monday afternoon. The cause of the fire remains unknown, he said.

PGFD 5 Alarms – 200 Fire/EMS personnel on scene 4+hours operations. One of, if not the, largest fire suppression efforts in County history

Heavy smoke was seen coming from the fifth and sixth floors of the new residential and commercial building, which is located on 4700 Berwyn House Road, according to department spokesman Mark Brady.

Officials responded to the scene at about 10 a.m. Social media posts from the incident show the fire extending to the roof. At about 10:15 a.m., Brady announced the incident was upgraded to a three-alarm fire, which included units such as four engine companies, two ladder companies and three battalion chiefs. By 11:50 a.m., it was upgraded to five alarm status, according to police scanner reports.

Smoke from the fire is affecting parts of the University of Maryland’s campus, and northbound Route 1 is closed from Campus Drive, according to a university alert. This university closed at 1 p.m. on Monday due to “poor air quality from fire near campus,” university President Wallace Loh wrote in a tweet. The University Health Center will remain open until its normal closing time of 6 p.m. on Monday, according to a Facebook post. All university dining halls and shops are operating under normal hours, the Department of Resident Life wrote in a tweet. Stamp Student Union closed at 3 p.m., according to ResLife.

Sophomore aerospace engineering major Darsh Patel, who resides in the University Club — an apartment building adjacent to Fuse 47 — said the smoke was “a lot bigger” on the campus than it was near the scene.

“All the smoke is going and settling over there,” Patel said. “I was taking an exam when this whole thing happened, and my classroom smelled like bonfire and it was very hot.”

Cece Wallerstedt, a sophomore public health major, said she smelled smoke when she left her Terrapin Row apartment. She wasn’t shocked about this university’s closing, she said, but she was surprised at how far-reaching the smoke was.

“We smelled it all the way over there, which is crazy,” she said. “It’s probably a good thing that they canceled classes.”

Prince George’s County Public Schools and offices are operating under normal hours, according to its digital bulletin board.

The building, which contains 275 units, had been scheduled to open sometime in July and would boast high-tech features such as the opportunity for residents to go keyless and have access to a “transit room.”

College Park Mayor Patrick Wojahn said it was a “tragedy” that the apartment complex “has been destroyed just a couple months short of its opening.”

Wojahn said firefighters on the scene told him the building might have to be demolished, though they are uncertain as they still need to assess the damage. As of February, 19 leases had been signed.

“We’re working on getting the fire put out so that the street can re-open,” he said. “Once the street re-opens hopefully later today, then life can go back to normal for people who live in that area. But if there’s a prolonged closure of the street of that area, then we’ll work to meet the needs of the people in that area.”

A phone line for the complex was busy. A message left at a separate complex line was not immediately returned.

The apartments are geared toward young professionals rather than undergraduate students, said Eric Olson, executive director of the College Park City-University Partnership.