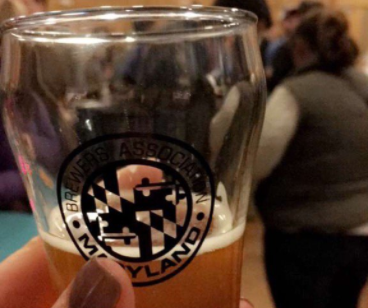 The room is filled with the rich smokiness of Mission BBQ, and craft beer-vangelists sip on gold, copper and amber colored ales while they tease a thick pile of mac and cheese.

This is “Love Thy Beer,” the signature event of the second-annual “FeBREWary,” a celebration of craft brewers from around the state, declared by Gov. Larry Hogan. Throughout “FeBREWary,” brewers host events, create special brews and connect with the people who support them to celebrate Maryland Craft Beer Lovers Month.

Latte milk, espresso, tiramisu, raspberry chocolate, hazelnut coffee: These are not on the dessert menu for a Valentine’s Day prix fixe, but the flavors of “FeBREWary.” Brewers were asked to create a specific February-themed beer to compete for the best brew in the “Cupid’s Curse” competition. At Love Thy Beer, excited imbibers lined up to try the aphrodisiac-filled, chocolate, coffee and even rosehip-flavored beers that lined the halls of the Silver Spring Civic Center, where the event was held.

“The main point of [FeBREWary] is to shine light on the industry and bring people out to the breweries and out to events during a time of the year that they normally wouldn’t,” said Callie Pfeiffer, marketing coordinator at the Brewers Association of Maryland. “We want to bring them out to the breweries just as much as they would in the summertime, or any other time in the fall, festival season.”

The Maryland Office of Tourism and the Brewers Association of Maryland, a nonprofit trade association that works to grow and promote the craft beer industry in Maryland, sponsored the event, which featured more than 20 breweries.

“They’re our voice,” said Michael Piorunski, a brewer at Evolution Craft Brewers, “What we do here is bring our beer and showcase what craft brewers do in different communities across Maryland.” Evolution has been a member of the Brewers Association of Maryland since 2012.

The event was also sponsored by Grow & Fortify, a management group for the Brewers Association of Maryland that works with breweries, wineries and distilleries in the state.

Growth & Fortify educates and advocates in the drink industry and works in Annapolis to get favorable bills for the craft beverage industry passed. They use events like “FeBREWary” to bring awareness to legislators about what is important to brewers, and to help brewers connect with customers.

Pfeiffer said having the support of Hogan has been a huge help in raising awareness about the craft beer scene in Maryland, which now boasts more than 70 breweries. “To have him write up a proclamation specifically for this month, it meant so much to us because it’s helped to get a lot of legislative people to maybe take a second look and understand more what we’re trying to do,” she said.

Breweries like the ones at Love Thy Beer have helped attract more tourists and revenue for Maryland, according to a report the Maryland Office of Tourism Development released in January. Visitors to the state spent almost $17 billion on travel expenses in 2015, up 3.5 percent from the previous year, the report stated. The increase in offerings with new restaurants, breweries, distilleries and wineries has helped to bring this increase, according to Liz Fitzsimmons, executive director of Maryland’s Office of Tourism Development.

Though the breweries have been drawing increasing numbers of out-of-state visitors, the event teemed with local craft-brew lovers drinking, eating and enjoying blues music.

“The vibe is very uplifting,” Piorunski said. “People are excited they just got off work; this is like the best happy hour in Silver Spring right now.”

For Baltimorean Christy Moore, events like Love Thy Beer are a great way for avid local beer drinkers like herself to try the beers of many Maryland breweries at once.

“They’re all so spread out across the state and right here they’re all in one place,” she said. “It’s supporting buy local. The small guys that are doing what they love and you’re supporting them. It’s like buying local with anything. Keeping it in the community, keeping it in our state, it’s a good thing.”

Buying local is certainly a good thing for people like Kristina Miedzinski of Manor Hill Brewing, who works hard to get her brewery’s name and special beers out into the community. Miedzinski, who has lived in Maryland her whole life, said events like this let people know that Maryland has decent craft breweries you can come visit and try new, intricate brews.

“Having this gets people out and about and seeing that there’s more to beer than just macrobreweries for cheap. If you spend a couple extra bucks, you’ll get really good beer,” she said.