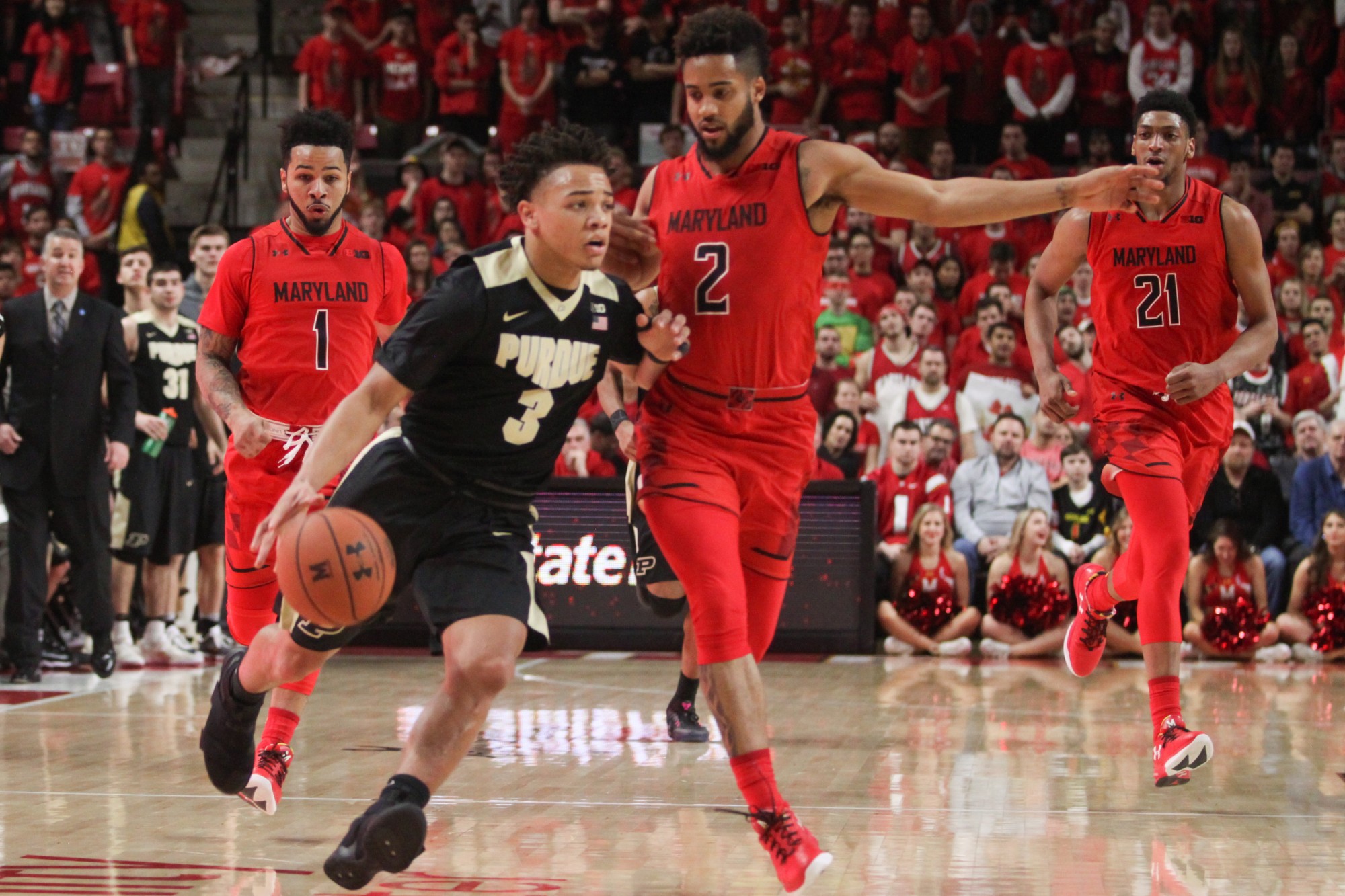 A lot has been made of the Maryland men’s basketball team being the only AP top 25 team yet to play a ranked squad this season. The No. 17 Terps’ 20-2 record entering a home tilt against Purdue carried some weight, as did being one of two Division I programs without a loss away from home.

But without the Terps competing against the country’s best programs, national pundits have been hesitant to confirm coach Mark Turgeon’s squad’s legitimacy, both as a Big Ten and NCAA tournament contender.

And after Purdue guard Carsen Edwards put his team ahead on two foul shots with 2.1 seconds to play — the final points in the Terps’ 73-72 defeat — those outlets are still left to wonder where this team falls in the national landscape. All-American candidate Caleb Swanigan dominated inside, finishing with 26 points and 10 rebounds as the No. 23 Boilermakers snapped the Terps’ seven-game winning streak.

“I thought we were going to win,” coach Mark Turgeon said. “I think everybody did. We just didn’t get it done. With 6.5 [seconds], we needed to get a stop, and we didn’t get it.”

Before Edwards’ heroics, guard Melo Trimble possessed the ball with a chance to ice the game like he’s done in so many instances throughout his two-plus-year career. While he hasn’t had the same success getting to the foul line this season, he did so at will in the second half Saturday. He went up for layups to the tune of the referee’s whistle and then converted his freebies, making 14 of his 15 attempts during the frame.

But with 16 seconds to play, Trimble opted to pull up for a short jumper and left it short, setting up Edwards’ free throws after Justin Jackson fouled him in the waning moments.

Maryland had two chances to steal back the victory, the second of which came with 0.5 seconds to play. After the Terps’ overthrew the inbounds pass past halfcourt, Purdue center Isaac Haas traveled before the final buzzer sounded. Guard Kevin Huerter had a quality look from three-point range from the right corner, but what would have been his fourth long ball of the game clanged off the rim, prompting the freshman to slam his fist on a chair at the Maryland bench.

The Terps did not make a basket in the final seven minutes and 37 seconds.

“It definitely was an opportunity, but I think there’s going to be a lot more opportunities coming up,” Huerter said. “It would have been a good win to get the win in front of the home crowd and kind of get some respect behind our name.”

After missing his first four shots, Trimble paced the Terps (20-3, 8-2 Big Ten) with 22 points, while Huerter (11) and forward Michal Cekovsky (10) joined him in double figures. Turgeon lauded his frontcourt’s performance on Swanigan despite his double-double performance on 9 of 19 shooting for Purdue (19-5, 8-3).

The Terps and Boilermakers entered Saturday as the top two 3-point shooting teams in the Big Ten during conference play, but the squads combined to shoot 5 of 18 from behind the arc in the first half. Turgeon’s team combated these shooting woes with a balanced scoring attack. For Purdue, Edwards and Swanigan carried the offense by getting into the paint. The result was a back-and-forth opening period, with the Terps holding a 36-34 advantage at the break.

At the 13:47 mark, Huerter’s emphatic one-handed slam off Cekovsky’s circus pass put Maryland up 12 and brought the noise level at Xfinity Center to a peak, prompting Purdue coach Matt Painter to call a timeout. The arena calmed after the break, but the Boilermakers didn’t score for another minute and a half.

To Painter, there stood an opportunity for Maryland to put the game out of reach. The Boilermakers allowed Huerter and Trimble wide-open looks from long range. Forward Damonte Dodd had a point-blank layup.

All of those attempts went awry, and Purdue hit back-to-back 3-pointers that brought the game within two possessions. The makes were part of an 11-0 run that brought the Boilermakers within one. Neither team led by five the rest of the contest.

“When we were getting into transition, we just weren’t making good decisions,” Dodd said. “We just didn’t take good shots.”

Maryland caught a break up one with 56 seconds to play when Swanigan drew his fifth foul after hacking Trimble at the rim. As the sophomore walked to the bench, many of the 17,950 fans waved goodbye to the Boilermakers’ best player as Trimble approached the foul line. After tormenting the Terps all afternoon, Swanigan had to watch the deciding moments from the sidelines.

But Purdue didn’t need Swanigan to prevent Maryland from earning its signature victory. Turgeon wanted to win the game on defense, but his players couldn’t get a stop. So after a series of close triumphs this year, they walked towards the locker room in silence after a rare defeat.

“They’re hurting right now because we played well enough to win,” Turgeon said. “We were one possession away.”