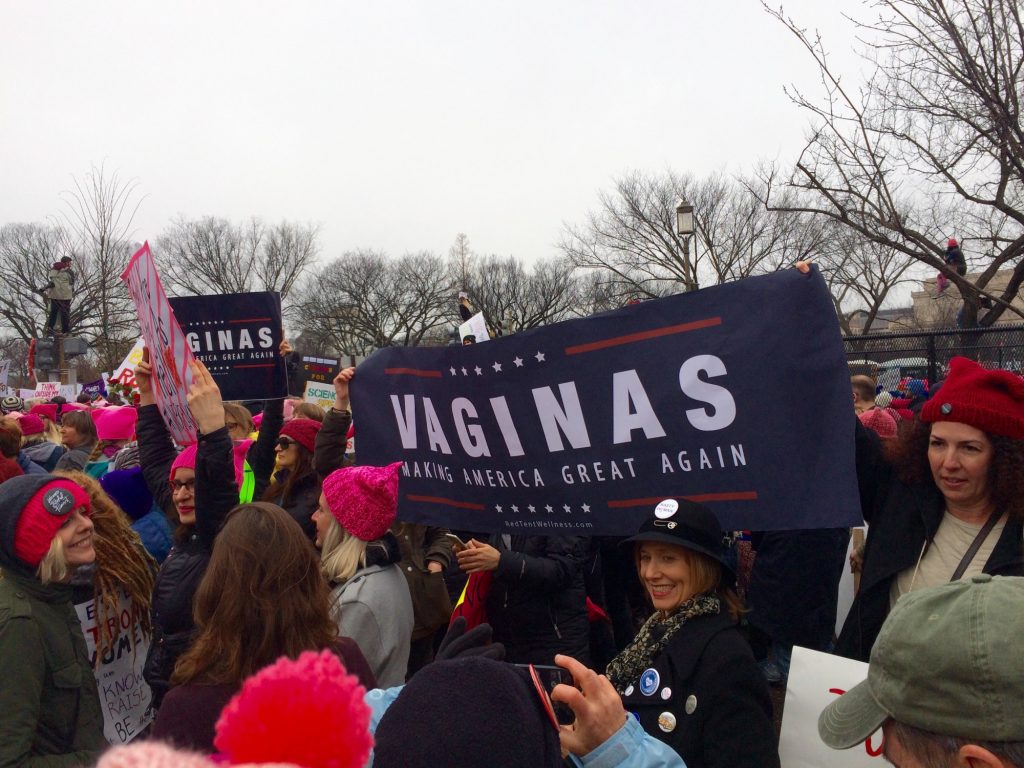 If Corri Wilkinson hadn’t marched Saturday, she wouldn’t have been able to look her younger sister in the eyes.

Wilkinson’s sister, a childhood victim of sexual assault and a high school student, struggles to come to terms with a school environment that has become a breeding ground for jokes about mistreatment of women. Jokes that Wilkinson, a senior at the University of Maryland, said have been “validated” by President Donald Trump’s demeaning statements about women, exemplified in a 2005 Access Hollywood tape.

“To sit there and not have any response to the things that [Trump]’s said about women and the things he’s done to women … to know that I didn’t stand up for her wouldn’t be something I could do,” said Wilkinson, a psychology major.

Wilkinson and other university students joined about 500,000 protestors — well past organizers’ original permit for a crowd of 200,000 — who took to the streets of Washington the day after Trump’s inauguration for the Women’s March, a grassroots women’s rights movement that spread globally following Trump’s unprecedented election in November. The march grew to encompass any issue perceived as a threat to human rights, ranging from immigrant protection to climate change.

The event’s rally featured keynote speakers such as activist Gloria Steinem, musician Alicia Keys and actress Ashley Judd, who called on women to embrace being “nasty,” a word Trump employed during his campaign to describe Democratic presidential candidate Hillary Clinton. The stand in solidarity crisscrossed the nation in hundreds of cities, mobilizing an estimated 750,000 marchers in Los Angeles, more than 400,000 in New York and up to 175,000 in Boston. No arrests were reported, according to D.C. police.

The intended march route in Washington was so packed that the marching segment of the event was canceled, leading protestors to stall before many congregated near the National Mall.

“It’s more than I pictured,” said senior English major Cassie Osvatics, pancaked between the marchers around her. “When we were marching [to the rally] from Mount Vernon Square down to here … being able to see all those people in the distance was moving, and beautiful to me.”

While some had marked their calendars months in advance, others’ resolve to attend the march hadn’t been set in stone. Gathered with other university students Saturday morning, Mayah Lovell said she had battled internally on whether to take part in the historic event.

“Growing up, I’ve always been aware of the problems of intersectionality and how being [Afro-Latina] and also being a woman and also being gay and also being poor and other different things can have many effects,” said Lovell, a senior cell biology and genetics major at this university. “It’s different when you’re marching around with a bunch of people that didn’t really see anything until this guy Trump came along.”

One of the things that finally drove her out of bed that morning, however, was a feeling of responsibility to keep pushing progress forward.

“[Trump’s election] hurt, but it just hurt the same way it always hurts,” she said. “… It’s nothing new to me, but for a lot of these people, it’s new to them, and that’s great — for people to be aware of what’s going on.” 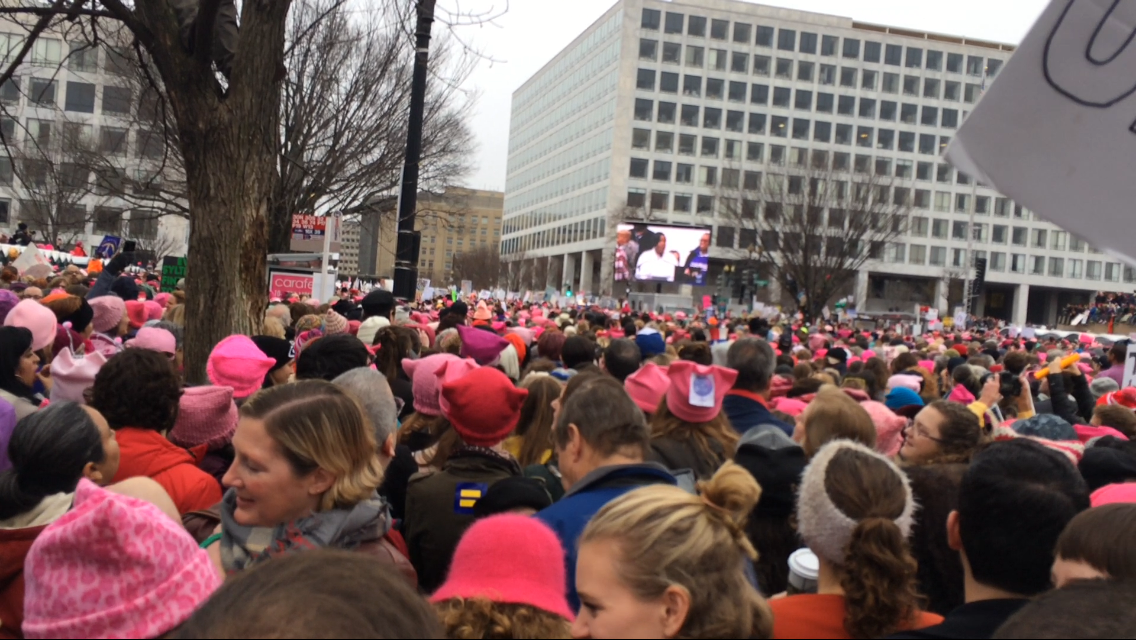 As the hundreds of thousands of women swarmed the nation’s capital, thousands of husbands, brothers, sons and friends joined them. Steffen Pollock drove seven hours from Rochester, New York, Friday night to meet up with friends from this university for the march.

Walking to the Metro at 8 a.m. in the College Park suburbs, Pollock’s bright pink “pussyhat” — coined after Trump’s comment about grabbing women “by the pussy” — stuck out like a sore thumb. An hour later on Independence Avenue, it would disappear into a sea of others.

“As a man or as a male, it’s important to come out and support women,” said Pollock, a second-year student currently in transition between schools. “I have sisters, I have a mother, I have a lot of female friends, and a lot of them are really invested in not just this march, but in general, invested in protecting and defending their own rights under Trump.”

At the core, many marchers held fast to a certain hesitant optimism — a hope also infused with uncertainty and anger.

Senior physiology and neurobiology major Tiffany Hu said she was marching in part to give voice to the single mothers she’d worked with between 2014 and 2016 through a Health Leads partnership with this university and Children’s National Medical Center. Many of these women rely heavily on the Affordable Care Act, which Trump is set on dissolving, Hu said.

“I got to hear the stories of so many powerful and amazing clients that I had, mostly women, who really just don’t have a voice and can’t do anything about their situation,” said Hu, who also serves as co-president of this university’s American Medical Student Association chapter. “There’s a stereotype against their situation — for being poor, for being single mothers.”

Vanessa Ramirez (right) holds a sign, “Build Communities Not Walls,” at the Women’s March. In addition to concerns about the ACA being repealed, Ramirez also worries about family members and friends who could be impacted by stricter immigration policies. (Taylor Swaak/ The Diamondback)

For Vanessa Ramirez of Tempe, Arizona, Trump’s executive order Friday to begin rolling back the ACA put her future in limbo. After being diagnosed with cancer 12 years ago at age 23, Ramirez has depended on the ACA, which offers services such as cost assistance with health insurance and expansion of Medicaid eligibility.

“The fact that this administration wants to repeal and replace [the ACA], but they don’t have anything to replace it with, that scares me, because right now I am a recipient of [it],” she said.

The ACA, also known as Obamacare, went into effect in 2010 and serves more than 20 million Americans — many of whom are from lower income brackets. The ACA’s services, along with those of Planned Parenthood, have benefited people in towns like College Park, where a majority of residents are college students, said city Mayor Patrick Wojahn, who also marched Saturday.

“I’ve met people who rely on the ACA, and I think that in College Park especially, the ability to be on the parents’ health insurance until you turn [26] has been especially important … and a lot of people rely on that when they’re in college and after they graduate,” he said. “Many people are struggling to find employment that offers health insurance, even after they graduate college.”

Another concern that exists among community members is Trump’s campaign promise to federally defund Planned Parenthood, which provides women with “a power” over their reproductive health and family planning, Wojahn added.

While uncertainty coupled with a need for answers drove Ramirez to the march, her best friend Tiana Silvas’ trip from New York to Washington was inspired by outrage, and a passion for education.

“As an educator, we’re completely enraged about the possible future of educational policies coming down, especially with the potential secretary of education, who’s never really set foot in a classroom,” Silvas said. “Education is important; it’s a foundation of this country and it’s something you can’t oppress.”

Trump selected businesswoman and education activist Betsy DeVos in November as his nominee for education secretary, drawing criticism from liberal groups that the appointment is an effort to privatize education. DeVos has promoted charter schools and school vouchers in the past, and lawmakers raised concerns regarding her lack of experience during her confirmation hearings.

Although Shannon Vingo, Terps For Trump’s secretary, said she and the group as a whole are “very accepting of free speech and demonstration,” she added that she hopes Trump is given a chance to prove himself as a leader.

“I saw this little quote on Facebook — ‘When you’re all on the plane, why would you wish for the pilot to fail?'” said Vingo, a senior economics major. “I’m optimistic, and I’m excited to see what happens, and I hope he does a great job, because if he does, that means great things for America.”

As the first school semester under Trump’s administration begins, Student Government Association President Katherine Swanson, a senior government and politics major who was at the march in Washington, said the SGA plans to pass a bill backing this university’s sanctuary campus designation within the first two meetings. It also intends to vote in favor of a University of Michigan SGA bill supporting DACA during a Big Ten conference with other student governments at Ohio State University next month.

The SGA had proposed an annual student fee last semester to raise about $1 million for this university’s underfunded Title IX office, which handles sexual assault misconduct cases. Swanson also recently signed an open letter to Trump from students around the country, urging the commander-in-chief to “uphold and continue DACA, H-1B visas, and visas for international students generally—including for Muslim students.”

“I’ll do everything I can in the remainder of my term to protect [minority students], and if there’s something that I’m not doing that they want to see, I need to know that,” she said. “My door is always open.”

Tina and B Millner of Richmond, Virginia, at the Women’s March on Saturday. (Taylor Swaak/ The Diamondback)

In the face of recent events, Tina Millner, from Richmond, Virginia, said she was amazed at the support and thoughtfulness that surrounded her — “even in the tightest of binds.”

Sitting with her husband on the side steps of the Smithsonian National Air and Space Museum wearing a “Respect” sign around her neck, she emphasized the importance of kindness.

“Coming in on the [Metro], people were packed,” Millner said. “One of the subway attendants said, ‘Okay everybody, love each other. Push closer together.'”

On an overflowing Metro car leading to the march, a nearby voice was already calling for just that.

“We’ll be back. This is only the first.”