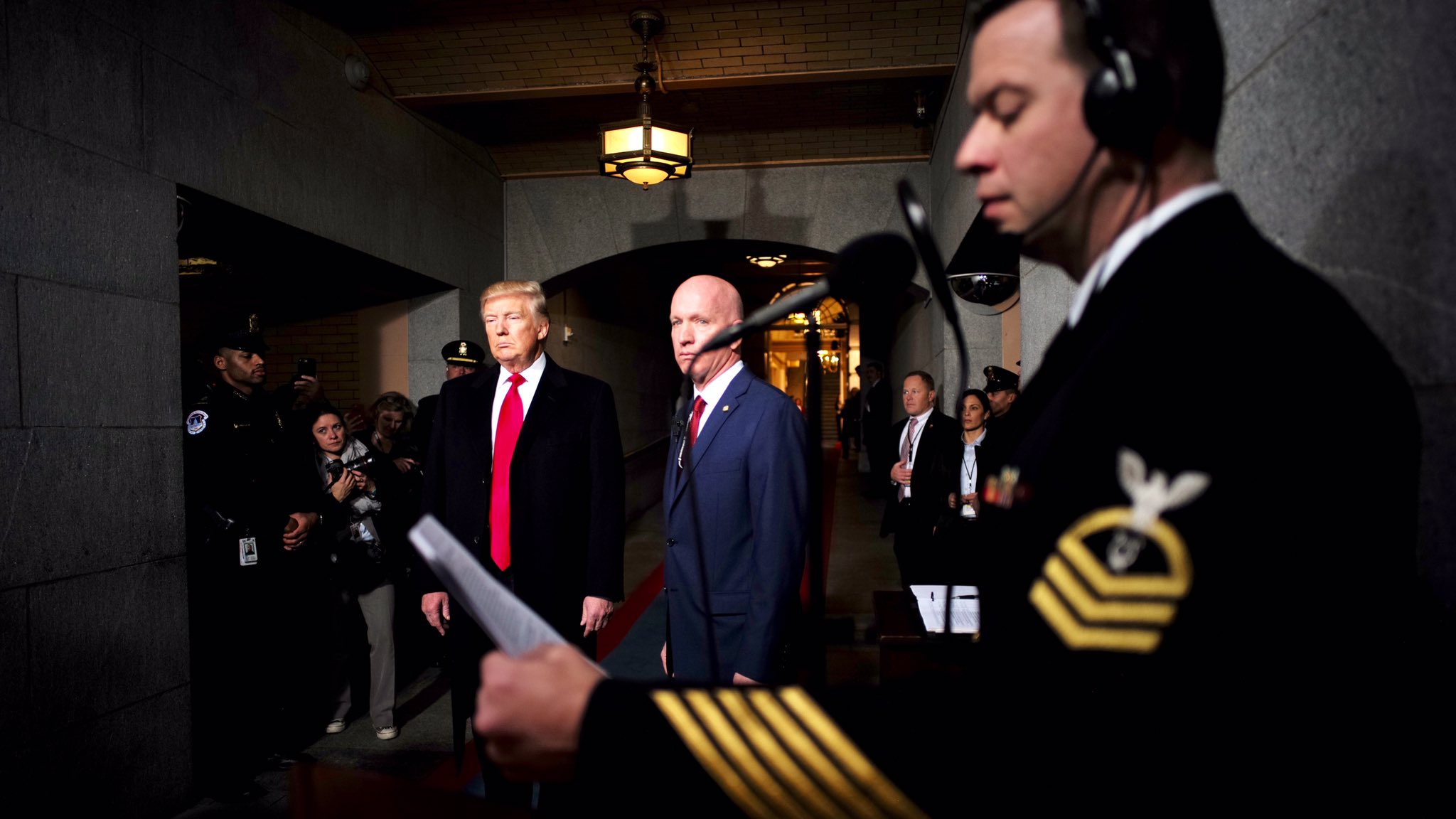 In a historic ceremony under an umbrella of cloudy skies, Donald Trump was sworn in Friday as the 45th president of the United States.

The 70-year-old businessman and former television personality on “The Apprentice” is now commander-in-chief, chief executive and head of state in a GOP-controlled Congress. He is the first president in U.S. history with no previous government or military experience, and he is also the oldest president to assume office.

After being sworn in by Chief Justice John Roberts at about noon, Trump delivered his inauguration speech, giving his signature thumbs up before thanking the American people.

“Together, we will determine the course of America and the world for many, many years to come. We will face challenges, we will confront hardships, but we will get the job done,” Trump told hundreds of thousands of onlookers, many of whom donned red hats that read “Make America Great Again.” “From this day forward, it’s going to be only America first.”

In the 15-minute speech, Trump said his inauguration marked the beginning of a more notable transfer of power than from one administration to another — a transition that would allow Americans to become the nation’s leaders. In the past, “the establishment protected itself, but not the citizens of our country,” he said.

“What truly matters is not which party controls our government, but whether our government is controlled by the people,” he said. “Jan. 20, 2017 will be remembered as the day the people became the rulers of this nation again.”

Trump also vowed in his speech to rebuild the nation, end “American carnage” and “eradicate Islamic terrorism from the face of the earth.” He emphasized protecting the country’s borders — largely through the creation of a wall between the U.S. and Mexico — restoring wealth back to U.S. citizens and following two rules: “Buy American and hire American.”

While Trump pledged to also eliminate disease, his speech did not mention health care, a key element throughout his campaign.

Trump has repeatedly promised to repeal and replace former President Barack Obama’s Affordable Care Act. The U.S. House of Representatives passed a measure Jan. 13 to start dismantling the ACA, and the U.S. Senate passed the same measure a day earlier. Republicans must now find a replacement for the 2010 health care law.

While thousands turned out for Trump’s inauguration — including Maryland District 5 Rep. Steny Hoyer, who said this week he supports a “peaceful transition of power” — the unprecedented and divisive election that handed Trump the presidency left many Washington lawmakers frustrated. At least one-third of House Democrats chose not to attend, including politicians from this state. Reps. Jamie Raskin and Anthony Brown were among those who skipped the festivities.

Public transportation into Washington also paled in comparison to Obama’s inauguration. Metro ridership Friday morning was lower than the past three presidential inaugurations, according to The Washington Post.

And some of the attendees who traveled to Washington on Friday came not in support of Trump’s presidency, but in protest. Protestors smashed windows and blocked traffic, leading police to use tear gas and stun grenades in response. At least 95 people were arrested in Washington as of 2 p.m., according to CNN.

Despite the existing divide splintering the country, Trump expressed faith during his speech in shared American spirit that brings citizens together.

“A new national pride will stir ourselves, lift our sights and heal our divisions,” Trump said. “Whether we are black or brown or white, we all bleed the same red blood of patriots.”

Standing on the steps of the Capitol, as small raindrops landed on his black coat, Trump ended his speech with the campaign slogan that led him to the White House: “Together, we will make America great again.”