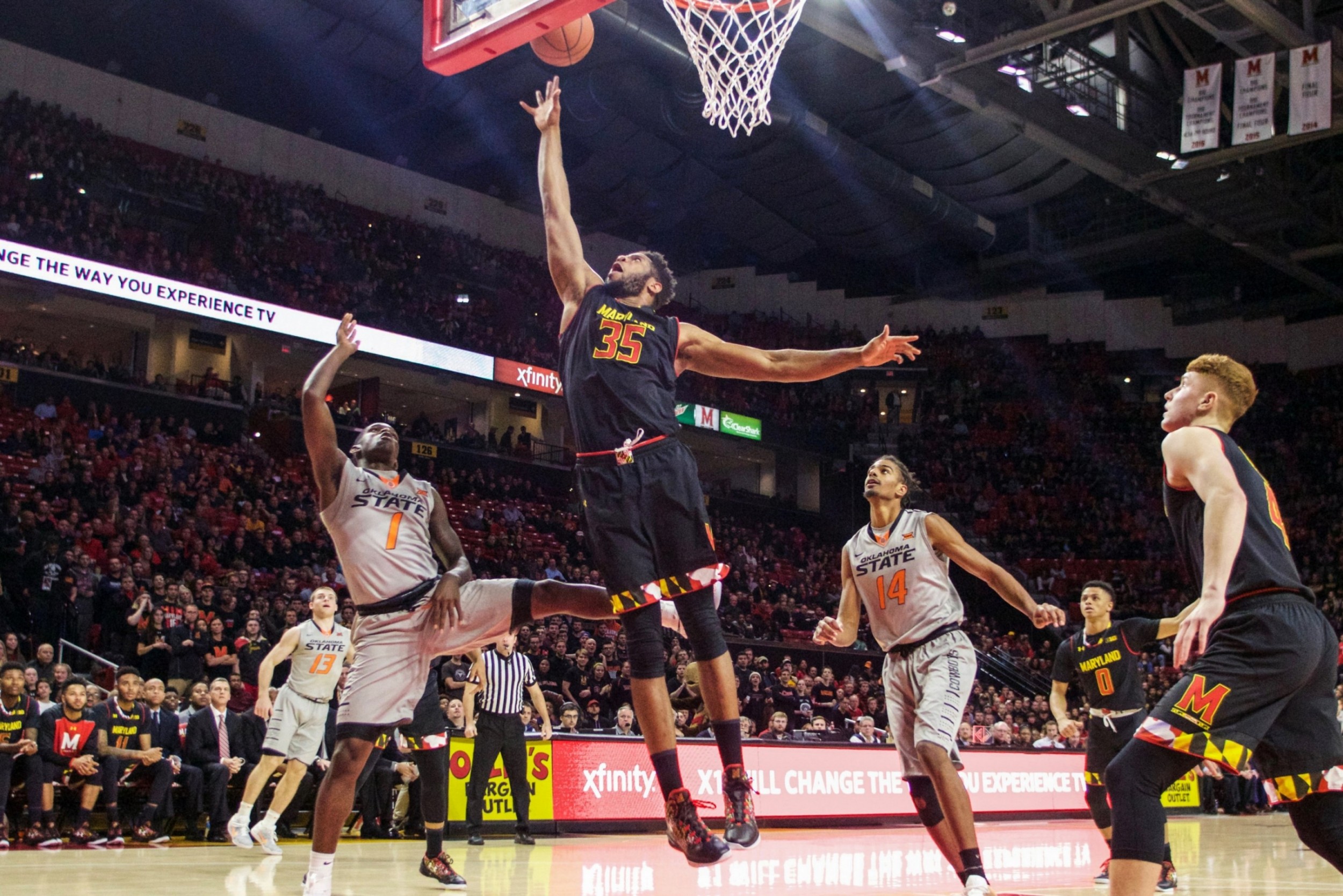 The ESPN producers labeled the play “OG OH MY,” and it was No. 3 on SportsCenter’s Top 10 soon after the Maryland men’s basketball team secured a 75-72 home win over Indiana on Tuesday night.

With the Terps up three with about 10 seconds to play, Indiana forward OG Anunoby blew past a defender on the left wing, dribbled twice and then took flight. Forward Damonte Dodd, who was standing in the paint, went up for his seventh block of the game. Instead, he ended up on the wrong side of the 6-foot-8 sophomore’s emphatic slam.

The dunk fired up Indiana but wasn’t enough to help it avoid their fourth loss in five games. Guard Melo Trimble followed the jam with a pair of free throws to put Maryland up three, and guard Robert Johnson missed the game-tying three-point attempt on the Hoosiers’ final possession, sealing the Terps’ victory.

After the win, Dodd joked on Twitter about the posterizing moment.

Maryland’s starting center had a good reason to shrug off the play, as the Centreville native scored six points and grabbed six rebounds in the victory. He was even more important on the defensive end, matching his career high with six blocks to keep Indiana’s talented frontcourt from establishing its presence inside.

Monday afternoon, Turgeon spoke about the challenges his team would face against Anunoby and forward Thomas Bryant, a pair of sophomores many pundits project to go in the 2017 NBA Draft’s first round. The players average double figures for the Big Ten’s highest scoring team (85.1 points per game). They also average at least 5.8 boards, a large reason Indiana is No. 4 in the nation in rebounding margin.

“All of their bigs are tough for us,” Turgeon said. “They’re big, strong, athletic, fast, so it’s a huge challenge for our post players.”

Plus, the Terps were without forward Michal Cekovsky, who missed his fourth consecutive game with a left ankle injury. Turgeon pegged Cekovsky as a “game-time decision” Monday, but the 7-foot-1, 250-pound junior walked onto the Xfinity Center floor wearing sweatpants and a walking boot. Dodd, still recovering from a sprained MCL that forced him to sit five games, made his second straight start.

Dodd acknowledged Bryant would get the best of him at times — “he’s probably going to get his,” Dodd said Monday — so he focused on making him uncomfortable down low and forcing him into tough looks.

Thomas, a “beast” and a “load,” according to Turgeon, finished with as many points as Dodd had swats, making 2 of his 8 shots to tie his lowest scoring total of the season.

Dodd established his paint presence early, blocking his first shot less than four minutes into the game. He added two more before the halfway mark of the opening frame. At halftime, with Maryland holding a 39-38 lead, Dodd already had five rejections.

After the game, Indiana coach Tom Crean praised Dodd’s play on the offensive end, calling him the best screen-and-roll player in the Big Ten. He created space when he cut to the hoop, Crean said, which allowed more room for Trimble and freshman guard Anthony Cowan, who combined to score 33 points despite making just one 3-pointer.

The guards fed Dodd, too, as he scored his six points via a dunk, layup and two foul shots. It marked his third straight game scoring at least six points, which included a 15-point performance in Maryland’s 77-70 win at Michigan on Saturday.

Still, Dodd has made much of his contributions this season on defense, and he proved that again with Maryland up, 73-70, with less than a minute to play. After receiving the ball in the post, Bryant faced up and drove baseline. He went under the basketball before attempting the layup, but Dodd was there, blocking his sixth shot and grabbing his sixth rebound with the Terps still ahead.

“He’s getting better and better all the time,” Crean said. “He’s in such better shape. They’ve done a great job building him up, and he totally plays his role.”

It was that sequence, not the one on Indiana’s next possession, that represented what Dodd meant to his team Tuesday night. 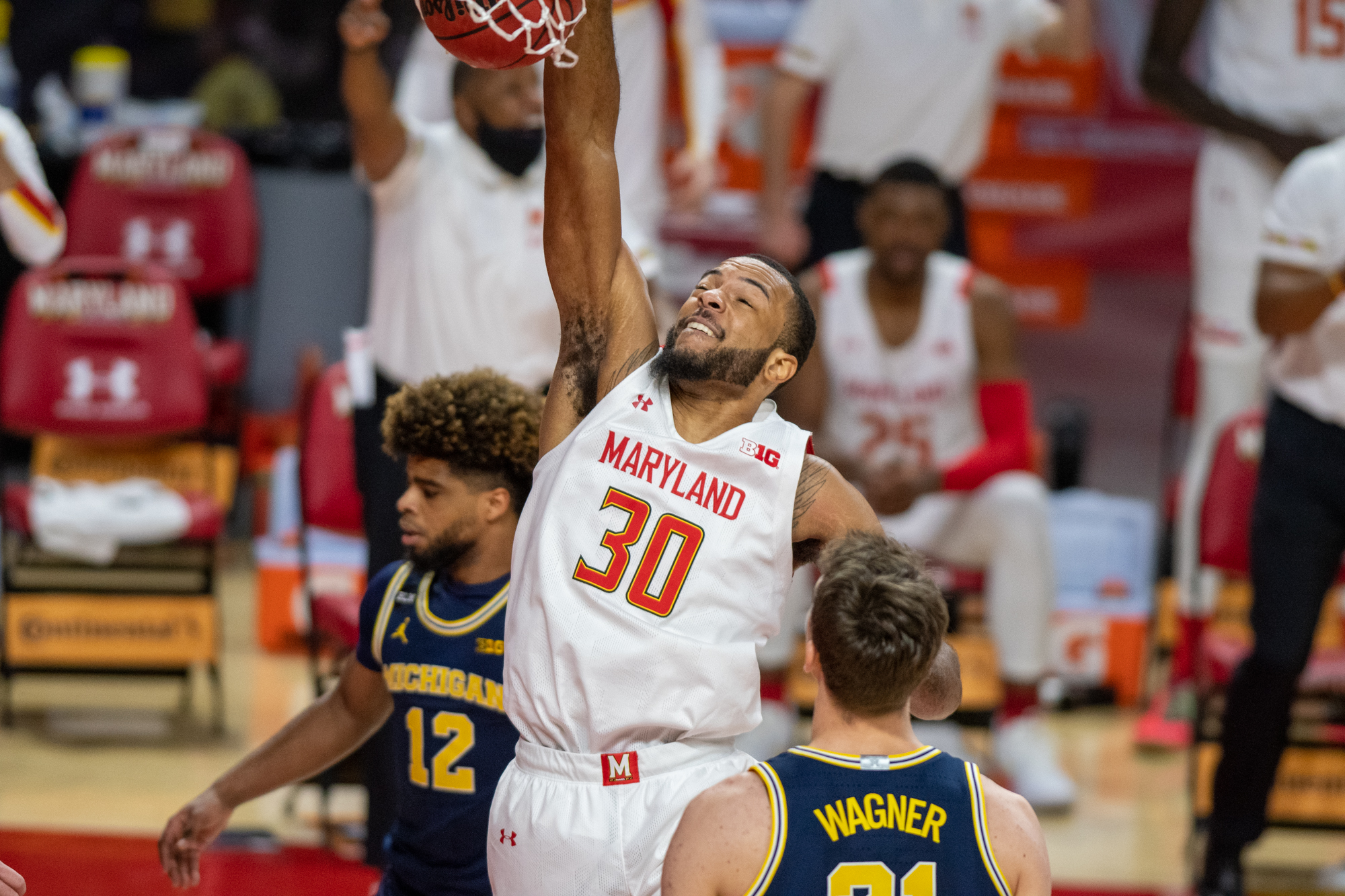