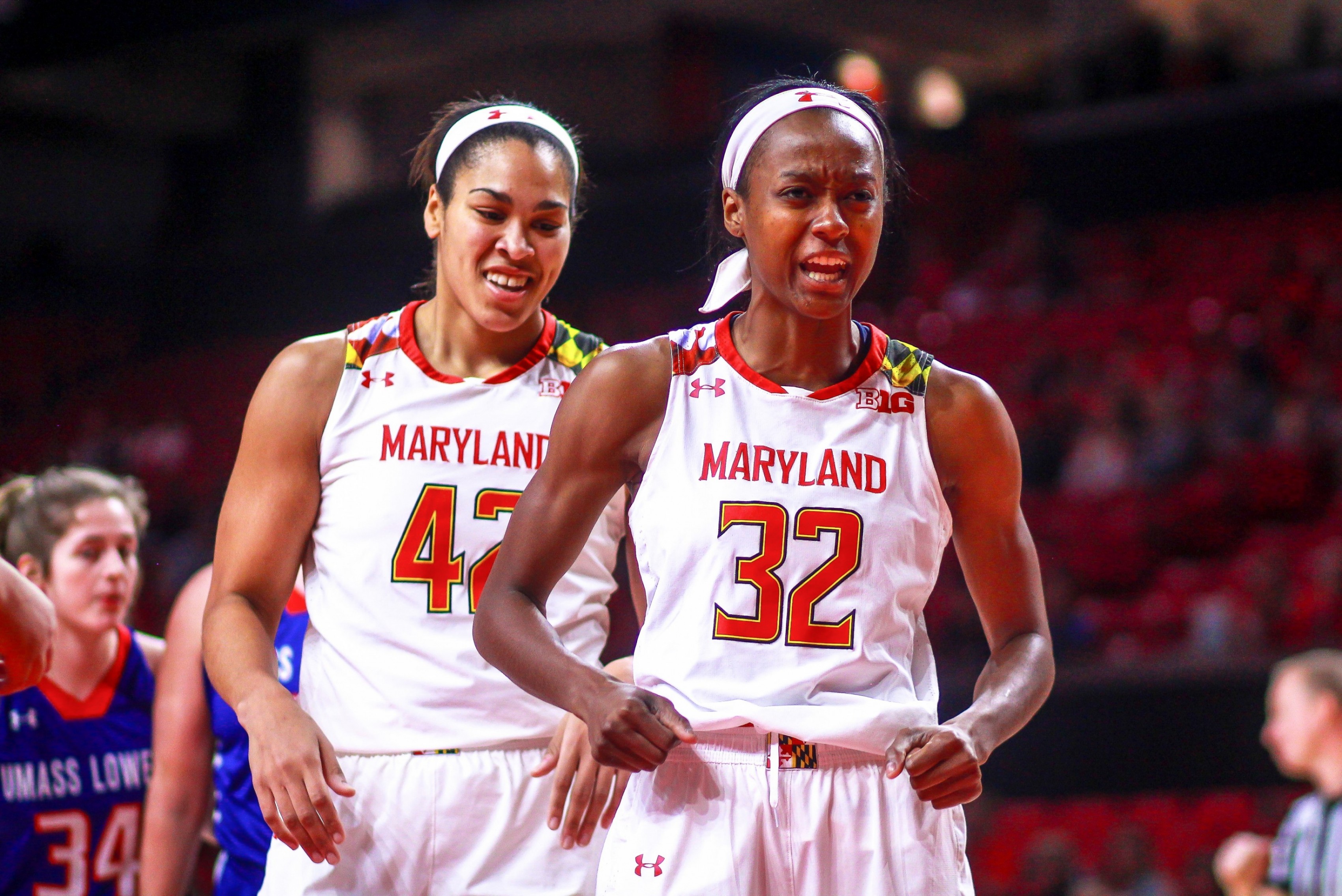 And as the Wildcats learned, if the Terps are knocking down shots from outside, it becomes a challenge for opponents to stay within striking distance.

“To be able to have that kind of balanced scoring … is key to our success,” coach Brenda Frese said.

Frese, though, was mostly focused on the other end of the floor.

“We got a lot better today, especially on the defensive end,” Frese said. “That’s something we’ve spent a lot of time talking about.”

Early in Sunday’s game, it seemed those discussions were paying off. Maryland came out firing, forcing turnovers on Northwestern’s first three possessions, which Frese said showed aggression and led to the team’s confidence on offense.

On the Terps’ first three possessions, they fed Jones inside. The Havre de Grace native had four points and an assist in the first two minutes, giving the Terps a 6-0 lead.

Maryland continued its strong play from there, making 60 percent of its shots in the first quarter, allowing the Wildcats to convert just 22 percent of theirs and finishing the period with a 23-10 lead.

The Terps cooled down some in the second quarter, but they made up for it by going 5-for-10 from beyond the arc. Guard Destiny Slocum provided consecutive 3-pointers, one of which came with her heels nearly out of bounds, showing the range she displayed Dec. 29 against UConn.

“We understand when we play through Bri, it’s actually easier for our perimeter game,” Frese said.

Northwestern, meanwhile, had little success from long-range, making one of its 11 three-point tries. The Terps entered intermission leading, 45-22, but the Wildcats and guard Nia Coffey came alive in the third quarter, scoring more in the period than they did in the first half.

Coffey finished the first half with five points but poured in 17 in the third, bringing her to a game-high 22. Northwestern scored 25 in the frame.

“We wanted to definitely limit her touches and her shot attempts,” guard Shatori Walker-Kimbrough said. “She showed how good she is in the second half, and I thought we got a little bit relaxed. … Looking further, we have to be able to key in on those things on the best players.”

In the first half, another Northwestern guard, Christen Inman, shouldered the offensive load. She scored 11 before halftime, half of the team’s points. The Wildcats’ other leading scorer, guard Ashley Deary, never found a rhythm. She finished with two points, despite averaging more than 10 points a game entering the contest.

“She’s a really good player,” Slocum said of Deary, “but every single day in practice I go against someone … that’s the exact same.”

Even with Coffey’s third-quarter outburst, the Wildcats never got back in the game. Maryland “relaxed” a bit defensively, Walker-Kimbrough said, but stayed tight on offense and had the halftime lead to fall back on. Plus, Coffey fouled out early in the fourth quarter, a testament to the offensive pressure Maryland put on Northwestern all game.

The Terps finished with five players in double figures, led by 18 from Walker-Kimbrough, who hit a trio of 3-pointers. Slocum had 16 points, and Jones had 15 to go with 13 boards.

Meanwhile, guard Kristen Confroy, a three-point specialist who’s had an up-and-down junior season, went 4-for-7 from deep Sunday to rack up 12 points to complement four steals and three assists.

“When we’re really clicking,” Walker-Kimbrough said, “we can be scary.”