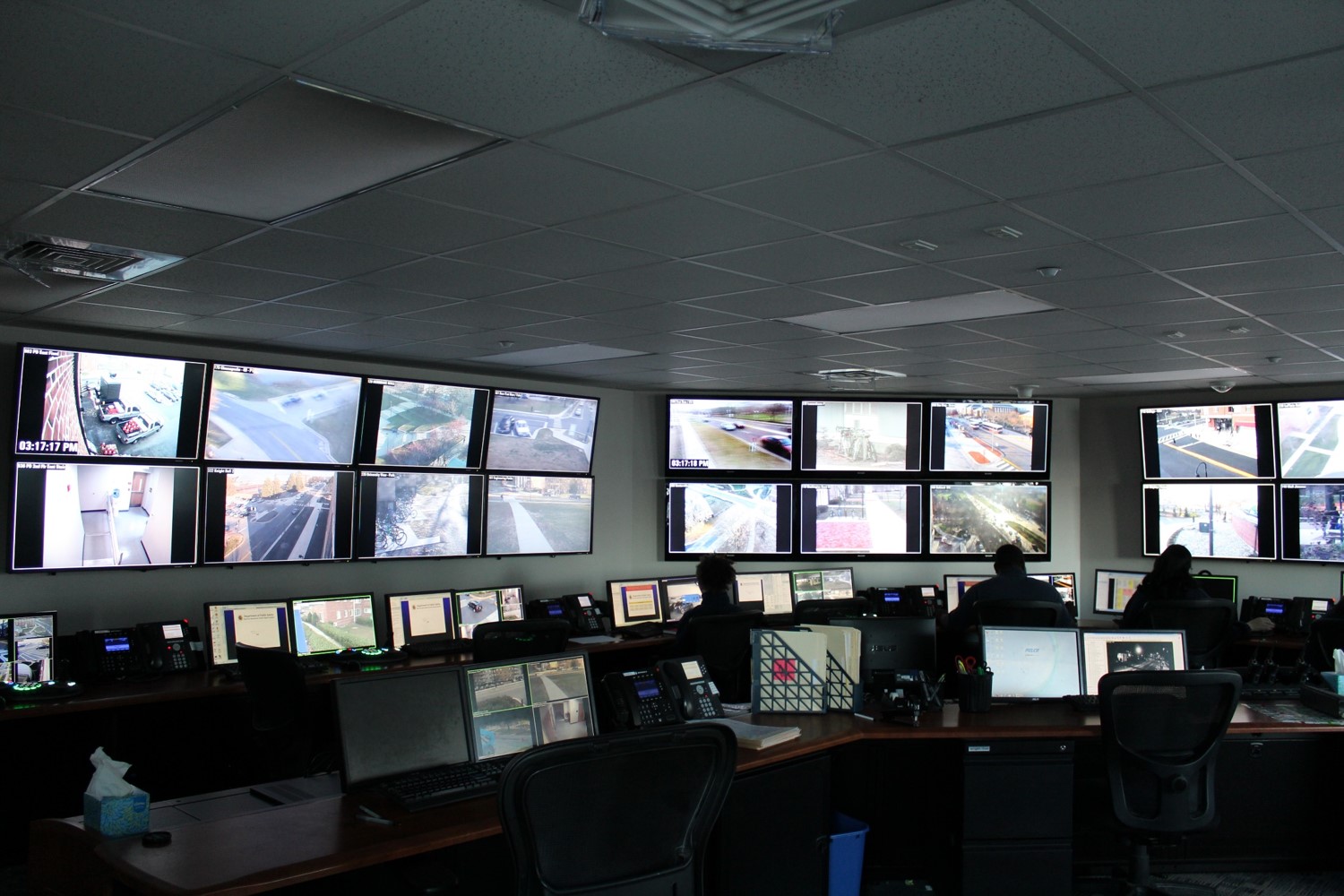 Many students are familiar with the University of Maryland Police and their patrol officers, but fewer know about the department’s unseen eyes and ears that have worked 24/7 for 20 years to ensure their safety.

The Security Operations Center was conceptualized in 1996, when a police employee wanted to install cameras that could be controlled and monitored to aid police in their investigations, said Capt. Joanne Ardovini, who was commander of the center from 2007 to 2014.

The center had relatively quiet beginnings, with just a handful of employees monitoring 25 cameras located around the campus, Ardovini said. At the time, they worked from the basement of the Facilities Management building and were limited in their capabilities. Footage was recorded onto VHS tapes, and because of storage limits, it had a shelf life of just two weeks — exacerbating an already intensive video-review process. Further, an outside contractor located in Baltimore meant that damaged cameras might remain unfixed for long periods of time.

But as technology evolved, the center did as well, and in 2001, the center became more proactive about getting updated technology, Ardovini said. To accommodate this change in mentality, the center was relocated to the third floor of the Pocomoke Building, and the department hired in-house employees who could install cameras and make repairs.

“This allowed us to be not just current, but [also] ahead of things, which helped us prioritize getting things done,” Ardovini said.

In 2011, the center changed locations again, moving to the Severn Building on Greenbelt Road for about two years to allow major renovations to take place in Pocomoke, Ardovini said. After the renovations were completed, the center returned to the third floor of the Pocomoke, where it remains today.

“If you can imagine relocating a technology-based, 24-hour-a-day operation from one location to another, it took a lot of coordination and effort and a lot of people,” Ardovini said. “In each of these moves, there’s an advancement in what we’re able to do for the community and for the department.”

After these renovations, the center now controls and actively monitors more than 400 cameras located on and near the campus, in addition to more than 200 cameras within buildings such as McKeldin Library and Stamp Student Union, said current center Commander Philip Tou.

These new cameras operate on a completely digital platform and have a longer retention time than the old ones — they retain recorded footage for 30 days — allowing the center to keep up with an increased demand for police footage, Ardovini said.

“There were a lot of people that didn’t want cameras back in the day, kind of like this ‘big brother’ thing,” Ardovini said. “But you look at [citizens’] expectations now, it’s like, ‘Where are the cameras? Can you solve that? Can you find out who did that?'”

Answering this onslaught of questions requires center employees to work both reactively and proactively to assist police, Tou said. To ensure this, the center hires various upper-level staff, including a commander, supervisors and a manager. But the true burden falls on the lower-level employees, 45 regular monitors and seven lead monitors — about 80 percent of whom are students at this university, Tou said.

“The folks that do the reviews are the lead monitors, and one of the painstaking things to do with video … you’re pretty much looking at it in real time,” Tou said. “So when you say something happened in an eight-hour block, someone is literally looking at eight hours of video.”

Lead monitors have helped with dozens of major cases that police have handled in past years, Tou said. They assisted police during their investigation of the Pokemon Go-related robberies in July, and in the spring, four lead monitors helped investigators arrest a juvenile connected to more than 30 bike thefts.

“We were able to go back and review all the video in the whole area, and actually provide investigators with a lead that led them to the suspects,” Tou said.

The four lead monitors that helped solve the bike theft case will be recognized by the Governor’s Office of Crime Control & Prevention on Tuesday, he added.

In November, the center helped police apprehend an individual who was trespassing near the public health school, police spokeswoman Sgt. Rosanne Hoaas said. Although the suspect fled when police arrived, they were able to keep track of his location, thanks to the center.

“The cameras were actually guiding the officer and following this individual’s path of travel until an apprehension was made,” Hoaas said. “When an officer’s calling out on a scene of something, especially if an individual starts running on us, our monitors are very quick to keep [officers] updated as to where [the suspect] is at.”

Any university student is eligible to work as a monitor or lead monitor for the police, but working at the center is unlike most traditional student jobs, Ardovini said. The positions require a 16-hour commitment per week, students cannot do homework during their shifts and they must prove they can be trusted with confidential information.

“Whether they’re helping solve a crime after the fact with video reviews or providing support for officers that are responding to a scene, [center employees] are an integral part of the team in providing the best services we can to our community,” Ardovini said.