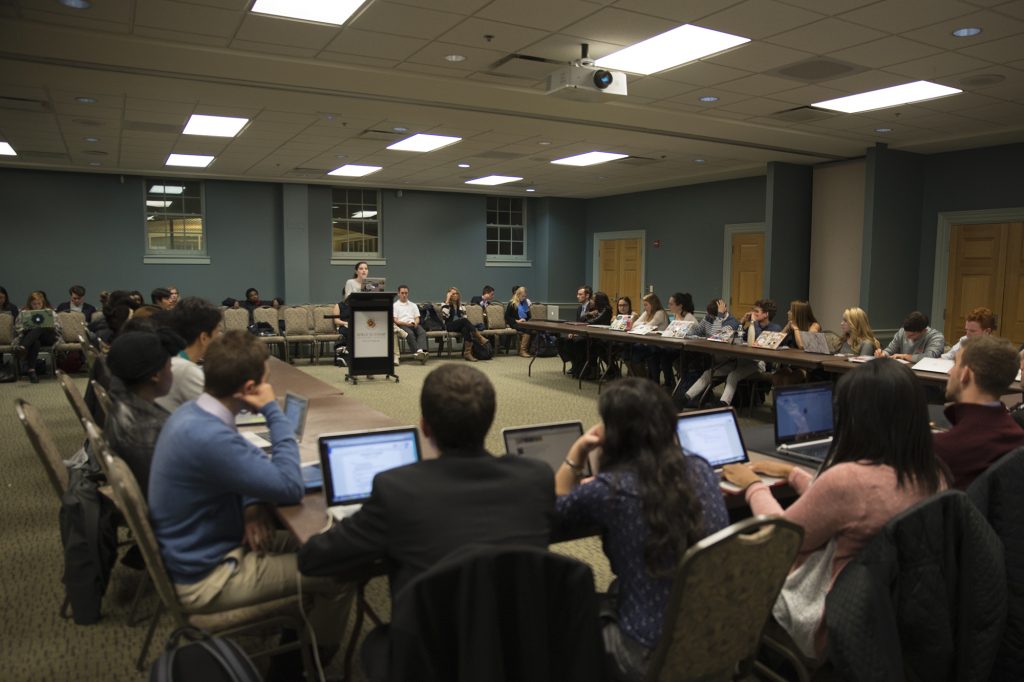 Katherine Swanson, President of the SGA, speaks at the beginning of the meeting.

The SGA executive board is pursuing efforts to make the University of Maryland a “sanctuary campus,” SGA President Katherine Swanson announced at the organization’s meeting Wednesday night.

The bill, which aims to protect undocumented immigrants from federal immigration law or from being deported if they are caught on the campus, is still in its early stages. But the Student Government Association hopes to have it passed this semester, Swanson said.

“I want our campus to be safe for all students, including those that are undocumented,” she said, adding that the policy is one that university President Wallace Loh “has always supported.”

Students at other universities, such as Harvard University and Princeton University, have asked for their respective schools to become sanctuary campuses after Donald Trump won the presidential election last week, according to The Washington Post.

Prince George’s County is one of three areas in Maryland – along with Baltimore City and Montgomery County – that already has laws in place to prevent police officers from looking up a person’s immigration status, according to the Center for Immigration Studies.

Trump has pledged to strip federal funding from all sanctuary cities, according to an announcement he made at the end of October in Gettysburg, Pennsylvania.

“Cities that refuse to cooperate with federal authorities will not receive taxpayer dollars, and we will work with Congress to pass legislation to protect those jurisdictions that do assist federal authorities,” Trump said during a speech made at the end of August in Phoenix, Arizona, shortly after he met with Mexico’s president.

About 300 cities across the country — such as New York, Chicago, Los Angeles and San Francisco — are recognized as sanctuary cities by U.S. Immigration and Customs Enforcement, according to the Center for Immigration Studies.