STACKPOLE: Maryland football should save Perry Hills for Rutgers 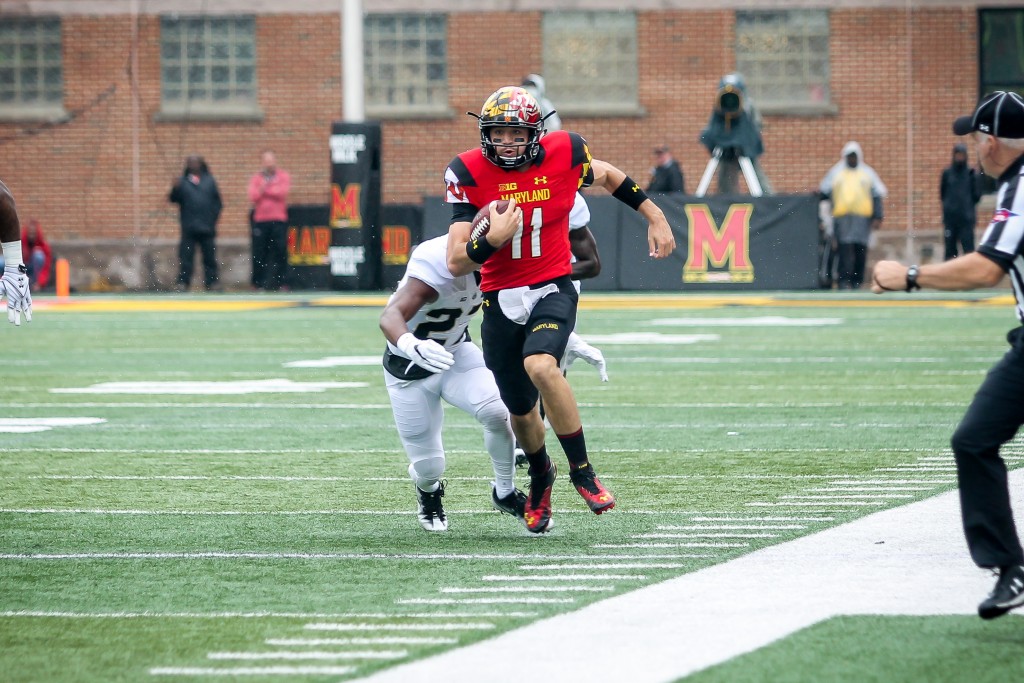 Tell me if you’ve heard this before: Maryland football quarterback Perry Hills is “day-to-day” with an injury to his throwing shoulder.

In the second quarter of the Terps’ 59-3 loss to No. 2 Michigan last weekend, the redshirt senior left the game after taking an uncalled late hit that left him lying on the field at the Big House. Coach DJ Durkin sent a request to the Big Ten for an explanation of what constitutes a late hit, but the damage was already done. The same injury knocked Hills out of the game for the third time this season.

In his weekly conference call Monday, Durkin said he expects Hills to practice this week but didn’t divulge his status for Saturday’s home game against No. 6 Ohio State.

If he can practice, he should. But even if he’s healthy, there’s no sense playing Hills against the Buckeyes or a week later against No. 21 Nebraska. The Terps’ bowl chances will likely ride on their result against Rutgers in the season finale, which is the next time Hills should see the playing field.

Durkin won’t implement my suggestion. He said so at his press conference in Tyser Tower on Tuesday afternoon.

Hills has had the best statistical season of his career in first-year offensive coordinator Walt Bell’s up-tempo scheme. A year after throwing eight touchdowns and 13 interceptions in eight starts, he’s thrown for 10 scores and three picks in that span in 2016. The Terps are on the verge of making a bowl game after last season’s 3-9 campaign, and Hills’ improved play has played a big role in that.

But whether Hills plays or not, Maryland (5-4, 2-4 Big Ten) will not clinch postseason eligibility against Ohio State (8-1, 5-1), a legitimate College Football Playoff contender. Oddsmakers have the Buckeyes at about 29-point favorites. The Terps were 31-point underdogs last week against Michigan. The Wolverines won by 56.

“We have to be ready for whoever plays because at the end of the day, it doesn’t matter who goes out there,” wide receiver Levern Jacobs said. “Ohio State is not going to care.”

Nebraska dropped outside the top 20 after last week’s blowout loss to Ohio State, but a trip to Lincoln seems like a challenging task for a team that’s surrendered more than 650 yards the past two games.

By sitting out those games, Hills will likely be at full strength for the Terps’ Nov. 26 tilt with Rutgers, which is 0-6 in Big Ten play. If he plays before then and gets hurt again — a possibility given how often he runs the ball — he may not be available to face the Scarlet Knights defense that’s allowed 445 yards a game this season.

That’s not to say quarterbacks Tyrrell Pigrome and Caleb Rowe can’t lead the Terps past Rutgers. The former has shown big-play flashes during his freshman campaign (see Maryland’s double-overtime win over Central Florida). The latter, despite throwing two interceptions against Michigan, is a redshirt senior. Plus, he’s proven throughout his career he can win games as the starter.

But Hills, as the coaching staff has preached all season, gives the Terps the best chance to win, not just against Rutgers but versus anyone. He’s the option they chose before the season, and they’ve stuck with him during the year.

“We all know Perry is the type of guy, he’ll play through anything, and I commend him for that,” Jacobs said. “He’s going to bring his ‘A’ game when he can, and when he can’t, that’s when I think that he’ll sit out.”

Hills doesn’t have to bring his “A” in either of the next two games, as long as he’s ready to help the Terps make the postseason in their final contest of the season.