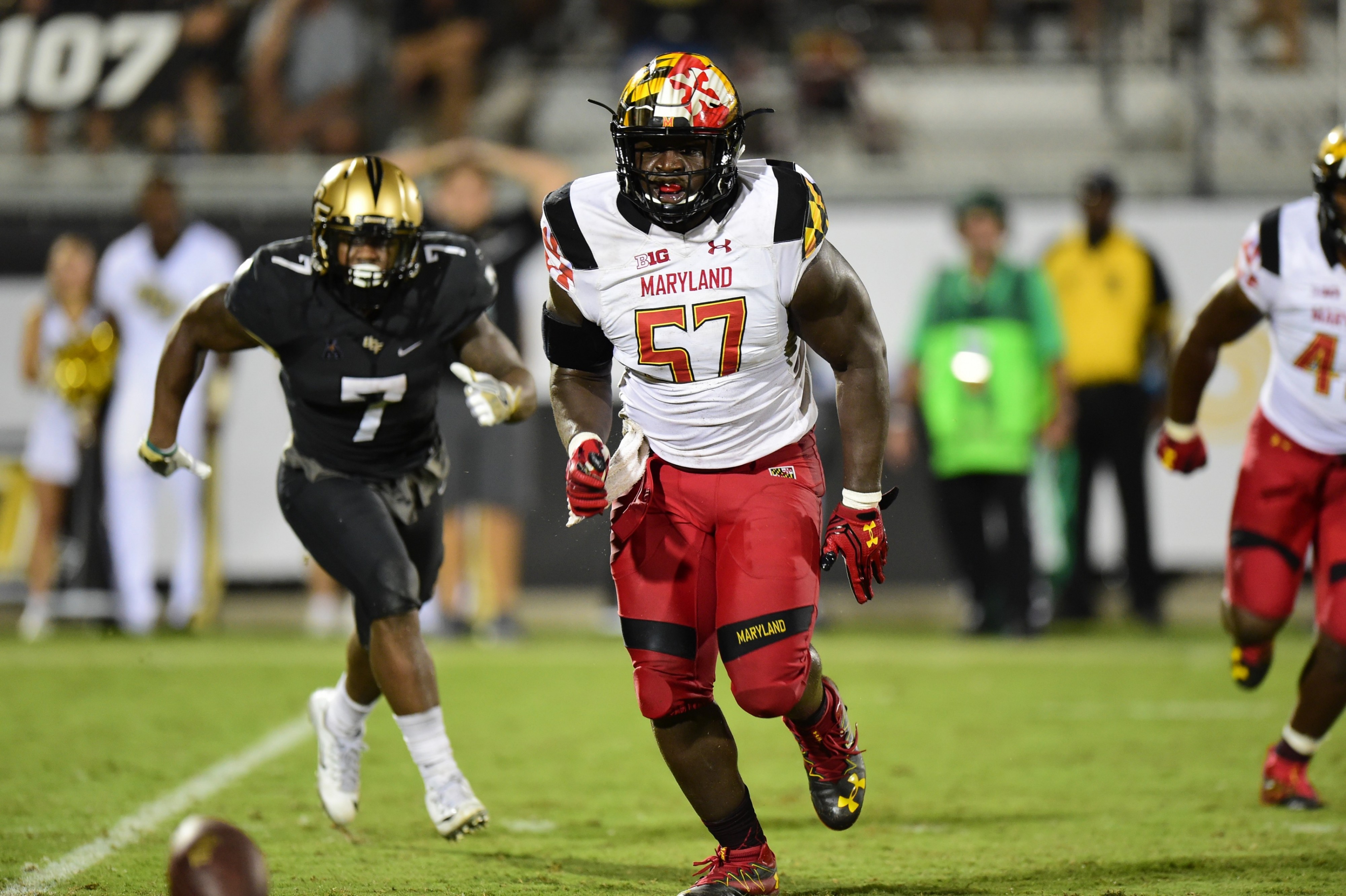 Before the Maryland football coaching staff arrived in the offseason, defensive lineman Kingsley Opara weighed 315 pounds, about 26 percent of which the redshirt junior estimated was body fat.

But upon working with strength and conditioning coach Rick Court, whose constant energy resonated with Opara’s enthusiasm and goofiness, he developed a new training and diet approach.

Out are the carbs and sweets, and in is Opara’s career-high production. The Jacksonville, Florida, native has recorded 29 tackles, seven for a loss, emerging as a starter who defensive coordinator Andy Buh thinks is one of the Terps’ most complete defenders.

When Opara, sitting at a round table in Tyser Tower, heard about Buh’s compliment, his eyes perked up.

“It’s pretty cool,” Opara said. “I honestly didn’t know he said that, but I just try to, like, be versatile. That’s it.”

The players serve as an inspiration for Opara — “My dream, of course, is to play in the NFL one day,” he said — and they’ve given him tips to improve his skills.

He’s worked on his hand placement and shedding blocks. He does a drill with a hula hoop to simulate bending around tackles and guards on rushes. He’s studied film to understand backfield sets and anticipate opponents’ moves.

“A lot of the things the guys told me is you’ve got to be as versatile as possible, so whatever coach Buh, coach Durkin need me to play to help the team win, I’ll do it,” Opara said. “If they want me to play quarterback, I’ll do it.”

Ngakoue visited the Terps a few weeks ago and watched Opara practice. The Jacksonville Jaguars rookie marveled at the improvements from one of the players he arrived with in the 2013 class.

“He was like, ‘Wow, I can’t believe how much of a better player you’ve gotten to be,'” Opara remembered. “They try to tell me that I’m just as good as they are, if not better, so I just try to pick their brains.”

This season, Opara is tied for sixth on the team with 29 tackles, 13 more than he logged last year in his first action as a Terp. He’s teamed up with defensive lineman Azubuike Ukandu to fortify the front seven coaches have lauded for limiting run-heavy offenses.

“He’s a big, strong athletic guy that oftentimes requires two or more blockers,” linebacker Shane Cockerille said, “which frees up for me and Jermaine [Carter] in the back end.”

But Opara can’t see the gaps he creates too clearly.

As he spoke with reporters Wednesday afternoon, wearing glasses with a thick, black frame, he admitted he doesn’t wear them in games. He doesn’t use contacts, either.

“I go out there blind,” Opara said.

The Terps assistant who relays signals from the sideline wears a bright shirt, so Opara knows where to look. And if he has trouble seeing, as he did during the rainy second half against Florida International, Opara asks a teammate for the call.

If he wore contacts, Opara would be afraid they’d fall out. The coaches haven’t forced him to because “they just let me do me,” he said.

That’s the trait Opara most appreciates about the new regime. Former coach Randy Edsall’s rules were stricter, but Durkin encourages the players to show their personalities.

So Opara sings in the locker room, dances at practice and pulls the occasional prank.

Earlier this season, he got a text message from one of the program’s class checkers, who keeps track of the players’ attendance. After Opara resolved the mistake, he copied the message, changed his name to Ukandu’s and pasted it in the team’s communication app, calling out his fellow lineman for the alleged infraction.

Despite tough coaching, high expectations and his professional goals that have materialized during his breakout season, that kind of leeway made Opara grin as he disclosed his plans after his interview.

He was going to celebrate one of his favorite times of the week: cheat day.