For beer and burgers before the UMD Homecoming game, head to the tennis courts 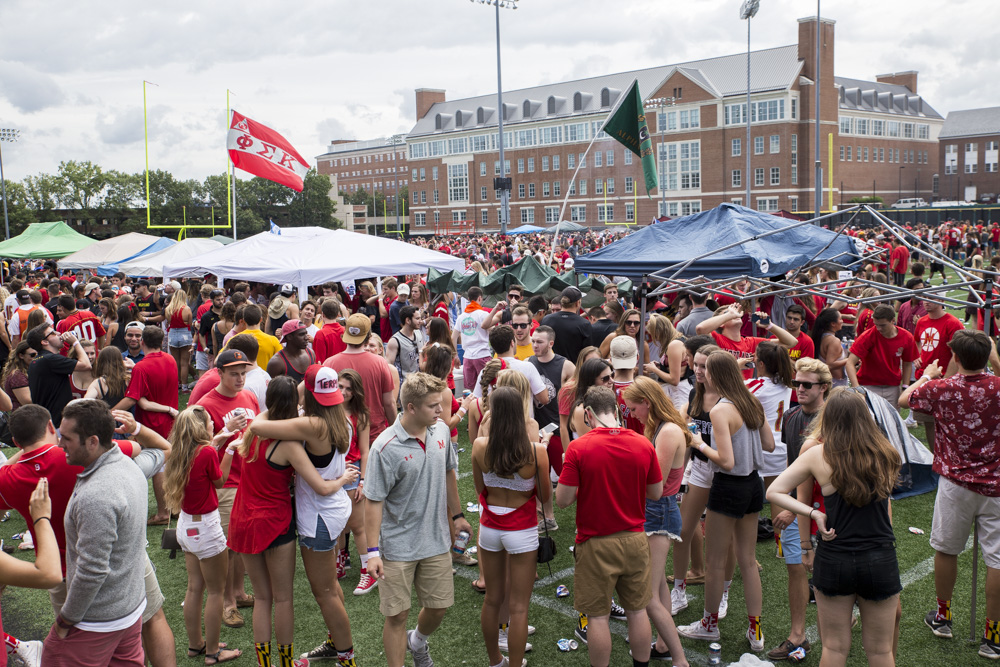 In preparation for Maryland's first home game of the football season, hundreds of members of the university's Interfraternal Council gathered on the practice football fields near Byrd stadium for a tailgate.

For the past four years, Terp Town, a beer garden Dining Services hosts each year, provided Maryland fans refreshments from an enclosed area on the grass behind Cole Field House.

However, with Cole undergoing construction, this year’s beer garden — which includes beer sales, food and activities two hours before games — is being moved to the tennis courts next to Lot 1, said Joe Mullineaux, the senior associate director of Dining Services.

The new name for the event is “Terrapin Beer Garden,” said Zack Bolno, Maryland Athletics’ senior associate athletic director. Although the majority of people who attend are alumni and families from visiting teams, he said the beer garden is open to everyone.

“The beer garden has been attended by fans, typically not students, but students are welcome to come,” Bolno said.

The beer garden normally offers a selection of two draft beers and a Mulligan’s Grill food truck that serves hot dogs, hamburgers and French fries, said Bart Hipple, Dining Services spokesman. The main attraction, however, is the alternative to a tailgate that the beer garden offers gameday patrons, he said.

“It was on its way to becoming a tradition for a certain group of people who didn’t want to bring a full tailgate themselves, but wanted to stop and have a beer before they went into the stadium,” Hipple said. “I’m very curious to see what it’s going to be like in the new paradigm here.”

Along with the change in location, there are a few other differences that will be seen this year with the event, including the name change, a new partnership and a different music scene. Music will be available at certain games, Bolno said. There was previously a band at each event.

“In the past, when it’s been down below, there has been a band,” Hipple said. “I don’t know what they’re going to do for music this year because there’s no space for a band.”

Mullineaux added in previous years, the Alumni Association for Athletics ran the event in conjunction with Dining Services, but this year, Maryland Sports Properties and Athletics is taking over.

Despite the changes that the beer garden has undergone for this football season, Mullineaux said the main focus is on the fans, regardless of what team they support.

“Visiting fans don’t really have the facilities to do tailgating, so they went to Terp Town,” he said. “I know that we got a lot of comments, particularly in the two years of the Big Ten, from the visiting team talking about Maryland’s hospitality with the beer garden,” he said. “It’s really all about enhancing the fans’ game day experience.”