How robotics research at Univ. of Md. could one day save lives 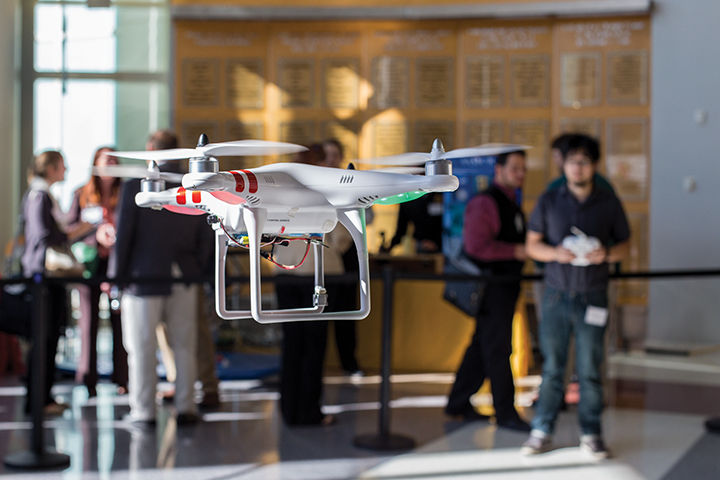 A menagerie of machines ­— fish robots, flying robots, robots with electroadhesive feet — rolled, flapped, buzzed and whirred around the entrance of the engineering building as part of a showcase of disaster response robots in the Maryland Robotics Center.

The event was part of Mpact Week, the second annual program that highlights research in the engineering school.

Because of the prevalence of environmental and man-made disasters from Ebola, earthquakes, oil spills and Wednesday’s tornado warning, the engineering college decided to make disaster resilience this year’s theme, said Darryll Pines, dean of the college and an aerospace engineering professor.

In such situations, humans can help engineer solutions, and robots have the potential to aid response and rebuilding, said SK Gupta, director of the Maryland Robotics Center.

“After a disaster, a lot of places become inaccessible and dangerous for humans to go to,” said Gupta, a mechanical engineering professor. “Robotics [can] play a big role in … situational awareness: what has happened, what the damage is, are there survivors?”

The robots on display did not always have much in common with one another — they were large and small, flying and swimming, stationary and screwball-fast. But all the teams noted how their machines would be of use during a disaster scenario.

The Tiny Terrestrial Robotic Platform, known as TinyTeRP, a stamp-sized machine that drove wildly back and forth, could help explore debris and small spaces that people can’t reach, said Matt Broczkowski, a junior mechanical engineering major.

“The idea is a robot like this could go through earthquake rubble and stuff like that, so we can find survivors or any type of information during disaster scenarios,” he said.

Another team designed software for a quadcopter, a small, sleek helicopter-like machine with four rotors. While the machine recorded the brightness of the Kim building’s floor Friday, junior Daniel Villalobos said that with its mini camera and software that detects image brightness, this quadcopter has potential to do far more.

“In a forest fire, you could fly one of these with a setup that uses this software to find the most intense areas of the fire so they can concentrate on those,” the aerospace engineering major said.

These projects might not be ready to go into action yet, but Gupta said he hopes robots will soon be adopted on a larger scale in disaster response.

This university’s Unmanned Aircraft Systems Test Site could be bringing its own robots into the field through its work with the Southern Maryland Electric Cooperative, known as SMECO. SMECO could use the UAS’s unmanned aerial vehicles in preparing for disaster response, said Matt Scassero, director of this university’s UAS Test Site.

Their machines might also include an electromagnetic field sensor to establish the presence or absence of electricity, Scassero said. The UAS Test Site’s unmanned aerial vehicles, which can reach 20 feet in wingspan, were not being demonstrated in the Kim Building.

Mpact Week, which runs from Oct. 16 to Wednesday and features everything from talks about Ebola to forums on public policy, focuses on engineering real solutions that can affect people’s lives, Pines said.

Not only do robots have the potential to help respond to disasters in the future, but they have already played a part, he said, referencing the Deepwater Horizon Gulf oil disaster in April 2010.

“The final solution was underwater robotics that could operate in extreme, one mile below the surface of the ocean environment,” Pines said. “Even though it was a human-made disaster that we created, another human-made solution we created helped stop the environmental disaster.”