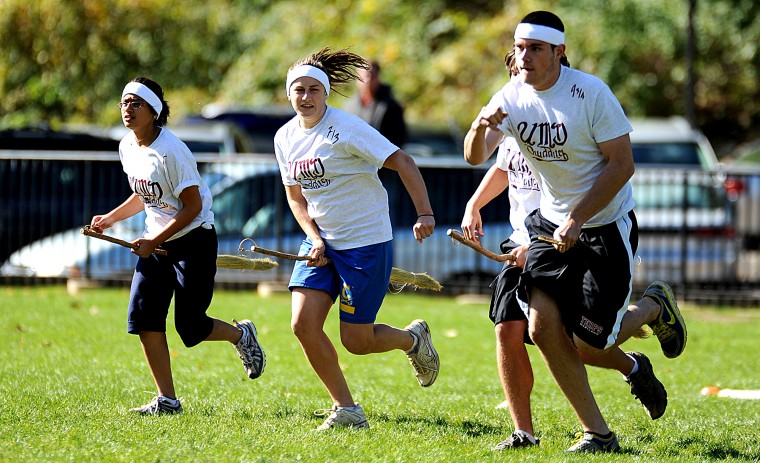 Over the weekend, this university’s chapter of the International Quidditch Association traveled — by bus, not broom — to Chestnut Hill College in Pennsylvania to participate as one of 16 teams in the Brotherly Love Cup. Although this university’s quidditch team only won one game of the three they played, members said the experience has boosted their confidence and helped legitimize them in the quidditch world.

In the muggle world, however, it’s a different story.

Since the team formed last fall, members of the group said they have received plenty of attention from passersby and spectators during their biweekly practices on McKeldin Mall. While some sit and appreciate the anomaly, others, team members said, scoff at the sight of students running with brooms between their legs and launching dodgeballs at each other in a sort of organized chaos that only makes sense to those who understand the game.

“I’d say we’re pretty well known,” said sophomore chemistry and German major Deanna Edmunds, the team’s treasurer. “We have a lot of spectators. Some days it seems we have as many spectators as players.”

Watching one of the Quidditch team’s practices is more like witnessing a combination of other, less magical, games.

In the Harry Potter series, where the sport is aided by characters’ ability to fly, several of the props move around of their own accord. The Golden Snitch — arguably, the most important ball in the game — flies around, dodging players and evading each team’s Seeker, whose job it is to capture the Snitch. The Bludgers — two self-directing and player-attacking balls — are manipulated by Beaters who use clubs to launch them at the opposing teams’ players in the hopes of knocking them off their broomsticks.

But on the ground, the Snitch is a person who runs and hides from both Seekers, who are trying catch the flag the Snitch carries. On the field, the Chasers attempt to score in one of the opposite team’s three rings while Beaters throw Bludgers (dodgeballs) at members of the opposing team.

Although more than a dozen students show up to the team’s practices, only 10 players made the trip to the Brotherly Love Cup on Saturday: two Keepers, six Chasers, and two Beaters. Two of the Chasers alternated as Seeker during the three games. During the tournament, the Snitch was a runner supplied by Chestnut Hill College.

In their first game against another college, the Quidditch team beat Johns Hopkins University 70-10. They then advanced to play Vassar College, a team sporting hot-pink capes that several players said has placed highly at the Quidditch World Cup for the past several years. Vassar narrowly beat the Terps in a 70-60 showdown that lasted for more than 10 minutes. The Terps also competed against one of the Chestnut Hill teams, called the Red Rockets, who won by 70 points.

“It was definitely exciting just to play against another team for the first time,” said Courtney James, a senior art studio and communication major and a Chaser. “It kind of legitimizes like, all the practices we’ve been doing from the past year and a half.”

The players may not fly, and may look awkward running while straddling a broom, but no one at Saturday’s tournament could argue that the teams weren’t serious.

In their last game before being eliminated, senior criminology and criminal justice major Linda Chin — the team’s Keeper and vice president — struggled with an opposing player over the Quaffle. Although she emerged from the scuffle unscathed, the other player suffered a broken pinkie finger.

The players, who do not wear any padding, said several people were surprised by how violent things got at times. An ambulance remained on standby throughout the tournament.

“I think it was really good to just see us in action as a team,” said sophomore computer science major Patrick Rardin, a Chaser whose number is 9 3/4 — an allusion to the train platform from which students leave to Hogwarts School of Witchcraft and Wizardry. “We certainly lack the experience of other teams, but make up for it with enthusiasm.”

Team members agreed the experience taught them a lot.

“This whole tournament was a really great experience,” said sophomore computer science major Vinija Jain, a Chaser. “Now we know what our competition is like.”

Team captain Logan Anbinder, a junior philosophy and physics major who acted as a Seeker during Saturday’s tournament, said he hopes the team can host a competition of their own on this campus sometime in the future.

“We’re trying to host Hopkins at some point,” said Anbinder, a self-proclaimed “Harry Potter doppelganger” who caught the Snitch during the game against Vassar.

During the team’s final match, the Hopkins team began chanting “Let’s go Terps!” from the sidelines. And at the end of every game, players lined up to shake hands and congratulate each other on a match well fought. Team members said part of the allure of Quidditch isn’t the magic, it’s the community.