Newly healthy women’s basketball gets another shot at Connecticut 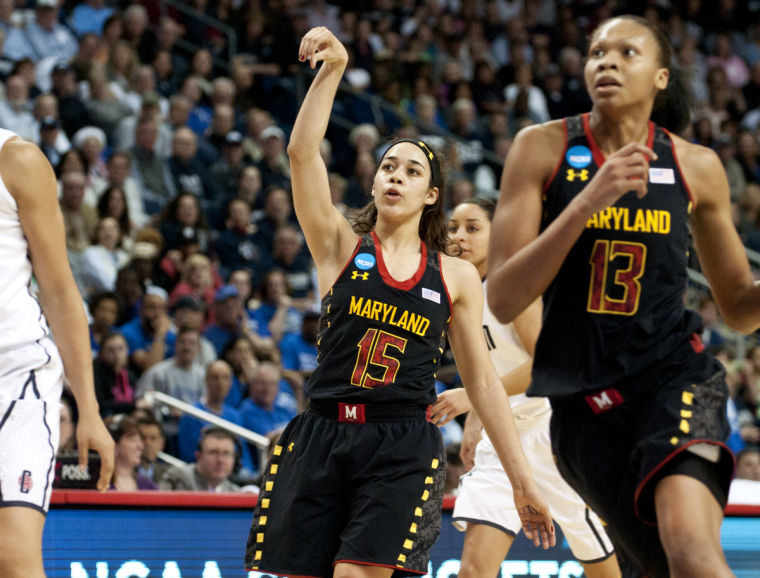 Last season, Laurin Mincy was heating up at the right time. A game before the Terrapins women’s basketball team’s marquee matchup at Connecticut, the guard had 16 points and was shooting 4-of-4 from three-point range against Nebraska in late November.

With about 15 minutes left in the second half, Mincy tore her ACL, ending her season. Five days later, an injury-riddled Terps squad posted their worst scoring output of the season in a 63-48 loss to the Huskies.

It’s been almost a year since then, but Mincy will finally get to face one of the nation’s elite basketball programs. When the No. 8 Terps play No. 1 UConn at Comcast Center tonight, they won’t have the same uphill battles they have dealt with in past games against the Huskies.

The Terps faced UConn twice last year, with a 76-50 loss in the Sweet 16 to end the Terps’ season. Though the team provided a challenge early in both games, it couldn’t overcome its disadvantages.

Mincy, guard Brene Moseley and center Essence Townsend missed the first matchup with season-ending injuries, and forward Tierney Pfirman joined them on the bench for the Sweet 16 contest, significantly thinning the Terps’ rotation. Last year’s games were also in Connecticut, at the XL Center in Hartford and Webster Bank Area in Bridgeport, so the shorthanded Terps had to face the Huskies in a hostile environment.

Now, UConn (2-0) will visit College Park to face the rejuvenated Terps (2-0), who have a number of valuable additions. Guards Lexie Brown and Shatori Walker-Kimbrough headline a recruiting class that has bolstered the Terps’ guard unit, which will look to use its athleticism in the team’s transition offense.

“We’re going to be able to absolutely be able to use our speed and our quickness,” coach Brenda Frese said. “We’re a different team for sure.”

They are a part of a Terps backcourt that has changed drastically over the past year. Mincy and Moseley, who is also returning from a torn ACL, give the Terps more experience at guard. Mincy was a top scoring option two seasons ago, averaging 13.1 points at shooting guard, while Moseley was projected to be the starting point guard last season.

The two are established components of the team’s rotation, and they look to return to the form they had prior to their injuries. Mincy and Moseley’s presence has also helped Brown and Walker-Kimbrough prepare for their first high-profile matchup under the Comcast lights.

“I already see our freshmen really excited,” Mincy said. “We have a lot of time to prepare and get them ready so they’re not too overwhelmed for this game.”

The depth could help relieve some of the burden on forward Alyssa Thomas, who struggled against UConn in both matchups last season. The two-time ACC Player of the Year shot 6-of-28 from the field and committed 10 turnovers in her encounters with the Huskies.

Entering the Sweet 16 matchup, the Harrisburg, Pa., native scored at least 26 points in four straight games. That streak ended against UConn, which held Thomas to 13 points on 4-of-16 shooting.

“I think I just tried to force a lot,” Thomas said. “I really didn’t let the game come to me, so this time I just got to feel the game out and just go with the flow.”

Thomas’ new role in the offense this season, which positions her in the post more often, will help the Terps compete against the Huskies’ inside presence. UConn outscored the Terps in the paint, 40-18, in their last matchup and even outmuscled them in rebounds, 41-36.

While returning players and new additions change the Terps’ makeup entering the game, UConn will also have a different look because of injury. Star forward Kaleena Mosqueda-Lewis won’t play tonight after suffering a nerve contusion in her elbow Monday during the Huskies’ 76-57 win against No. 3 Stanford.

Mosqueda-Lewis, an Associated Press preseason All-American, averaged 17.6 points and 6.3 rebounds and shot 49.2 percent from three-point range last season. UConn also won’t have forward Morgan Tuck, who averaged 6.4 points and 3.4 rebounds and is a valued part of the Huskies’ bench unit.

Still, UConn has forward Breanna Stewart, another preseason All-American, and center Stefanie Dolson, who snagged 18 combined rebounds in the games against the Terps. Center Kiah Stokes came off the bench and had 10 points and 13 rebounds against Stanford, and starting guard Bria Hartley led the team with 20 points.

“They continue to be able to go to their bench and their depth,” Frese said. “They have so many weapons.”

In the Terps’ past two games against UConn, there were multiple factors working against them. Mincy’s torn ACL a game before their first encounter continued the Terps’ season-long narrative of injuries, and the Huskies took advantage of the team’s deficiencies.

But with an enhanced roster and a different venue, the Terps look to achieve a different result.

“There’s a lot of different factors,” Thomas said. “It’s definitely going to be a different game this time.”