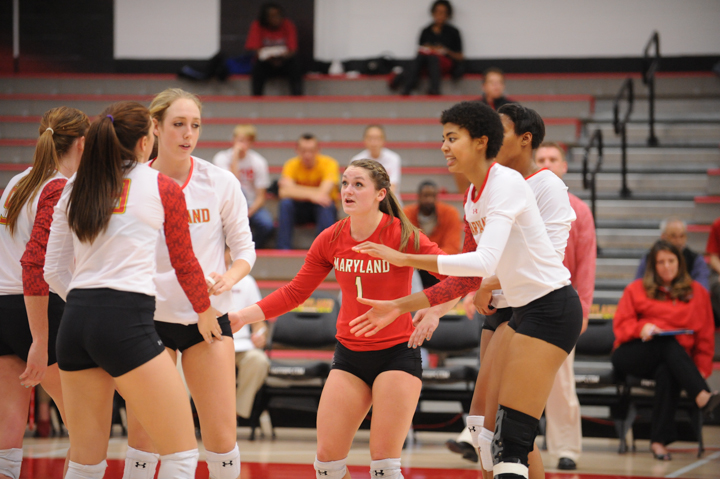 Libero Sarah Harper brings in the team after they lose a point to Pitt in the 3-1 victory over the Panthers on Oct. 30, 2013.

Sarah Harper desperately wanted to be a few inches taller. She was 15 years old when she was at the kitchen table in her Charlottesville, Va., home seven years ago and let loose on her mother, Becky Swartz.

“Why couldn’t you and Dad [have] been taller?” Harper screamed.

Her father, Jack Harper, is 6 feet tall, her mother is 5-feet-2 and Harper is just

5-feet-4. While Harper’s work ethic and talent had landed her a spot as an outside hitter on Western Albemarle High School’s varsity volleyball team when she was in the eighth grade, her relatively diminutive height had seemingly cast her as unworthy of playing in college.

Before Harper became a standout libero for the Terrapins volleyball team, she idly watched as her peers committed to Division I colleges before they began their junior year of high school, but her coach said she likely wouldn’t fit in a Division I school and that perhaps she should call Ferrum College, a Division III school a few hours away.

As a child, Harper frequently attended her older sister’s volleyball tournaments. Soon enough, she declared her desire to play college volleyball, preferably in the ACC. She obsessively dedicated herself to the sport. At times, her mother would catch her bouncing a ball against the house late into the night, the porch light illuminating the dark night sky.

But Harper still had her doubters.

“I hate to say this,” Jack Harper said. “You can quote me. As short as she is, I never thought she’d be [playing] volleyball.”

Fast-forward past that day in her family’s kitchen to the present. Sarah Harper has achieved her goal of playing in the ACC and is on the verge of accomplishing more than she ever imagined.

She originally joined the team as a walk-on, and this university’s tuition nearly forced her to leave. She likely could have committed to a less prestigious program, but she wanted to play in the ACC.

Now the Terps’ unquestioned leader, Harper is on pace to break the program’s career digs record this weekend when the team plays Duke and Wake Forest, as she sits 42 digs behind Nicole Lantagne on the all-time list.

“She’s just a kid that never gives up,” Swartz said.

When most teenagers get in trouble with their parents, it’s because they threw a house party or earned poor grades. Sarah Harper was frequently sent to her room by her mother, but she wasn’t guilty of either of those transgressions.

She just played too much volleyball.

Harper spent countless nights in front of her home, volleyball in hand. Tucked between her bedroom window and the front door was a perfect spot for Harper to practice her serves.

She’d sneak outside, thinking her mother couldn’t hear her. A few times, Swartz found her bouncing the ball as late as 11 p.m.

“Thank gosh we have a brick house,” Swartz said. “I don’t think she broke any windows. I said, ‘If you break a window, that’s it.’”

Harper added, “I hit a couple windows. She probably wasn’t very happy about it.”

Inspired by her older sister and her teammates, Harper would perform drills inside the house. One routine called for her to jump as high as she could and touch the top of the net. Her family didn’t have a net, though, so the tops of doorways had to suffice.

“I would be jumping through the house, touching all the doorways,” Harper said. “There was dirt all above the top of the doorways.”

Despite her athletic ability and passion for the sport, it appeared Harper wouldn’t be able to continue playing volleyball at a high level after high school.

Her high school coach, who placed Harper on varsity when she was in the eighth grade, suggested that because of Harper’s size, she would be a good fit at a Division II or Division III program.

“Absolutely not,” she said. “My dream had been Division I. When I heard that, I was just like ‘I’ll prove you wrong.’”

Harper’s late nights hitting volleyballs against her house finally paid off when she got asked to play for U-TURN after her junior year of high school.

U-TURN is a club team based in Richmond, Va., that receives national exposure and has a reputation for churning out high-level college players. Donald Gresham, the club’s director of volleyball, first saw Harper when his team played her lower-level club team.

“We were wondering who in the world that child was,” Gresham said. “We found out and went and got her.”

So in the summer before her senior year, Harper would drive an hour from Charlottesville to Gresham’s gym in Richmond five days a week after her shift at a local coffee shop. She spent five hours each day training with Gresham.

They worked on her defensive passing style, swing, serve and conditioning.

“Sarah’s a rabbit anyway,” Gresham said. “If Sarah Harper was 6 feet tall, she’d be on the Olympic team. She’s fast. If you look at the way she’s built, she’s got heavy legs, heavy thighs and a jumper’s butt, and her arms are really, really quick.”

“I’ve been doing this 35 years. I’ve coached a whole bunch of high school All-Americans, a bunch of college All-Americans,” Gresham said. “I have never met a child who was more determined to play Division I college volleyball in my life.”

One of U-TURN’s graduates, Brittney Grove, was a junior middle blocker for the Terps four years ago. When Grove came back to visit one day, she noticed the 5-foot-4 outside hitter with the tireless work ethic.

Grove told Terps coach Tim Horsmon about Harper, so Horsmon told an assistant coach to scout her. And the Terps’ staff agreed that Harper would be a good fit in College Park.

Upon visiting, Harper was set on attending this university.

“If we can work it out for me to be walk-on the first year,” Harper told her mother, “then I’ll work as hard as I can to get a scholarship.”

Harper joined the Terps as a walk-on in 2010. While she wasn’t a regular starter, Harper made an impact for the Terps in her rookie campaign as a defensive specialist. She ranked fifth in the ACC with 0.29 service aces per set, and she was named to the Villanova Classic All-Tournament team after securing 32 digs over three matches.

“I was like ‘I’d just love to be able to travel,’” Harper said. “Like practice the whole time. I was thinking I was going to be shagging balls.”

Still, the thought of earning a scholarship to help her family loomed large in her mind.

Finally, during the Terps’ annual summer camp in 2011, Harper was sitting in the camp store with Horsmon when the coach delivered the news Harper never thought she’d hear.

“So, I found you a scholarship,” Horsmon said.

“She was squealing,” Swartz said with a chuckle.

Still, the scholarship would only pay for Harper’s sophomore and senior seasons.

But in her first scholarship season, the then-sophomore played, started and recorded 569 digs, breaking the program’s single-season record.

Horsmon and the university rewarded Harper by extending her scholarship to cover her junior season.

“[Leaving] would have been horrible,” Harper said. “Luckily, everything happens for a reason.”

From sneaking out past her bedtime to practice serves to spending the summer before her senior year of high school driving to Richmond, Harper has worked at her sport. That mentality has carried over to College Park.

“If there’s a ball going towards to the bleachers, she’s going to dive into the bleachers,” outside hitter Mary Cushman said. “She’s the one diving into walls. She changes shirts pretty much every practice because she’s sweating so much.”

Harper will soon gather her belongings from Comcast Pavilion, clear her locker and stash her jersey for safekeeping.

The match against North Carolina on Nov. 24 will be the last time she dons her No. 1 Terps jersey at home and steps onto the court where she transformed into a leader. But if she records 42 more digs this year, her name will be etched into the Terps’ history books forever.

“You’ve got to understand, all the odds are stacked against her,” Gresham said. “Every last thing is stacked against her — her size, where she came from, the high school she came out of, her family’s economic situation. And this kid succeeds even though all this stuff that’s pushing in the opposite direction. She wants it bad.”